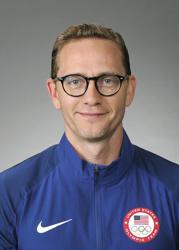 Summers, a former U.S. Senior and Junior Men’s Saber National Team member and alternate to the 2000 Olympic Games, joined the USA Fencing Sports Medicine staff in 2009. After leading the program on a volunteer basis since 2012, Summers became the organization’s first full-time sports medicine staff member in 2015, helping the organization significantly to increase support sports medicine coverage for the national teams.

During his tenure, Summers was crucial in the evolution and development of a volunteer and diverse medicine team of multidisciplinary sports medicine providers, providing coverage at national and international events. Summers served as the head of sports medicine staff at seven Senior World Championships, three Pan American Games, and two Olympic Games. He also has served as a member of the FIE Medical Commission since 2016.

After retiring from fencing in the early 2000s, Summers completed his Doctor of Chiropractic and Diplomate as a Chiropractic Sports Physician. Prior to joining the USA Fencing staff, he worked in private practice at the Soft Tissue Center at D.I.S.C. in Marina del Rey, Calif.

“It has been an absolute honor to serve and represent the sport of fencing, its athletes, parents, coaches, and USA Fencing as an organization. I look forward to supporting the development and evolution of the USA Fencing Sports Medicine department and assisting USA Fencing in future roles of support,” Summers said. “I want to thank all our sports medicine providers for their voluntary passion and elite knowledge within the sports medicine profession in supporting the sport of fencing and our national teams. Additionally, thank you to our partners, fencing staff, coaches, and especially the USA Fencing National Team athletes for their support over the years.”