USA Fencing is pleased to announce the national events schedule for the 2022- 2023 season, along with a not-so-official list of iconic post-piste eats! 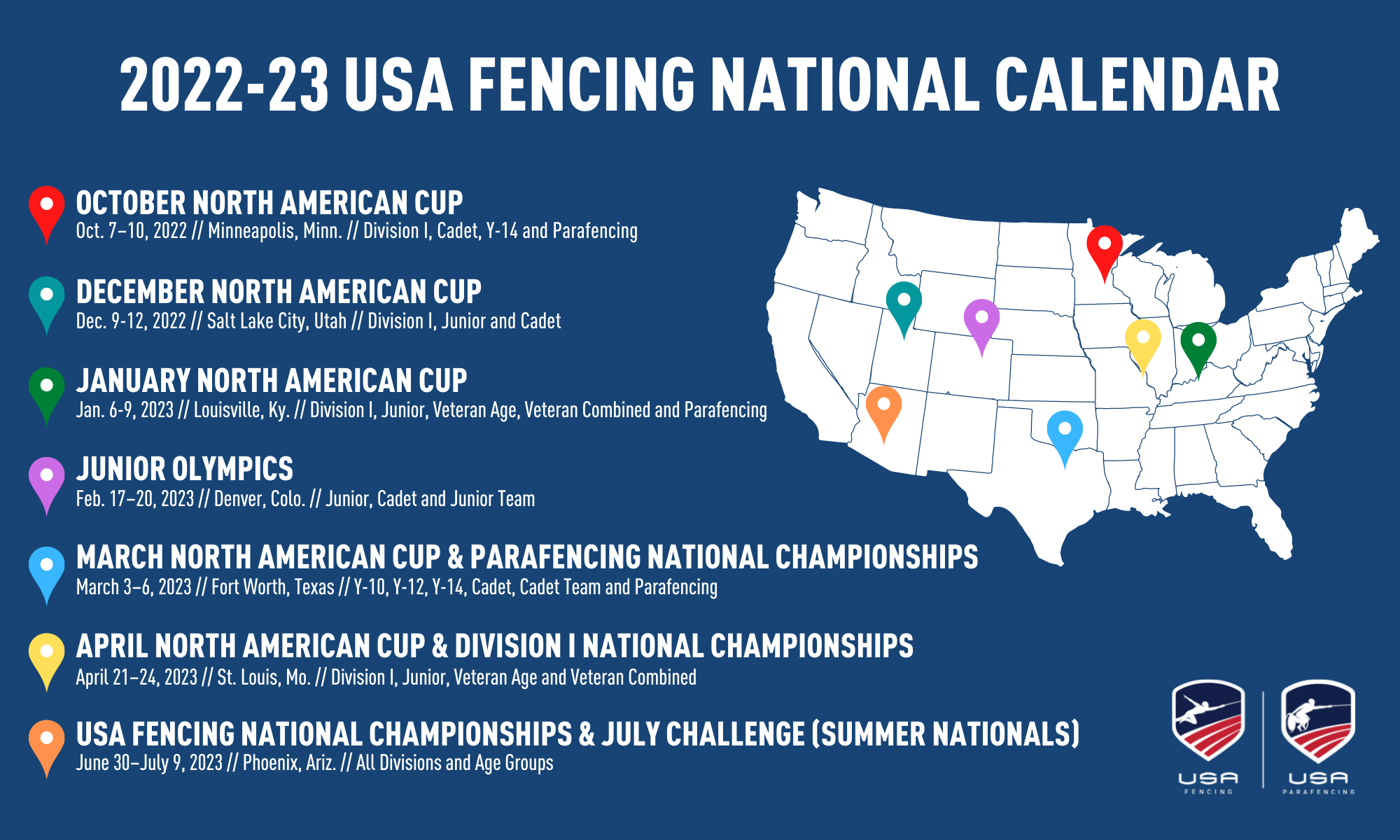 Want to skip out on the post-piste eats and deets?  Scroll down for daily schedules and hotel booking links.

(COLORADO SPRINGS, Colo.) – USA Fencing is pleased to announce the national events schedule for the 2022- 2023 season, along with a not-so-official list of iconic post-piste eats!

The 2022 season opens Oct. 7-10 in Minneapolis, Minn., at the October North American Cup. Division I and parafencing athletes will be in action in Minneapolis with the Division I event serving as a domestic qualifier for the 2023 Senior World Championship Team. Cadet fencers will also be competing. Points will be on the line in Cadet for qualification to the 2022 Junior Olympics and the 2023 Junior and Cadet World Championships.

Looking to refuel after the October North American Cup? Minneapolis is known for a plethora of top comfort dishes, but the Hotdish is the highest on this award podium. The first “hot dish” recipe on record came from a 1930 cookbook as a one-dish meal and while its sophistication has grown in recent years, there’s a good chance tater tots will top this cheesy delicious dish.

Cadets, as well as juniors, will have an opportunity to pick up points and even a signature Crown Burger as we head west Dec. 9-12 for the December North American Cup. Host Salt Lake City, Utah, is the home of the legendary cheeseburger crowned with griddled pastrami and Utah fry sauce.

Hungry for more competition? Jan. 6-9 we venture south for the January North American Cup. Host city Louisville, Ky., is not only home to Olympian Lee Kiefer but is also the home of the Hot Brown. Created at the Brown Hotel in downtown Louisville, the Hot Brown is an open-faced sandwich with bread and turkey covered in cheesy mornay sauce, topped with bacon and tomato then toasted in the broiler and served hot.

The NAC circuit moves from sea level to the Mile High City of Denver, Colo., for the Junior Olympic Championships, which is also the site of the final domestic qualifier for the Junior and Cadet World Team. Looking for some post-piste victory eats? Known for their Mile High frosted pastries, Voodoo Donuts’ weirdly delicious doughnuts are covered in anything from breakfast cereal to bacon—should be at the top of your Denver eateries.

Our mouth-watering NAC schedule continues onward as we head to Fort Worth, Texas, for some phenomenal BBQ Brisket and the March North American Cup. Many fencers will be competing for the first time as top youth athletes in Y10, Y12, Y14, Cadet and Cadet Team events. While there are many new competitors in the Fort Worth BBQ food Division, no FortWorth trip is complete without a trip to south side Heim’s trailer for their mouth-watering brisket.

Contesting both individual and team events for Division I, the NAC circuit advances to the city of St. Louis, Mo., April 21-24 for the Division I and Parafencing National Championships and April North American Cup. While in the Gateway City, some of the country’s top athletes will fence for national titles while competing for a spot on the 2023 Senior World Championship Team.

During the April North American Cup, Veteran legends will continue their quest for a position on the Veteran World Championship Team while we continue our quest for out of this world eats in St. Louis. Coming in at an undisputed No. 1 is none other than the iconic toasted ravioli. The crunchy pasta, dusted with grated Parmesan cheese and dunked in a marinara-style sauce, is a local passion of St. Louis.

The final event of the season – the National Championships and July Challenge – heads to Phoenix, Ariz., for the first time in the event’s history. From June 30 through July 9, national titles will be awarded to individual divisions (outside of groups Division I, Junior and Cadet.) Expected to be the largest fencing tournament in the world, more than 5,000 competitors are expected to attend with 96 gold medals awarded.

No stranger to gold in the delectable pastry division are the Marranitos from La Purisima Bakery in Phoenix. These fluffy, animal-shaped cookies are a cross between a sweet bread and a cookie, making them the perfect post-match snack!

Disclaimer: while our food journey is certainly not approved by our Director of Sports Medicine or recommended by any coaches…it is approved by our in-house USA Fencing food-tasters.