Lee Kiefer Inducted Into FIE Hall of Fame, Cementing Her Status as a Timeless Legend of Fencing

The 2021 Olympic gold medalist and six-time medalist at the Fencing World Championships was elected to the Hall of Fame of the International Fencing Federation. 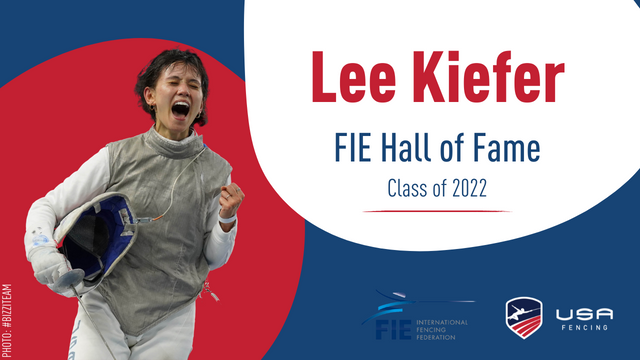 Kiefer, the 2009 Division I national champion, four-time NCAA champion, six-time medalist at the Fencing World Championships and 2021 Olympic champion, was elected to the Hall of Fame of the International Fencing Federation on Friday, confirming what fencing fans around the world have long known: Lee is a legend.

The honor ends an incredible 12-month span for Kiefer, who finishes the 2021-22 season as the world’s top-ranked women’s foil fencer. The gold medal in Tokyo, while technically part of the 2020-21 season, kicked things off. Kiefer then won silvers at World Cup events in France and Mexico and a bronze in Serbia.

In April, Kiefer won gold at the World Cup in Tauberbischofsheim, Germany, followed by another gold in May at the Incheon Grand Prix in Korea. She concluded the season with a pair of medals at the 2022 Fencing World Championships in Egypt: a team silver and individual bronze.

Kiefer learned of the news at a team dinner on Friday night in Cairo, with her teammates, parents and coaches in attendance. At the end of the meal, Women’s Foil National Coach Ralf Bissdorf got the group’s attention to make the special announcement.

“I couldn’t believe it and was very confused at first,” Kiefer says. “This honor is a testament to the amazing humans who have believed in my fencing career and helped it blossom.”

Each year, the FIE’s Executive Committee can induct a maximum of four athletes and one member of the “fencing family” — someone who made great contributions to the sport off the strip.

Kiefer is part of a 2022 class that includes:

While a hall of fame induction in some sports signifies the end of an athlete’s competitive career, Kiefer is far from done fencing. She plans to continue working tirelessly for the 2024 Olympics in Paris.

“I still have goals I want to accomplish in fencing, so I will do my best to not let it get to my head,” Kiefer says, laughing.

Others from Team USA in the FIE Hall of Fame

The FIE Hall of Fame was established in 2013. To date, these athletes and members of the fencing family who represent the United States have been inducted: