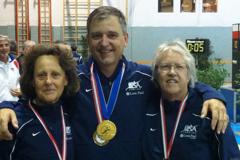 
(Colorado Springs, Colo.) – Just a year after qualifying for his first Veteran World Championships, 52-year-old Will Milne (Redwood City, Calif.) reached his goal of standing on the top of the podium in the men’s 50-59 saber event in Krems, Austria on Thursday.

“Winning is an incredible feeling,” Milne said. “The crowd was pretty big and I wanted to show some good solid fencing.”

Milne entered the direct elimination tables as the top seed in the 45-man event after going undefeated in the pools.

Milne won his next bout against Jerome Poupart (FRA), 10-7, and advanced as one of three Americans in the quarter-finals.

Milne secured his first Veteran World medal after his next win over Barry Caulter (GBR), 10-8.

In the semifinals, Milne edged Bernd Brock (GER) by a single touch for a 10-9 win.

“My goal was the final bout and I was nervous and fencing too simple. The score was 9-9 and honestly I got lucky and closed him out with one light for the win,” Milne said.

In the gold medal final, Konstantin Volkov (RUS) took a 3-0 lead, but Milne regrouped to cut the Russian’s lead to 5-3 at the break.

“I dropped the first three touches of the bout in short order, but I calmed down a bit and brought it back,” Milne said.

In the second half, Milne held Volkov to one touch as he closed out the bout, 10-6.

“My fencing was tentative in the first half; I was being very cautious. At the break, Coach [Vladimir] Nazlymov told me to go after him hard and take some risks. After the break, I gave up the first touch and then took the next seven to put it away,” Milne said.

“Coach Nazlymov was a huge help. His encouragement and expertise was vital for me. I don't think I would have made it out of the round of eight without him. Thank you to USFA for sending him along!” Milne said.

Although he placed 10th at the 2011 Veteran Worlds, Milne said he came to Austria focused on improving on his previous result.

“Last year my fencing was sloppy and unfocused. My coach, Jay Choi, worked with me in both areas and I feel it made the difference,” Milne said.

Two of Milne’s teammates finished in the top eight of the 50-59 men’s saber event. First-time Veteran World Team member Val Kizik (Indianapolis, Ind.) earned a bye into the table of 32 and defeated both of his next two opponents – Ismail Pashapour-Alamdari (AUT) and Laszlo Takacsy (HUN) – by scores of 10-7. Kizik placed seventh overall after a 10-9 loss to Volkov in the quarters.

A silver medalist at the 2010 Veteran Worlds, Don Anthony Jr. (Columbus, Ohio) came to Austria as a member of his second veteran team and finished the pools ranked 15th after a 3-2 result.

Anthony earned a bye into the table of 32 where he defeated Ruggero Busetti (ITA), 10-8.

In a rematch of their 2010 gold medal bout, Anthony defeated Vittorio Carrara (ITA), 10-9, to advance to the quarter-finals. Anthony lost his next match, 10-7, to Thierry Jamgotchian (FRA) and finished the day in eighth place.

After a 4-3 victory in the semifinals over Liubov Mayorova (RUS), Offerle lost a 9-3 final bout against nine-time Veteran World medalist Clare Halsted (GBR).

Offerle will have less than 24 hours to recover from her silver medal finish before returning to the strip on Friday for a chance at a second medal in the 60-69 saber event.

Seventy-one-year-old Patricia Bedrosian (Malibu, Calif.) came to Krems with 13 past Veteran World Teams to her credit.

On Thursday, Bedrosian won her second bronze medal at the Veteran Worlds when she finished third in the +70 women’s epee event.

Seeded second after the pools, Bedrosian earned a bye into the quarter-finals where she defeated Motoko Kitami (JPN), 5-3.

In the semifinals, Bedrosian met Marie Chantal Demaille (FRA) who won the bout, 10-4, and went on to earn her 11th Veteran World title.

Biebel was seeded second after the pools and defeated his teammate, Rinaldo Campana (McLean, Va.), 10-3, in the table of 16.

In the quarter-finals, Biebel lost to Fabrizio Filippi (ITA), 10-7. Biebel finished in fifth place and Filippi went on to win his third Veteran World bronze.

Competition continues on Friday with the following events being contested: