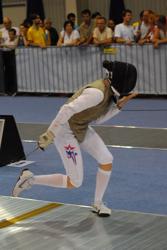 (Budapest, Hungary) – Team USA was one of just six countries to advance full teams of women’s foil and epee and men’s saber athletes to the table of 64 at the Senior World Championships later this week.

The U.S. Women’s Foil Team fielded just two athletes in the qualifying rounds on Monday as London Olympians Lee Kiefer (Lexington, Ky.) and Nzingha Prescod (Brooklyn, N.Y.) were exempt from the prelims due to their seeds as the sixth and seventh-ranked women’s foil fencers in the world, respectively.

“The beginning of the day was really hard. I didn’t feel focused … I had a little breaking point in the middle of the pool, but, once I got over that, I was able to focus again. I talked to Simon, my coach, and [2004 Olympian] Dan Kellner and they sort of refocused me and I was able to fence well throughout the rest of the pool,” Ross said. “We talked a little bit about coming back to things I knew and that I’m really good at. We call them home actions. Just a couple things that were pretty basic – keeping my point on target, moving, slowing down … I was fencing really fast and trying to force actions. So not forcing actions, letting the other person come to me. Those sorts of thing really helped me focus.”

Ross closed out her pool with a total of five victories and one loss to advance directly into the table of 64 on Wednesday.

While she has fenced at both the 2010 and 2011 Senior Worlds where she earned a top-32 finish at the former and top-16 at the latter, Ross said that her experience at the Games helped make her more prepared for her third Senior Worlds.

“Fencing in the Olympics and having that humbling experience and then going straight into competing at NACs and World Cups has given me a new perspective. I’m a little less fragile than I used to be. I have a little bit more perspective on each bout and each touch now,” she said. “It’s been a year since the Olympics has passed and it feels really special to think about that time and remember that it seems like just a few days ago that I was in London. I feel a lot more experienced and ready to handle challenges so that gives me confidence.”

With a final season of junior eligibility left, 19-year-old Margaret Lu (Greenwich, Conn.) made her Senior World debut in Budapest.

The four-time Junior World medalist won three bouts and lost two in the pools to advance to the table of 64 as the 42nd seed.

In the men’s saber competition, Lu’s teammate at the past three Junior and Cadet World Championships, Eli Dershwitz (Sherborn, Mass.), surprised the field when he went undefeated in the pools. A two-time Junior World medalist with just two Senior World Cups under his belt, Dershwitz fenced in a short pool, but gave up no more than three touches to any of his opponents and finished fifth in the pools.

“I was really nervous starting off, but Daryl was really helpful. He sat down and talked to me, made me laugh a little bit and I didn’t have time to be nervous, so that was really helpful,” Dershwitz said of his teammate, London Olympian Daryl Homer (Bronx, N.Y.) who was the only U.S. men’s saber fencer to be exempt from pools in Budapest. “I felt great. I had a few easier bouts at the beginning and by my hardest bout I was ready for it.”

Dershwitz said he plans on taking his bouts on Wednesday one at a time.

“No matter who I fence, I’m going to have to try really hard against him and I just want to try and fence as long as I can for as hard as I can,” Dershwitz said.

Spear and Ochocki each earned byes out of the preliminary table of 128 where Spear held on for a 15-14 victory over Kohta Arai (JPN) and Ochocki dominated his bout against Teddy Weller (ISV), 15-4.

Fencing at her fifth Senior Worlds, 2012 Olympic team bronze medalist Maya Lawrence (Teaneck, N.J.) advanced directly out of the women’s epee pools and into the table of 64 for the first time at this event in her career.

Lawrence lost her opener, but won five straight to finish the pool rounds.

“I got off to a slow start, but at the end I was able to pull it together and come out 5-1,” Lawrence said. “The pools here are interesting because it’s a lot of people you’ve never fenced before. It can be good because you can build off not really knowing what they’re going to do and you can start off with a clean slate, but you’re also not able to go into the bout with any idea of what you’re going to do.”

Lawrence has two days off until she returns to fence in the table of 64.

“I’ll take tomorrow off and do a lesson on Wednesday, do some work so my point stays on. All the work is really done now, so there’s not much you can to improve in two days, but there’s lots of things that can negatively impact your performance, so I won’t be going out [laughs], I’ll make sure to keep my head together, that kind of thing,” Lawrence said.

Lawrence’s London Olympic teammate, Kelley Hurley (San Antonio, Texas) finished her pool rounds, 4-2, to earn a bye into the preliminary table of 64. Canadian Alexis Anna Rudkovska led their bout, 8-7, late in the second period, but Hurley fought back to take the win, 15-12, with her sister and 2012 Olympic teammate, Courtney Hurley (San Antonio, Texas) in the chair. Courtney, the younger of the two, is seeded 14th at this tournament and will compete on Thursday.

In her Senior World debut, two-time Junior World team medalist Kat Holmes (Washington, D.C.) pushed advancement down to the wire – first in pools and then in the preliminary tables. With four wins and one loss in the pools, Holmes and three-time Junior World medalist Eunsook Choi (KOR) went to overtime with the score tied at one. Holmes scored first to take the bout win, 2-1.

Holmes’s preliminary table of 64 bout came down to the final seconds as well when she scored three late touches against Jesica Jimenez Luna (PAN) to win the bout, 13-10.

Competition continues on Tuesday with the preliminary rounds for the men’s epee and foil and women’s saber events.