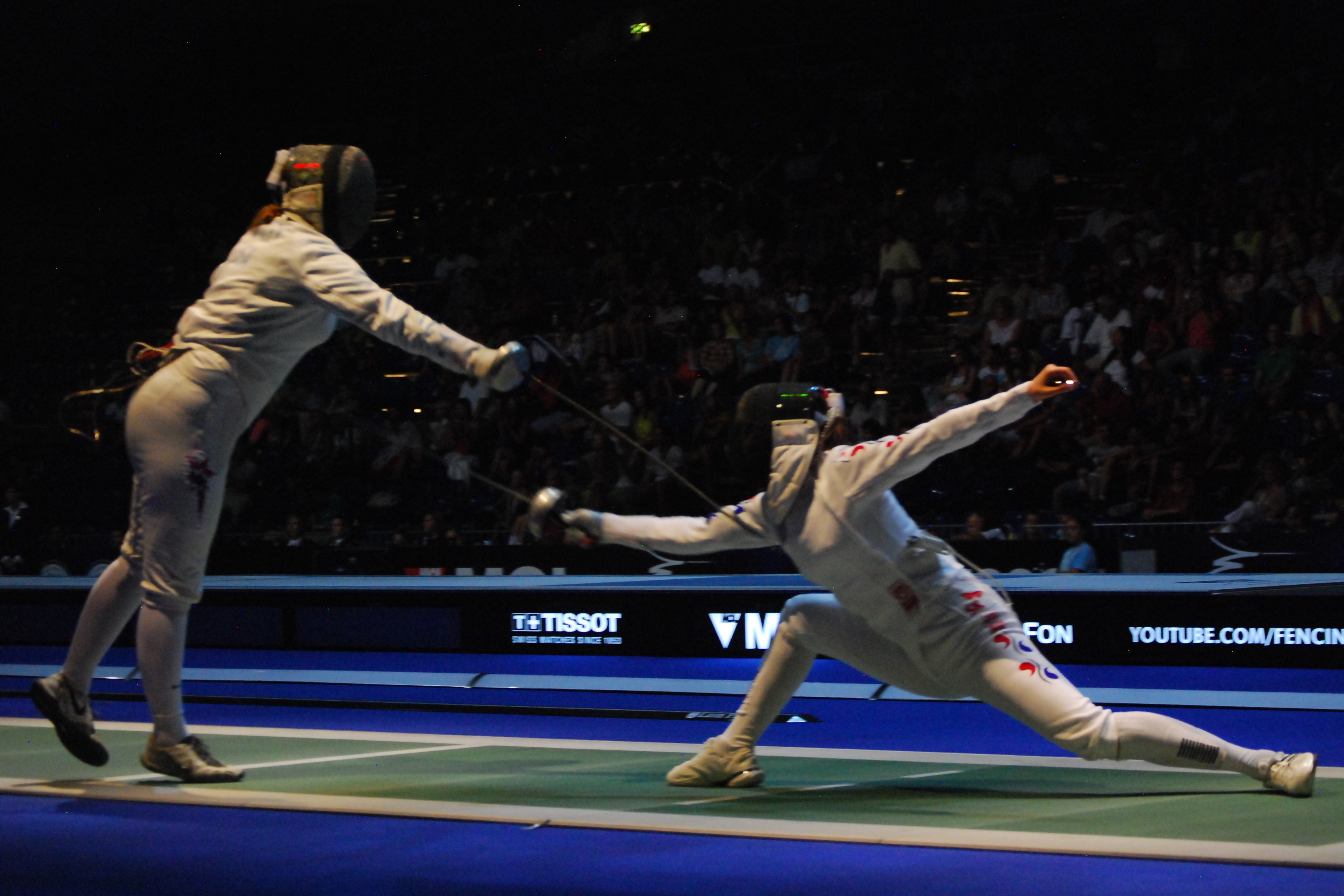 Courtney Hurley (left) scores a touch on A Lam Shin (KOR) in the table of 16. 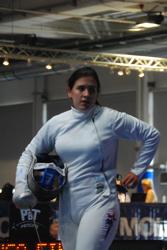 () – Nearly a year to the day after she won bronze in the women’s epee team competition at the London Olympic Games, Courtney Hurley () placed 11th in the individual event at the Senior World Championships.

At just 22-years-old, this is already Hurley’s sixth Senior Worlds appearance and her best individual result after advancing to the table of 32 in 2006, 2007 and 2011.

Exempt from pools due to her #14 seed in the tournament, Hurley began the competition with a table of 64 bout against Catherina Kock (FIN).

Kock, a three-time Senior World Team member, led the bout, 3-1, early in the first period, but Hurley came back to take a 6-3 lead by the break. In the second period, Hurley outscored Kock, 9-6, to win the bout.

In the table of 32, Hurley fenced 2008 Junior World silver medalist Simona Pop (ROU). Hurley dominated the bout from the start and held the lead for a 15-10 victory.

Hurley faced off with A Lam Shin (KOR), who placed fourth at the London Olympic Games, in the table of 16.

Hurley opened with a 3-1 lead after the first period after which Shin forced a passivity call to take the bout to the third period during which Shin scored three of the next four touches to tie the bout at four. Shin scored once more, but Hurley took another single for a tie at five with one minute left on the clock.

The two athletes fought for position, but it was Shin who scored twice in the final 30 seconds to take a 5-7 lead. Hurley scored once more as the clock ran down, but Shin won the bout, 7-6.

The victory was the second win for Shin over a team member on Wednesday.

The two battled and swapped touches for the first two periods. With the score tied at nine in the third, Holmes went on a streak of six singles to win the bout over her friend and teammate, 15-9.

Fencing Shin in the table of 32, Holmes dominated the beginning of the bout and outscored the Korean, 5-1, after an early passivity call sent the bout into the second period. In the third period, however, Shin came back and nearly finished the bout with a score of 10-9. Holmes made one final attack with three seconds on the clock to send the bout to overtime where Shin scored a single midway through the sudden death minute to end the bout while Holmes finished 29th overall.

Two-time Olympian Kelley Hurley () advanced to the table of 32 after a 15-12 victory over Avital Marinuk (ISR).

In her second bout of the day, Kelley and three-time World medalist Irina Embrich (EST) were tied at each touches each in the second period when Embrich scored three straight singles to take an 11-8 lead. After a double touch from both athletes, Embrich took a single late in the second period. Kelley followed with a single of her own, to pull within two of Embrich at 13-11. The Estonian scored once more and then the two fencers doubled out for Embrich to win the bout, 15-12.

Hurley finished the day in 30th place – her best Senior World results since placing 15th in 2010.

Competition continues on Friday with the men’s foil and women’s saber individual events.

Follow the results for all Senior World Championship events live at http://www.engarde-service.com/files/wch2013/wch2013/

Top eight and results are as follows, including athletes who were eliminated earlier this week: