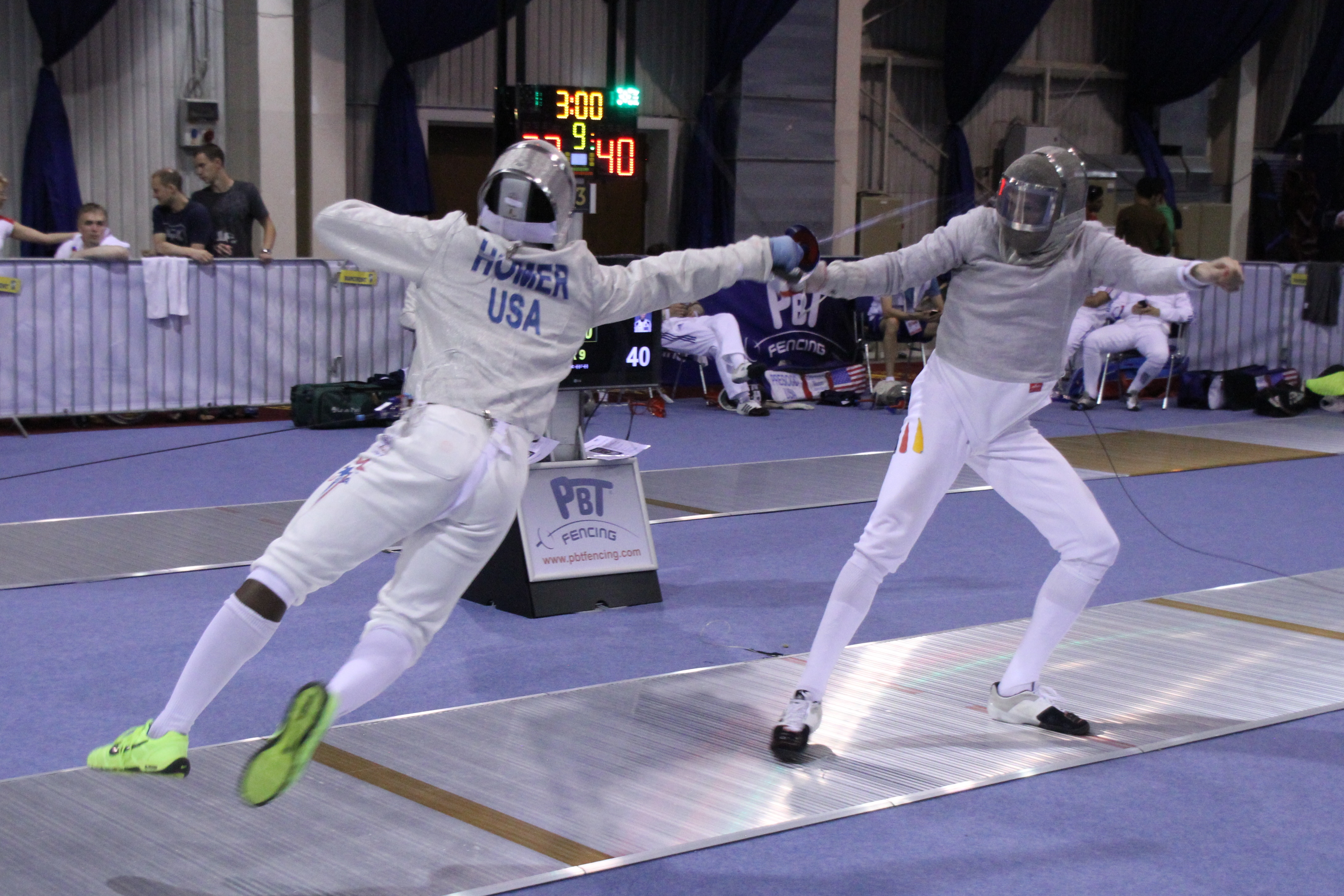 Daryl Homer goes for a touch against Hungary's Aron Szilagyi in the bout for eighth place.

(Budapest, Hungary) – With half of the 2012 U.S. Men’s Saber Team that fenced in London no longer competing internationally, a young squad arrived in Budapest as the seventh seed at the Senior World Championships determined to show the world that the team may be rebuilding, but would soon return to the podium.

In the table of 16, Team USA faced Ukraine – a team that the United States has historically struggled to beat.

“I think the U.S. record against Ukraine in winner’s bracket bouts is probably five and a gazillion. They’ve probably beaten us a gazillion times and we really want to get rid of that stigma that the last generation of fencers had about Ukraine. We really wanted to pull through and impose our fencing on them, but we knew it was going to be a tough match,” Homer said.

Homer, Dershwitz and Spear held the lead through the seventh bout, but the Ukrainians weren’t ready to be counted out and kept the match within two touches at 35-33.

Former Junior World Champion Dmytro Boyko brought Ukraine back, however, when he won the eighth bout against Spear, 8-4, to give the Ukranians a 40-38 lead.

Anchoring Team USA, Homer nearly shut out Yagodka with a 7-1 win to give Team USA a 45-41 victory.

“Eli did a great job in that match against Ukraine.  I was able to pull it off in the end, but he definitely helped keep it close in the meantime,” Homer said.

Fencing for a chance at fifth place, the Americans lost the next match, 45-34.

In their final bout of the day, Team USA met Hungary – a team led by 2012 Olympic Champion Aron Szilagyi who won bronze in the individual event on Wednesday.

Down by five touches going into the final bout, Homer took the strip as anchor against his rival Szilagyi.

Homer scored nine touches to the Hungarian’s four to tie the bout at 44, but Szilagyi took the last touch and the win for Hungary.

“Aron Szilagyi has eliminated me from quite a few championship tournaments in my fencing career. I think three or four to be exact. I know he’s the guy to beat right now. He’s a guy I’ve been researching a lot and looking at and building my game around for when I have to meet him in a competition. So it was my chance to try some of those tactics and I was pretty excited. Overall, we didn’t pull through at the end and, when our day comes again, I know we will take it,” Homer said.

Although the team came in with hopes of a top-six finish, Homer said they are looking ahead to next season.

“After our match with Hungary, I sat down with everyone and said that next year we will be better. Everyone knew we fell short of our goal. It is a team that’s in the process of rebuilding, but everyone wants to be better and everyone knows we can get there. Everyone kind of sees what the rest of the world is doing and we’re taking the steps we need to get where we need to be,” he said.

With the status of the men’s saber team event in question for Rio, Homer said he the U.S. team is focusing on improving their World results as a team and individually.

“Unfortunately, we’re probably not going to have a team event in Rio, so we’re just going to try and rack up as many team medals as we can between now and then and whoever makes it in individual makes it,” Homer said. “I’m just focusing on getting better myself. My best friend Miles [Chamley-Watson] won individual yesterday and it was very inspirational. He was the first one to break through and do it. I know last night I had goosebumps thinking that I could be the next one to do it and that it’s possible.”

Prescod, Kiefer and Ross built Ukraine for the first eight bouts, but a strategically low score of 32-31 meant Prescod would have a fast-paced anchor bout against Anastasiya Moskovska.

With 15 touches between the two fencers, the Ukrainian won the bout, 9-6, and Ukraine took a 40-38 victory over the fifth-seeded Americans.

In the match for 11th place, the trio of Kiefer, Ross and Lu combined to win or tie six of the first eight bouts against Japan.

Competition continues on Sunday with the men’s and women’s epee team events.

Team USA’s lineups are as follows: