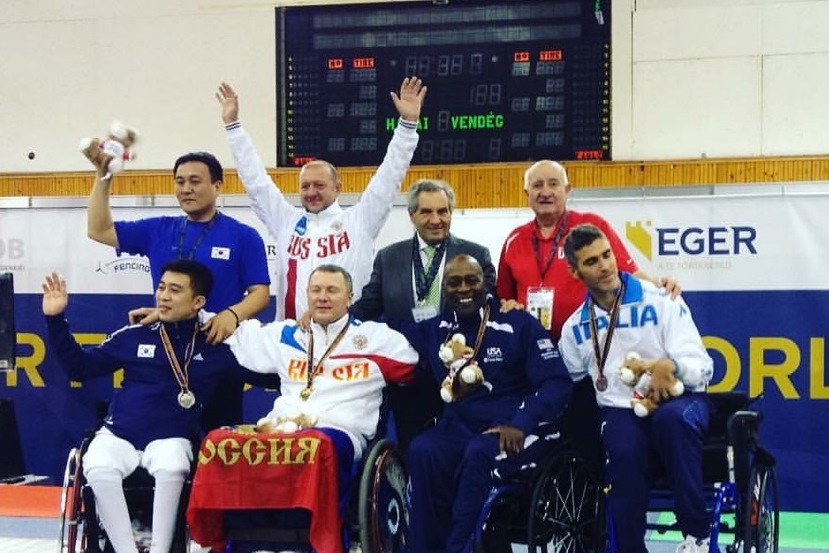 (Colorado Springs, Colo.) – At 58-years-old, five-time Paralympian Curtis Lovejoy (College Park, Ga.) remains at the top of his game and solidified his position as Team USA’s most decorated wheelchair fencer in history on Monday when he won his fourth career World Fencing Championship medal in Egers, Hungary – a bronze in the Category C foil event.

The two-time Wheelchair World Fencing Champion in 2006, Lovejoy returned to the podium in 2013 when he won silver in the Category C epee event. While Lovejoy missed the epee medal stand on Sunday when he placed ninth, he finished sixth out of the pools in the foil competition to advance directly to the quarter-finals where Lovejoy dominated Nikolay Lukyanov (RUS) for a 15-10 victory.

Lovejoy took on Alexander Logutenko (RUS) – the 2013 World Champion in both epee and foil who won epee gold on Sunday. The Russian won the bout, 15-7, and went on to take gold and successfully defend the Category C foil title as well.

While the Category C disability category is not contested in wheelchair fencing at the Paralympic Games, the Wheelchair Worlds served as one of the qualifying tournaments where athletes in the A and B categories can earn world ranking points with which to ultimately be selected to the 2016 Paralympic Team.

London Paralympian Joey Brinson (Florence, Miss.) placed 28th in his first event of the tournament – Category B epee. After a 1-4 result in pools, Brinson drew fifth seed Grzegorz Lewonowski (POL) in the table of 32, but lost his bout, 15-7.

Brinson fenced in the Category B saber event as well, but a 1-4 pool finish meant that he ended the round ranked 20th with the top 19 advancing to the direct elimination tables.

Brinson’s teammate, 16-year-old Alexander Xue (Plainsboro, N.J.), competed as a first-time Wheelchair World Team member in the Category A foil and saber events. Xue finished the foil pool rounds with a 1-5 record, but finished 33rd after missing the cut for the DEs. Xue was overpowered by more experienced competitors in the saber competition where he was unable to post a win in pools and finished 30th.

On the women’s side, 2013 Wheelchair World Team member Ellen Geddes (Johnston, S.C.) had a career best season in 2014 when she won her first bronze medal on the World Cup circuit in her Category B epee event and hoped to continue her upward rise in Egers. It was in the foil event where Geddes had her greatest success this week, placing 20th overall. After a 1-5 finish in pools, Geddes lost her table of 32 bout to Yui Chong Chan (HKG), 15-5. Geddes missed the cut in the epee competition, however, when her 1-5 pool result left her in 22nd place.

First-time team member Vikki Espinosa (Portland, Ore.) drew short pools with five competitors each in both her Category A epee and foil events. With fewer winning opportunities available, Espinosa was unable to take a bout and did not qualify for the DEs, finishing 22nd in epee and 25th in foil.