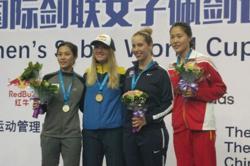 (Colorado Springs, Colo.) – Fencing against many of the rivals she will face at the Rio Olympic Games, two-time Olympic Champion Mariel Zagunis (Beaverton, Ore.) earned a bronze medal on Saturday at the Foshan Saber World Cup in China.

The win marks Zagunis’s third individual medal in a season that has included five World Cups.

Seeded second in the table of 64, Zagunis was exempt from the pool rounds and opened with a pair of strong wins against Ying Fu (CHN) and Norika Tamura (JPN) by 15-9 and 15-8 scores, respectively.

Zagunis’s sole loss of the day came in the semifinals to two-time individual Senior World Champion Olga Kharlan (UKR) who won the bout, 15-13, and went on to take gold.

Muhammad nearly had a showdown with Zagunis in the quarters, but lost her table of 16 bout to Marton, 15-12.

Monica Aksamit (Matawan, N.J.), who will represent Team USA as a replacement athlete in Rio, finished 6-0 in the pool rounds on Friday to take the 21st seed in the table of 64.

Aksamit defeated 2008 Olympic Team Champion Olga Zhovnir (UKR), in the 64 by a score of 15-8, but lost her next bout to six-time Senior World medalist Ekaterina Dyachenko (RUS), 15-13.

Dyachenko also fenced 2016 National Champion Kamali Thompson (Teaneck, N.J.) in the previous round, winning the bout, 15-4, over Thompson who went 3-3 in pools and defeated Heyddys Valentin (DOM), 15-9, in the preliminary table of 64.

Five-time Junior World medalist Sage Palmedo (Portland, Ore.) rebounded from a 2-4 pool result to qualify for the second day of competition with a 15-8 victory over Svetlana Kormiltsyna (RUS).

Palmedo drew 2012 Olympic Champion Jiyeon Kim (KOR) in the table of 64 on Saturday and lost the bout, 15-9, to Kim who later won the silver medal.

On Sunday, Zagunis, Muhammad, Aksamit and Palmedo fenced in the team competition.

The Americans dominated their first two matches, defeating the Dominican Republic, 45-14, in the table of 16 and Korea, 45-26, in the quarters.