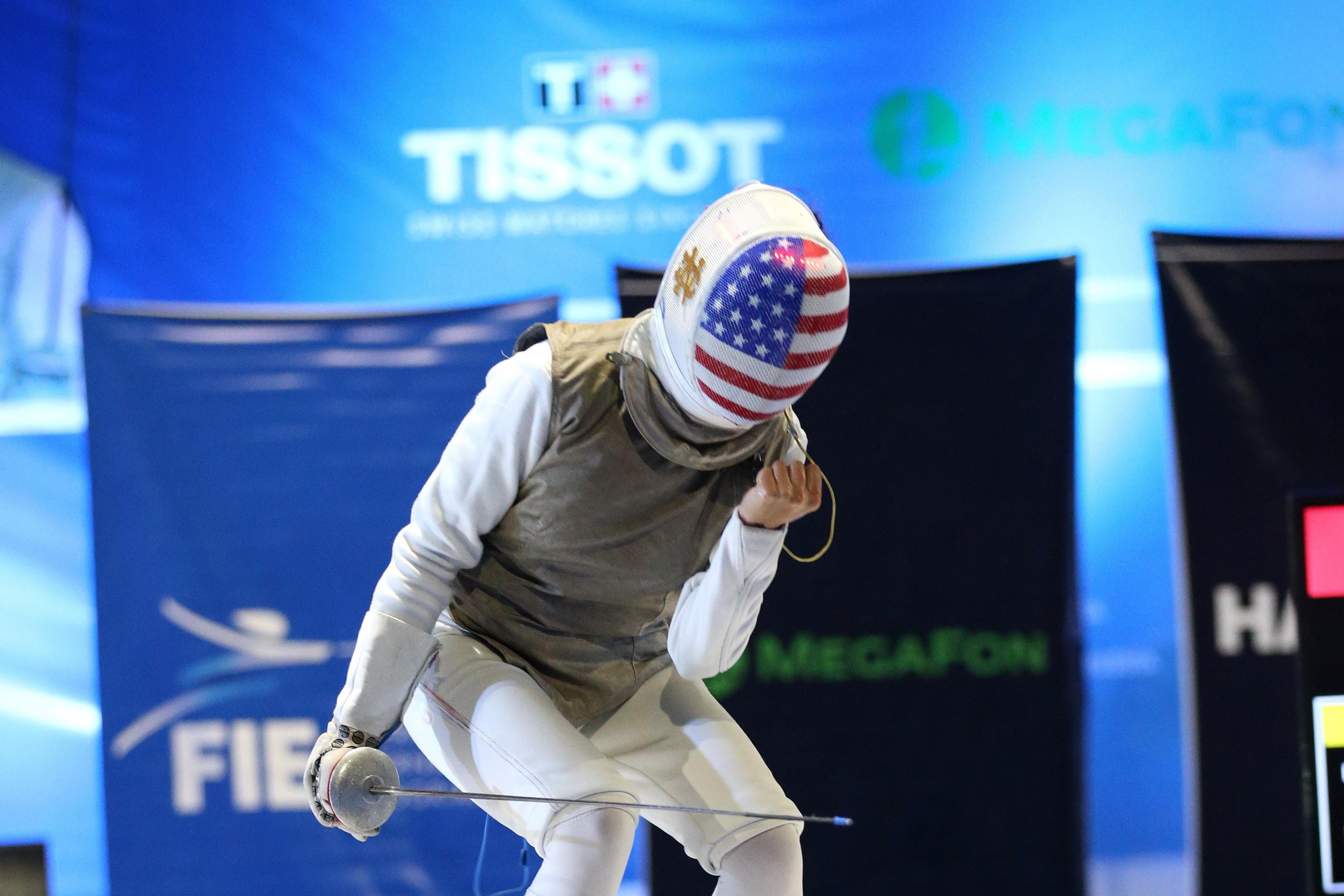 The Pan Ams begin on Tuesday and serve as the Zonal Championships for the Americas region and earned will be the final piece in the year-long puzzle that determines an athlete’s world ranking and, ultimately, seeding for the Olympic Games in Rio.

All 17 members of the 2016 U.S. Olympic Team will be on hand to take on nearly 300 athletes from 40+ nations. The U.S. team enters the event favored to win a bevy of medals after taking home 10 of the 12 gold medals (five individual and five team) when this event was held in Santiago, Chile in 2015.

Nine members of Team USA hold past individual Pan American titles, including the following members of the 2016 U.S. Olympic Team:

In addition, four members of the squad competing in Panama are past medalists at the Zonal Championships who won gold at the 2015 Pan American Games in Toronto, including Kiefer and Dershwitz who repeated their 2015 Zonal golds as well as women’s epee fencer Katharine Holmes (Washington, D.C.) and women’s saber fencer Dagmara Wozniak (Avenel, N.J.)

The following is a preview of the day-by-day action in Panama:

Tuesday, June 21: Men’s Individual Foil and Women’s Individual Epee
Men’s Individual Foil
Members of the U.S. Team have won this event every year since 2011 with Gerek Meinhardt (San Francisco, Calif.) and Race Imboden (Brooklyn, N.Y.) holding three titles each – the current Pan Am record for the weapon. Imboden, the reigning Pan American Champion, will be looking to crash the Rio seeding discussion. The former World No. 1 will be fencing the team event only in Rio, but is aiming to keep his now-top-five World Ranking high in preparation for the next World Cup season. Meinhardt, the first U.S. men’s foil fencer ever to reach No. 1 in the world, now sits at No. 3 and is looking to recapture the gold he won in 2013 and 2014 to bolster his seed in Rio. Alexander Massialas (San Francisco, Calif.) holds two Pan American Games individual titles and has been the runner up here four times (’11, ’12, ’14, 15), but has fallen short of the gold at this event after losses to his teammates. This year, however, Massialas comes in as the current World No. 1. Unlike everyone else in the field, Massialas’s top seed is locked for Rio and he will have the luxury of entering the tournament with less pressure on the heels of his most successful season to date. Miles Chamley-Watson (New York City, N.Y.) last reached the individual Pan Am podium in 2013 when he won bronze in his final tournament of the season before claiming the World Championship title. Chamley-Watson recently fell out of the top 16 in the world and a podium finish in Panama would bolster his seeding for Rio.

Women’s Individual Epee
Between the two of them, 2012 Olympic bronze medalists Courtney and Kelley Hurley (San Antonio, Texas) hold four of the last seven Pan Am titles with Courtney taking gold in 2009 and back-to-back titles in 2013 and 2014 and Kelley defeating her sister in the finals of the 2011 Championships. Kelley will enter this year’s event as the reigning Pan Am silver medalist while Courtney has the potential to pick up dozens of extra points to improve on an unexpected 10th place finish in 2015. Katharine Holmes (Washington, D.C.) has been among Team USA’s most consistent athletes at this event, winning medals every year since her Pan Am debut in 2013 while Katarzyna Trzopek (Pacifica, Calif.) will be a new face for many at the event. The Polish-born Trzopek did not qualify for the 2015 Pan Ams, but made her U.S. team debut at the World Championships last year before going on to earn the fourth position on the 2016 Olympic Team.

Wednesday, June 22: Women’s Individual Saber and Men’s Individual Epee
Women’s Individual Saber
Mariel Zagunis (Beaverton, Ore.) has dominated this event since winning her second Olympic title in 2008. The two-time Olympic Champion won her first Pan Am gold in 2009 and has dropped just one direct elimination bout since, winning five more titles in 2010, 2011, 2012, 2013 and 2015. This year, Zagunis is ranked No. 2 in the world coming into this event and the fencing community also will be watching this week’s European Championships where 2014 World Champion Olga Kharlan (UKR) will be fighting for the chance at passing Zagunis in the world rankings. Dagmara Wozniak (Avenel, N.J.) will be one of Zagunis’s top opponents in Panama. Wozniak handed her friend and London teammate a defeat last year en route to winning the Pan American Games. The two fenced each other in the finals of the Pan Am Championships in both 2012 and 2015 with Zagunis winning by a 15-8 score last year and 15-13 in 2012. Injuries kept Wozniak off the circuit for three tournaments this year, but she has the potential to have success in Panama in order to stave off a potential top-16 matchup against Zagunis in Rio. Ibtihaj Muhammad (Maplewood, N.J.) holds three Pan Am bronze medals and earned a career-high No. 7 world ranking last season. Muhammad is now ranked No. 10 in the world, but fewer than a dozen points separate No. 9 from No. 14. With 48 points on the line for a gold, Muhammad could make a critical move in the seeding in Rio if she improves on her fifth place finish at the 2015 Pan Ams. As the team fourth for Rio, Monica Aksamit (Matawan, N.J.) won’t be in the mix for individual seeding, but the first-time Olympian will be competing in her second Pan Ams after winning bronze in 2009 and has finished in the top 32 or 16 of every World Cup or Grand Prix since January.

Thursday, June 23: Women’s Individual Foil and Men’s Individual Saber
Women’s Individual Foil
The U.S. squad has dominated this event since the first Pan Am Championships was held in 2006. Lee Kiefer (Lexington, Ky.) set the record for the most consecutive Pan Am titles won by any fencer in history last year when she took home No. 6 at just 21-years-old. Now ranked No. 3 in the world on the lead-up to Rio, Kiefer is looking for No. 7 in Panama. Her teammates are likely to be Kiefer’s greatest competition as Kiefer fenced 2012 Olympian Nicole Ross (New York City, N.Y.) in the 2015 finals and Kiefer’s London and Rio teammate, Nzingha Prescod (Brooklyn, N.Y.), was the last U.S. woman besides Kiefer to win gold at the Pan Ams. Sabrina Massialas (San Francisco, Calif.) placed in the top eight at her first Pan Ams last year and is expected to be a medal contender in Panama City.

Men’s Individual Saber
Twenty-year-old Eli Dershwitz (Sherborn, Mass.) won titles at both the 2014 and 2015 Pan American Championships as well as the 2015 Pan Am Games. Many are expecting another showdown between Dershwitz and 2015 Senior World medalist Daryl Homer (Bronx, N.Y.) who won silver in 2015 and gold in 2011. Homer and Dershwitz are ranked ninth and 10th in the world, respectively, as Homer returns for his second Games and Dershwitz makes his debut in Rio. London Olympian Jeff Spear (Wynantskill, N.Y.) earned a career-best silver medal finish in 2012 and took bronze here last year. While two-time Junior World team medalist Andrew Mackiewicz (Westwood, Mass.) has never fenced in an individual event at the Senior Pan Ams, he did win gold as a member of the team competition in 2014.

Friday, June 24: Men’s Team Foil and Women’s Team Epee
Men’s Team Foil
The U.S. Men’s Foil Team has won the last eight gold medals at this event with its last loss coming to Canada in 2007. With three of the top five fencers in the world representing Team USA, Massialas, Meinhardt and Imboden will be joined by former Junior World Team Champion David Willette (Lafayette, Calif.) who last fenced with the team when the Americans won bronze at the San Jose World Cup in October.

Women’s Team Epee
The Hurleys and Holmes have been on three straight gold medal-winning teams together at the Pan Ams, continuing a five-year undefeated run at this event. Trzopek will be a new addition to the Pan Am Team lineup, but played a key role in Team USA’s back-to-back bronze medal finishes on the World Cup circuit in the fall.

Saturday, June 25: Women’s Team Saber and Men’s Team Epee
Women’s Team Saber
With Wozniak injured for three World Cups this season and Aksamit moving into the fourth position on the team in February, this will be the first time the four members of the 2016 U.S. Olympic Team have fenced together this year. The Americans could face challenges from several teams, but have never lost a match at the Pan Am Championships.

Men’s Team Epee
The rivalry between the United States and Venezuela in this event has grown into one of the much-watch annual matches at the Pan Ams. While the Americans won gold last year, the Venezuelan team features 2012 Olympic Champion Ruben Limardo and last year’s final came down to a single touch in overtime.

Sunday, June 26: Women’s Team Foil and Men’s Team Saber
Women’s Team Foil
Team USA has remained undefeated over the last 10 years in this event and this season has been one of the squad’s best with a pair of World Cup medals and a string of top eight finishes to highlight the season.

Men’s Team Saber
Not only have the U.S. men won this event every year since 2006, but they did it the last two years without Homer or Dershwitz on the strip. Both members of the 2016 U.S. Olympic Team will be in action this year and are looking to cap off the season with a fifth international medal and third gold.

The complete roster of athletes competing at the Pan American Championships is as follows: