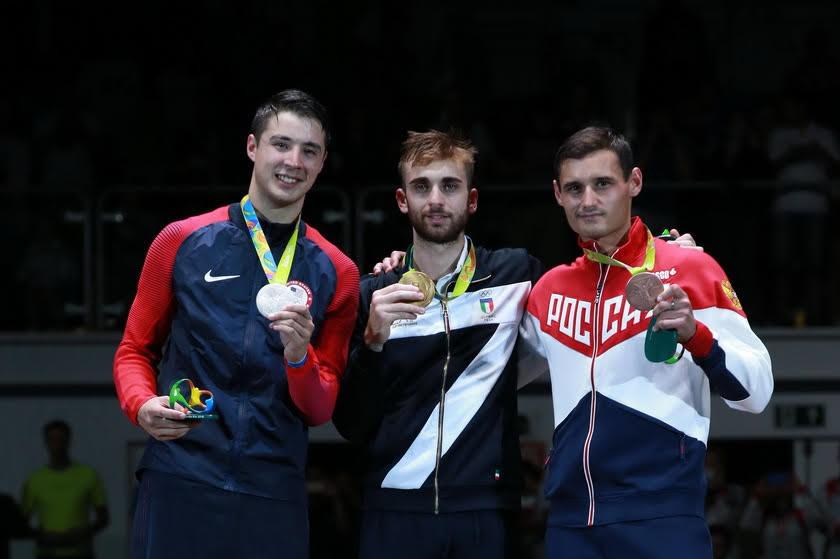 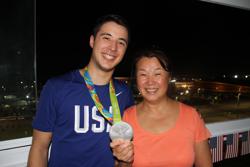 (Rio de Janeiro) – It had been 84 years since the United States saw an individual men’s fencer compete in an Olympic gold medal final.

That all ended on Sunday when 22-year-old Alexander Massialas (San Francisco, Calif.) won four bouts at the Olympic Games to win a silver medal in men’s foil.

Massialas became the first U.S. man since 1932 to win an individual silver medal (and just the fourth ever to do so) when he finished second as one of the youngest athletes in the field.

In the quarter-finals, Massialas made one of the greatest comebacks at the Games. Although he was down by six touches and 2012 Olympic Team Champion Giorgio Avola (ITA) needed just one to win, Massialas scored seven straight to steal the bout back, 15-14, to keep himself in contention for a position on the podium.

“This is the biggest stage where it’s my time to shine. So I just believed every step of the way, every second, every touch that I could actually do it, one by one. Just believe in yourself and never give up. I just fought my hardest and I left it all out on the strip,” Massialas said of his hard-fought victory.

In the semis, Massialas face Richard Kruse (GBR) – a familiar opponent who upset three-time Senior World medalist Gerek Meinhardt (San Francisco, Calif.), 15-13, in a quarter-final heartbreaker that left the Americans from what many hoped would be a two-medal day in fencing.

With the score tied at four, Massialas scored four straight to finish the first period with an 8-4 lead and closed the bout at 15-9 in the second.

While Garozzo came out aggressively, Massialas clawed his way back into the match to tie the score at eight. The call would be reversed, however, putting Garozzo up by two at 9-7.

Garozzo kept the momentum in his favor, scoring five straight before Massialas could respond with a touch of his own with 0.94 seconds on the clock in the first period.

“Even being down, 14-7, I always think I have a chance to win the bout. I did it in the quarters and I’ve done it before. This is the Olympic Games and I wasn’t going to go down without a fight,” Massialas said.

The American fans in a loud, pro-Garozzo arena waited anxiously for another comeback and it seemed probably as Massialas scored the ninth, 10th and 11th touches, but Garozzo was prepared and scored the last touch he needed to win the bout, 15-11.

“I just left my heart out on the strip and I scored four in a row at the very end, but he was able to get that last touch,” Massialas said. “He’s one of the hardest fighters out there. Kudos to him. It was a great bout. He’s always been an amazing fighter since we were cadets and juniors and now in the seniors too. He wanted it and he left his heart on the strip and I did to, but, unfortunately, I just came up a little short today.”

Massialas’s win ends a 32-year medal drought in men’s individual fencing for the United States as he becomes the first U.S. man to win an individual medal at the Games since Peter Westbrook (New York City, N.Y.) won bronze in 1984.

“I couldn’t be prouder to bring back any medal for the United States. I stood up there, tried to keep my head held high and I couldn’t be a prouder son, couldn’t be a prouder brother, prouder teammate to bring this medal back to the United States and US Fencing,” Massialas said. “Everyone who’s been there along the way. My dad who got me into fencing and has been my coach the whole time. Dean Hinton who has been one of my coaches ever since I was a little kid. Everyone at the fencing club. It really takes a village.”

While much of the media attention surrounded Massialas is often focused on his relationship with his father and coach, three-time Olympian Greg Massialas (San Francisco, Calif.), it was talking about the support he receives from his mother, Vivian, that brought him to tears.

“There were times when I had to fight back tears receiving the silver medal and I see my mom out in the stands trying to hug me from so far away. My mom has been the silent force behind me in everything I do. She hates being in the limelight, but this is the one chance I have to thank her for everything she’s done for me,” Alexander Massialas said. “Driving me to fencing practice every single day, encouraging me every step of the way. When things got tough, just giving me unconditional love over the 22 years I’ve been alive. She’s the secret hero that nobody really talks about and I couldn’t be a prouder son to bring this back to her.”

After the loss in the finals, as the crowd celebrated the Italian, Greg came over to his son and told him “It’s ok” and that he was proud of his historical accomplishment – both as a father and as a coach.

“It’s overwhelming. Hearing my dad out there saying that he couldn’t be prouder of me. It means a lot,” Alexander said.

Massialas will return to the strip on Friday for the team competition where the United States is seeded second behind Italy. Massialas will fence with Meinhardt, Chamley-Watson and 2015 Overall World Cup Champion Race Imboden (Brooklyn, N.Y.)

“If we could bring back the gold, it would mean redemption … To do it with a team where I’ve been together for five years with some of them and seven, eight years with some of the other ones, it would be an amazing feeling,” said Alexander Massialas who is seeking a gold not only for himself, but for Meinhardt in his third Olympic appearance. “This will probably be Gerek’s last Olympics … he’s a fencer I always looked up to. He was the top dog at our club for so long and he was the guy who inspired me in 2008 in Beijing when I went to go watch him. Through all of the butt-kickings he gave me over the years, I was finally able to put myself in a position where we were both equals. And to finally win a gold medal in the team event at his last Olympics … I’d be the proudest teammate ever.”

In the earlier rounds, Meinhardt advanced to the top eight for the first time in his career at three Olympic Games.

Meinhardt and Massialas's qualification for the eight marked the first time a U.S. man advanced to a men's foil individual quarter-final at the Games since Albie Axelrod won bronze in 1960.

Meinhardt opened the event with a strong first bout, scoring six straight touches against Maximilien Van Haaster (CAN) in less than 25 seconds and taking the table of 32 bout, 15-13.

While Kruse led their quarter-final bout, 9-5, at the break, Meinhardt came back in the second period to Kruse's lead to one at 14-13. He fell short of the win, however, when Kruse took the 15th touch.

"I got behind early. Richard was fencing great. He’s a really smart fencer and he got me to get stuck on my feet several times and took advantage of my mistakes and had some nice touches," Massialas said. "I almost got back into it at the end, but would have had a much better chance if I didn’t fall so far behind."