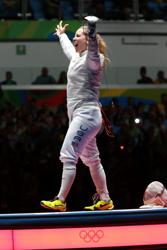 (Colorado Springs, Colo.) – Members of the fencing community will have the opportunity to celebrate Team USA’s historic four-medal win at the Rio Olympic Games when the USA Fencing Celebrates Rio tour comes to the Oregon Fencing Alliance in Portland, Oregon on Tuesday, Oct. 4 from 5 – 6:30 p.m.

Fans are invited to OFA to honor Portland's own Mariel Zagunis who won her fourth career Olympic medal with Coach Ed Korfanty in Rio. Zagunis anchored the U.S. Women's Saber Team to a bronze medal finish in Rio and became the first U.S. fencer in history to win medals at three separate Olympic Games.

Zagunis and Korfanty will be joined by 2004 Olympian and 2012 World Team Champion Cody Mattern in sharing their stories and Olympic experiences with the community that has supported them in reaching the highest levels of the sport.