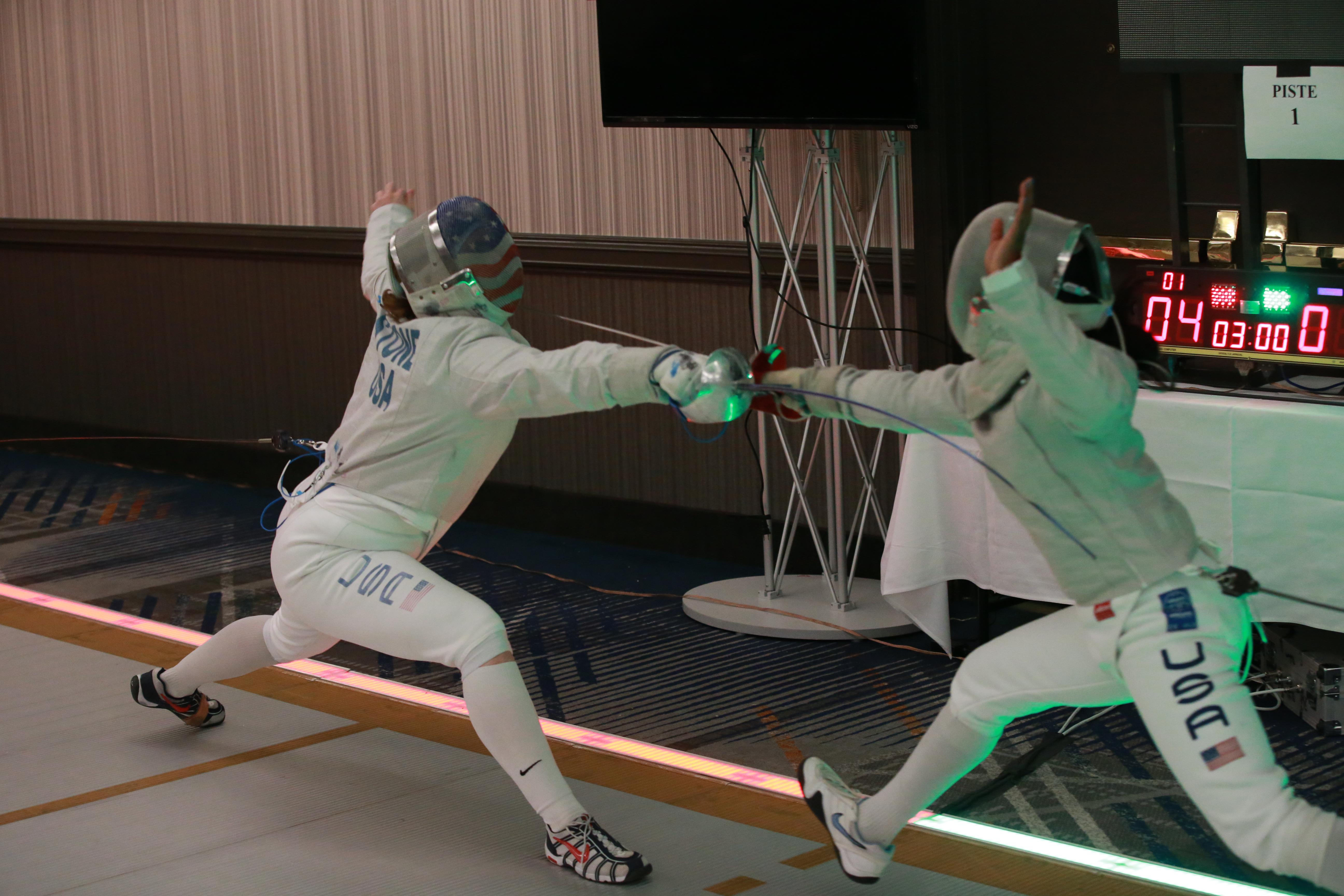 (Brooklyn, N.Y.) – Eight U.S. fencers remain in contention for the podium at the New York Women’s Sabre World Cup as the field of 141 athletes was cut to 64 on Friday.

Three-time Senior World medalist Eliza Stone (Chicago, Ill.) led the way for the Americans during the preliminary rounds as the only U.S. athlete to finish the pools undefeated with a 6-0 record.

The result earned Stone the 18th seed in the table of 64 which will be held on Saturday at the New York Marriott at Brooklyn Bridge.

“I stayed focused, stuck with the plan and maintained that focus the entire time, so I’m happy with that,” said Stone who remained in Princeton to train after graduating from the university in 2013. “It’s always either great because it’s your territory or ‘Oh no! Everyone’s watching me.’ But I just stayed very very very focused and didn’t think anything else and tried to pretend like it’s just a regular tournament.”

Stone climbed the ranks in 2013 as a newcomer to the international circuit and won two medals within her first year. The former No. 3 fencer in the nation fell short of qualifying for Rio, but made the decision to continue with the sport while taking classes to prepare for her eventual goal of attending med school.

“I had to take a break to refind my center with fencing and try to be happy with the sport. It got to be a little too much in too many ways during the Olympic year,” Stone said. “I switched coaches because my old coach retired. Things are new. I’m enjoying fencing again and I’m just going to have fun with the sport and see where it takes me. I’m way more relaxed about it.”

Stone will fence Clara Laurent in the table of 64 on Saturday. Laurent is one of nine French fencers who will be in the mix during the second day of competition. London Olympic Champion Jiyeon Kim (KOR) also lies in Stone’s bracket for a potential table of 16 matchup as the tournament’s No. 2 seed.

Rio Olympic team bronze medalist Dagmara Wozniak (Avenel, N.J.) also advanced directly out of pools to the table of 64, posting a 5-1 record to come away with the 32nd seed in the DEs. A seven-time individual World Cup medalist, Wozniak will fence 2015 Junior World Team Champion Chiara Mormile (ITA) in the table of 64 for a chance to fence reigning Olympic Champion Yana Egorian (RUS) in the table of 32.

Wozniak’s Rio teammate, Ibtihaj Muhammad (Maplewood, N.J.), was the only U.S. fencer to be exempt from pools as one of the top 16 fencers in the world. Seeded No. 5 in the table of 64, Muhammad will fence Martina Criscio (ITA) in the first round on Saturday. Manon Brunet (FRA), the 20-year-old standout who placed fourth in Rio, also lies in Muhammad’s quadrant for a potential quarter-final matchup.

Five members of Team USA qualified for the 64 through the preliminary direct elimination rounds.

Monica Aksamit (Matawan, N.J.), the fourth member of the team that won bronze in Rio, drew a short pool and a 4-1 finish meant she would need a DE win to make the second day. Aksamit fenced Rio Olympic team silver medalist Olena Voronina (UKR) in the preliminary table of 64 and won the bout, 15-11. Aksamit will fence 2015 Junior World team bronze medalist Petra Zahonyi (HUN) in the 64 on Saturday.

A former World University Games Team member, Kamali Thompson (Teaneck, N.J.) has the potential to move from sixth to fourth in the National Team Point Standings with a win in the 64 over Margaux Gimalac (FRA). Thompson qualified for the table of 64 with a 4-2 result in the pools and a 15-8 win against Tori Johnson (Peachtree City, Ga.)

A cadet at the Air Force Academy fencing at her second Senior World Cup, Leanne Singleton-Comfort (Marysville, Calif.) also lies in Thompson’s quadrant. The 20-year-old finished 2-3 in the pools and defeated Lucia Martin-Portugues (ESP), 15-13, in the preliminary table of 64. Singleton-Comfort earned a comeback win against Margaux Rifkiss (FRA) in her final bout of the day on Friday and will take on 2015 Senior World medalist Cecilia Berder (FRA) in the 64 on Saturday.

One of the youngest fencers in the field, 15-year-old Ryan Jenkins (Cupertino, Calif.), qualified for the table of 64 after making her Senior World Cup debut in Orleans in November. Despite a 2-4 result in pools, Jenkins defeated Yu Jin Choi (KOR), 15-10, in the prelim table of 128 and Pamela Brind’Amour (CAN), 15-13, in the prelim table of 64. Jenkins drew the 64th seed for Saturday and will take on two-time Olympic Champion Yana Egorian (RUS) in the 64.

Competition begins on Saturday with the table of 64 at 10 a.m. Eastern. Semis and finals will begin at 6 p.m. Eastern.

All bouts will be broadcast live at www.youtube.com/usafencing.

Visit http://www.usfencing.org/2017nywomensabre for live results from the tournament.

Results for U.S. fencers who did not advance to the table of 64 are as follows: