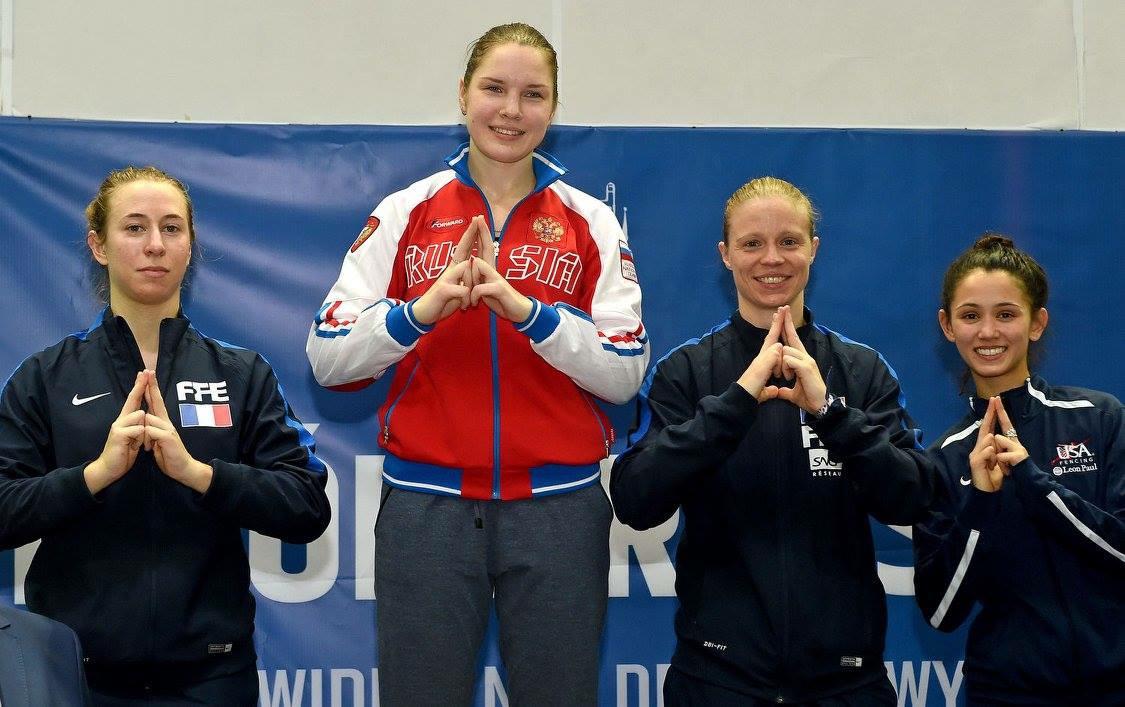 (Colorado Springs, Colo.) – Two-time Olympian Lee Kiefer (Lexington, Ky.) returned to the podium for the second time this season on Saturday, following her gold medal at the Torino Grand Prix in December with a bronze at the Gdansk World Cup in Poland.

The No. 2 ranked fencer in the world, Kiefer was exempt from pools and opened her table of 64 bout against Charlotte Krause (GER) with eight unanswered touches before taking the bout, 15-4.

In the table of 32, Kiefer built an 8-3 lead after the first period against Edina Knapek (HUN) who came back to tie the bout at 10 in the second. While Knapek was poised for the upset in the third period, Kiefer finished with a 15-12 win.

Kiefer faced a familiar opponent in the table of 16 – two-time Pan American medalist Saskia Loretta Van Erven Garcia (COL) who defeated 2016 Cancun World Cup silver medalist Elisa Vardaro (ITA) in the previous round. After a 10-6 first quarter, Kiefer went 5-1 in the second to win the bout, 15-7, and improved her record against the Colombian to 8-0.

Kiefer fenced Adelina Zagidullina (RUS) in the quarters and ended the first break with a 6-2 run for a 9-5 lead. Although Zagidullina won their previous two bouts in 2015, Kiefer stayed ahead in the second period to win the bout, 15-10.

In the semifinals, 2014 Junior World medalist Svetlana Tripapina (RUS) entered the bout coming off a pivotal win over 2014 Senior World medalist Martina Batini (ITA) and rode the momentum through the first period with an 8-5 lead. Kiefer made key adjustments at the break and scored four straight to open the second period and regain the lead at 9-8. Tripapina didn’t give up, however, and reclaimed control of the bout for a 15-13 win.

Ross, who won medals at the last three international events, was challenged in the table of 64 by Maeva Rancurel (FRA) who pushed Ross to a tie at 14 in the final seconds of the second period before Ross closed out with a single light hit seven seconds into the third.

In the table of 32, Ross took a comfortable win over Eva Hampel (GER) at 15-12 to advance to the table of 16 where she would fence Tripapini.

Ross fenced a close bout, tying the Russian at 12 in the third period, but Tripapini picked up three straight to end the bout at 15-12.

Reigning Junior World Champion Sabrina Massialas (San Francisco, Calif.) finished the pool rounds at 6-0 on Friday to advance to the table of 64 on Saturday.

Massialas took on five-time Senior World team medalist Astrid Guyart (FRA) in the table of 32, but lost by a 15-8 score.

Dubrovich defeated two-time Junior World team medalist Morgan Partridge (Swansea, Mass.), 15-5, in the preliminary table of 128, but lost to eventual bronze medalist Pauline Ranvier (FRA), 15-11, in the next round.

Weintraub finished the pools at 5-1 to earn a bye into the preliminary table of 64, but lost to Alice Recher (FRA), 15-8. Despite the loss, Weintraub earned her first point on the FIE senior world rankings, making her the second youngest women’s fencer to hold a current world ranking in any weapon.

Kiefer, Ross, Lu and Massialas fenced in the team event on Sunday, looking to add a third medal to the squad’s record for the season after winning silver in Cancun and bronze in St. Maur.

The Americans got off to a strong start in the table of 16 with Massialas posting a +11 indicator over three bouts and Ross going +10 in two. Kiefer closed the match as anchor and Team USA ended with a 45-20 win.

Team USA won or tied six of its first eight bouts against Hungary in the quarters with Kiefer anchoring the squad to a 45-39 victory.

While Team USA kept the semis close, Italy led for most of the match. Ross came in as anchor against Batini and won the bout, 6-5, but couldn’t close the gap and Italy advanced to the finals, 45-43.

With Russia up, 40-30, Massialas took on reigning Olympic Champion Inna Deriglazova in the anchor leg. Twenty-year-old Massialas scored five straight to start the bout and picked up seven touches total before Deriglazova finished with a 45-37 win for Russia.