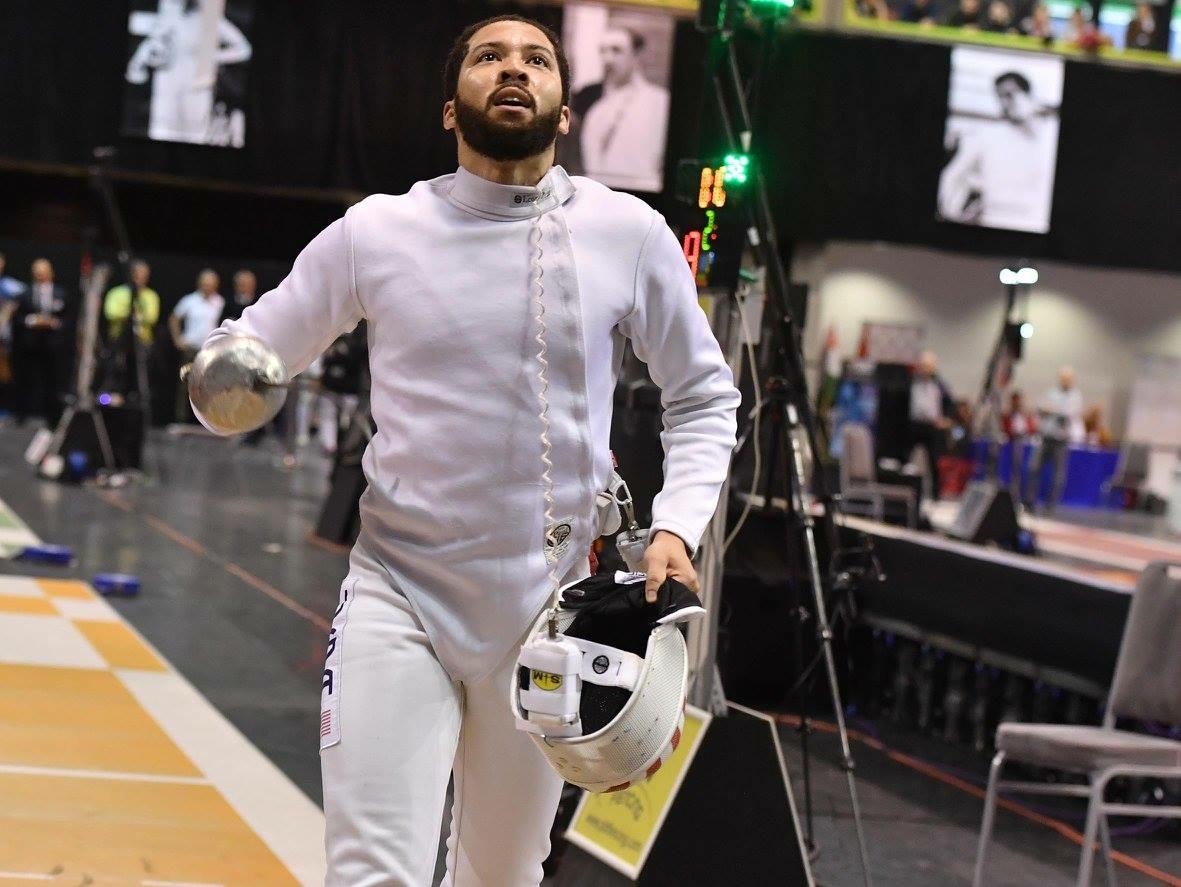 During the 2015-16 season, Bratton fell one position short of qualifying for the U.S. Olympic Team, but welcomed a new addition to his life – his now one-year-old son Josiah with wife Brennan Bratton.

After fencing in just two domestic tournaments this season, Bratton entered the Budapest event ranked 39th in the nation. The former top-ranked men’s epee fencer in the United States would need one of his best results ever to move into contention to qualify for a potential seventh Senior World Championships appearance.

On Friday, Bratton came away from the pool rounds with six straight wins and a +14 indicator to advance directly to the table of 64 as the 20th seed.

Following a day off for the women’s preliminary rounds, Bratton won his table of 64 bout against 2013 Senior World team medalist Alexandre Blaszyck (FRA), 15-14.

In the table of 32, Bratton fenced Pavel Pitra (CZE). Although Pitra scored four straight to open the bout, Bratton moved within two touches in the second period at 7-5 when passivity was called. With 42 seconds remaining in the bout, Bratton tied the score at nine. Pitra scored another single, but Bratton answered with a score of his own, tying the bout at 10 with 11 seconds on the clock and taking an 11-10 lead when Pitra was given a red card. The athletes had scored three more doubles when Pitra took a second red card with less than two seconds remaining in the bout. Bratton, who was within a touch of the win at 14-13, received the final score for a 15-13 victory.

After defeating five-time World Cup medalist Jiri Beran (CZE), 5-4, in the pools, Bratton drew Beran again in the table of 16. While Bratton held a 7-3 lead at the break, Beran came back to tie the bout at 13 late in the second period. Bratton scored two singles in the final 30 seconds to take a 15-13 win and advance to the quarter-finals of a Grand Prix for the first time in his career.

Bratton kept pace with Andrea Santarelli (ITA) for the first period of the quarters, holding the Italian to a one touch lead at the break. In the second period, however, Santarelli ran away with the bout, scoring the six touches he needed to take the win, 15-9.

The result allowed Bratton to move up from No. 39 in the National Team Point Standings to sixth with just one tournament remaining before the top four athletes in the nation are named to the 2017 Senior World Team following the USA Fencing Division I National Championships in Baltimore from April 21-24.

Two-time Division I National Champion Alex Tsinis (Little Neck, N.Y.) earned a top-64 result for the second time this season, qualifying for the second day after finishing 5-1 in pools.

Tsinis drew 2012 Olympic bronze medalist Jinsun Jung (KOR) in the table of 64 and finished 46th after a 15-12 loss to the Korean who went on to win gold in Budapest.

Tsinis earned enough ranking points to move from fifth to fourth in the National Team Standings, making himself one of Bratton’s greatest challengers for a World Team position.

James Kaull (New York City, N.Y.), a 2011 Junior World Team member who won gold at the January North American Cup, is in fifth, but did not qualify for the second day in Budapest.

The elder Hurley came up against Federica Santandrea (ITA) in the table of 64 and held a 4-3 lead after the first period that grew to 10-8 after the second. The Italian tied the bout at 12 in the third which Hurley answered with a pair of singles before doubling out to 15-13 with 18 seconds remaining in the bout.

In the table of 32, Hurley fenced Melissa Goram (FRA), a bronze medalist at the Barcelona World Cup in January. Goram led the bout by three touches at 8-5 in the second period before reeling off five straight singles to build her lead to 13-5. Hurley pushed the bout to the end of the second period, but a double at the start of the third gave Goram a 15-9 win.

Ranked fourth in the National Team Point Standings at the start of the event, Hurley moved up to No. 3, passing two-time Senior World Team member Anna van Brummen (Houston, Texas) who remained in the United States this weekend where the Princeton senior won the NCAA Championships.

Hurley fenced 2015 Senior World team bronze medalist Olena Kryvytska (UKR) in the 64 with the fencers taking a passivity call to send the bout to the second period where Kryvytska led the bout, 8-5. Hurley came within a touch of tying the bout at 12-11 before Kryvytska scored three singles to take the bout, 15-11.