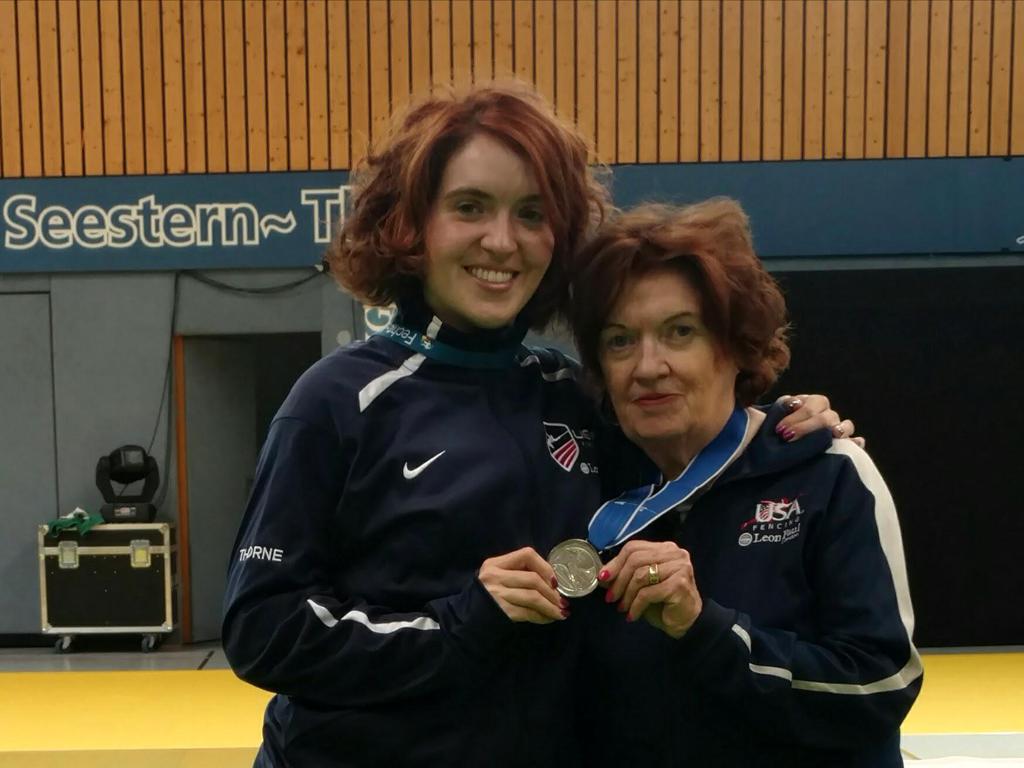 Thanks to fencing, the mother-daughter relationship of Diane and Kathleen Reckling is stronger than ever.

Diane began fencing foil at Fencers Club in the early 1970’s. Despite being in her late 20s, she quickly found she loved the sport and began competing, but later retired due to career responsibilities. In 1985, daughter Kathleen was born and as she grew up, their relationship was more distant.

“I had a fairly high-level job. I was travelling a lot, I wasn’t home,” Diane said. “I made a decision to stop work early. I took early retirement, mainly so I could spend time with Kathleen. At first it was pretty awkward to get her to talk to me and I can’t even begin to tell you how close we are now and I think we owe it all to fencing together.”

When Kathleen entered high school in 1999, Diane returned to the sport to coach at Ardsley High School. Kathleen hadn’t fenced prior to high school, but, like her mother, immediately fell in love with the sport and their relationship began to blossom.

“In many ways I think my mother isn’t the stereotypical fencing mom in that she didn’t put me in the sport when I was eight,” Kathleen said. “I got to try a lot of other things. I did dance, I was on the softball team, I was on the swimming team at my school, but I was lucky in that Ardsley High School had a (fencing) team, so I started when I was 14 and really took to it. I loved it … her experience starting as an adult and getting to a high level gave the background that I needed to get into the sport because once I decided I liked it, I qualified for Nationals after fencing high school for six months.”

Kathleen began competing on the international circuit while in high school and earned a spot on the fencing team at Columbia, where she was an All-Ivy fencer, earned academic All-Ivy honors and was an Honorable Mention All-American in 2005-06.

At the same time Kathleen started college, Diane resumed competing again, participating in the veteran category after a friend she used to train with at Fencer’s Club convinced her to come back.

“We went to all the NACs together. She never missed a college event and then she was competing herself,” Kathleen said. “She was such a mainstay in the fencing sphere that when George Kolombatovich, the coach for Columbia, put out the travel roster for one of our college meets, he listed her name instead of mine.”

Diane is now a seven-time Veteran World Team member, claiming the silver medal in the team foil event in 2016.

Meanwhile, Kathleen competed in her final international event in 2010 and stopped competing consistently in early 2011, creating a role reversal; Diane became the fencer and Kathleen served the duties at the fencing parent.

“My job was to make sure she got to practice, warm her up at practice, make sure that all of her weapons passed, make sure the bag was packed before we left and that we didn’t leave her shoes at home, make sure she had enough water at competitions,” Kathleen said. “I’ve had so much fencing parent practice. I’ve got this down.”

That is until about a year and a half ago when Kathleen couldn’t stay away from the sport any longer. However, rather than fencing foil, the weapon she’d fenced for many years, she decided to try something new and is now fencing epee.

“Once [fencing] gets into your blood, it’s really hard to walk away from it. I tried,” Kathleen said. “We love the sport and want to stay a part of it and neither one of us will let the other walk away. We support each other staying involved in it.”

So once again the mother-daughter duo from White Plains, N.Y. is fencing together again. They support each other, push each other every day and give each other a competitive edge.

“It’s been a shifting dynamic. My mother likes to sort of stay how when we started, she would beat me and I would cry and then it got to a point where I would beat her and she would cry, but she would also say that’s probably because I hit her too hard,” Kathleen said jokingly. “Now, I think we work a little bit more together in that we’ll drill together, like I’ll warm her up for practice and we’ll work on a few things together. Now that I’m fencing epee, we have a sleeve that we bought for coaching the high school kids, but she’ll put that on and let me hit her in the arm as long as I don’t hurt her. That’s the rule. I’m not allowed to hurt her.”

“What I always say about Kathleen is she’s my rabbit. I’m always chasing that rabbit and she keeps me alive. She keeps me going,” Diane said. “If I hadn’t have had Kathleen, I wouldn’t be doing this. She just makes me want to do it, she’s always there for me … and she believes in me all the time.”

Now involved in the sport together for the past 17 years, the two also manage the Westchester - Rocklin Division and have coached together at Ardsley High School for 14 years. The women’s foil team has been league champions every year since 2003.

According to the Recklings, fencing together has several advantages. Together, Diane and Kathleen have travelled the world, putting hundreds of thousands of miles on the car to go to NACs, visiting museums and experiencing new places both in the United States and abroad.

“One of the great things about fencing is you do get to go to places you probably wouldn’t go to if it wasn’t for the fencing,” Kathleen said. “I think one of the things I really valued about travelling with my mother is that it was never just go and fence. It was like, ‘if you’re going to be there, take the opportunity to see’ and those have been some the most valuable educational experiences in terms of opening up your eyes to what else is out there, to the diversity of places, to the culture and the stuff that’s not what you’re used to in your own neighborhood.”

During competitions, they both feel less pressure because when one does well, the other can feed off that energy. On the contrast, if one doesn’t perform as she’d hoped, they feel like a team and know if the other can do better, the day can still be considered successful.

Competing and travelling together also allows them to keep a good sense of humor.

“We have so much fun,” Diane said. “We laugh and sometimes you want to cry when it didn’t go well, but that’s the thing. You recover together, maybe you go shopping.”

“Maybe you throw something at the other person,” countered Kathleen while laughing. “That’s happened too. I threw my body cord bag at you once. I did leave a mark. I’m sorry.”

While Diane loves having more of a balance in their relationship in terms of being able to go to Kathleen for advice and Kathleen considers her mother a fighter as Diane has overcome multiple hip replacements, broken bones, tendonitis and a torn meniscus, both value the relationship fencing has given them and how it has allowed them to learn more about each other.

“I didn’t know my mother before fencing,” Kathleen said. “It was through the travelling that I got to see her kindness and her passion for other people, and her toughness, and learned a lot from her about leadership … and also how to read maps, because one of us has to.”

They laugh, continuing with the playful banter. Closer than ever, Diane and Kathleen aren’t just family, but friends, co-workers and teammates that make up Team Reckling. 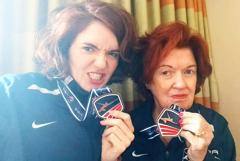 A selfie Diane (left) and Kathleen (right) took in Holland travelling after Vet Worlds in Debrecen, Hungary in 2014. 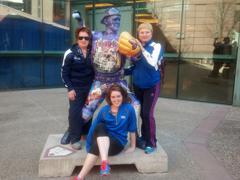 Diane (left) and Kathleen (center) with coach Anya Katkova (right) after a NAC in Minneapolis. 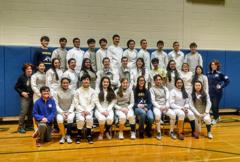 Diane (left) and Kathleen (right) with the Ardsley High School fencing team, which they have coached together since 2003.