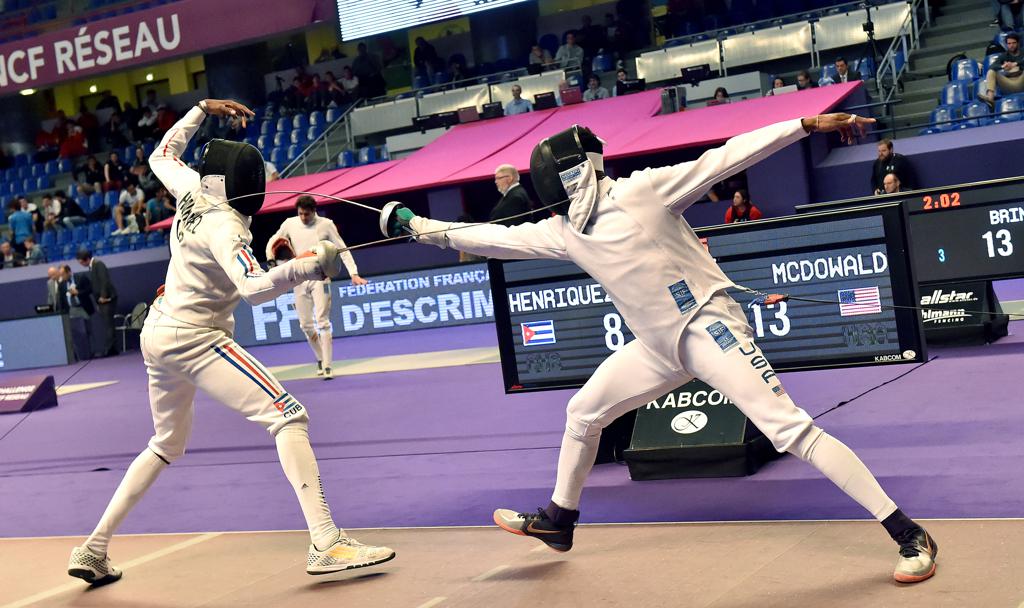 The final men’s épée World Cup of the season, McDowald went 5-1 in pools on Friday before securing 15-13 victories over Niklas Multerer (GER) and Nelson Lopez Pourtier (FRA) to advance to the second day of competition.

In his first bout of the day on Saturday, McDowald faced Reynier Henriquez Ortiz (CUB), a two-time bronze medalist at the Pan American Championships. Jumping out to a 5-2 advantage after the first period, McDowald expanded his lead to five points by the end of the second and went on to win, 15-9.

At 10-9, McDowald took another three unanswered touches to go up, 13-9. Pittet closed the gap to two at 13-11, but McDowald took the final two touches to secure the victory and his first trip to the quarter-finals as a senior.

Standing in McDowald’s way of a medal was World No. 2 Bogdan Nikishin (UKR). Nevertheless, McDowald came out strong, going up, 3-1, but Nikishin evened the score at three at the end of the first period.

McDowald continued to keep the bout close in the second and stole the go-ahead touch with seven seconds remaining in the second to enter the final period with a 7-6 lead. McDowald maintained his lead through the first minute, holding a 9-8 advantage with just less than two minutes to go, but Nikishin found his stride, ending on a 7-1 win to win, 15-10.

Nikishin went on to win silver, his fourth medal on the circuit this season.

With the top-eight result, McDowald takes over the top position in the USA Fencing Men’s Épée Rolling Point Standings.

With a bye into the table of 32, Team USA won eight of the nine bouts, including the first five, to dominate its match with Iran, 45-29. Pryor led the U.S. with a +9 indicator.

In the 16, Hungary took a 19-14 lead over the U.S. entering the final three bouts. Team USA responded, winning or tying each of the three bouts, but the Americans came up just short, 31-30. Hungary went on to win gold.

Fencing Kazakhstan in the 9-16th place table, Team USA got off to a slow start, but tied the match at 11 after three rounds. From there, the U.S. had the momentum, winning of tying the final six bouts for a 45-33 victory.

Team USA then faced Russia, which currently ranks No. 3 in the world. The Americans kept within striking distance throughout the match and went into the eighth bout tied at 18, but Russia took control and handed the U.S. a 39-24 loss.

Down 10-9 to Estonia after two rounds in the match for 11th place, Team USA won six of the final seven to end the day with a 45-30 win. Kraft tallied a +8 indicator for the U.S.