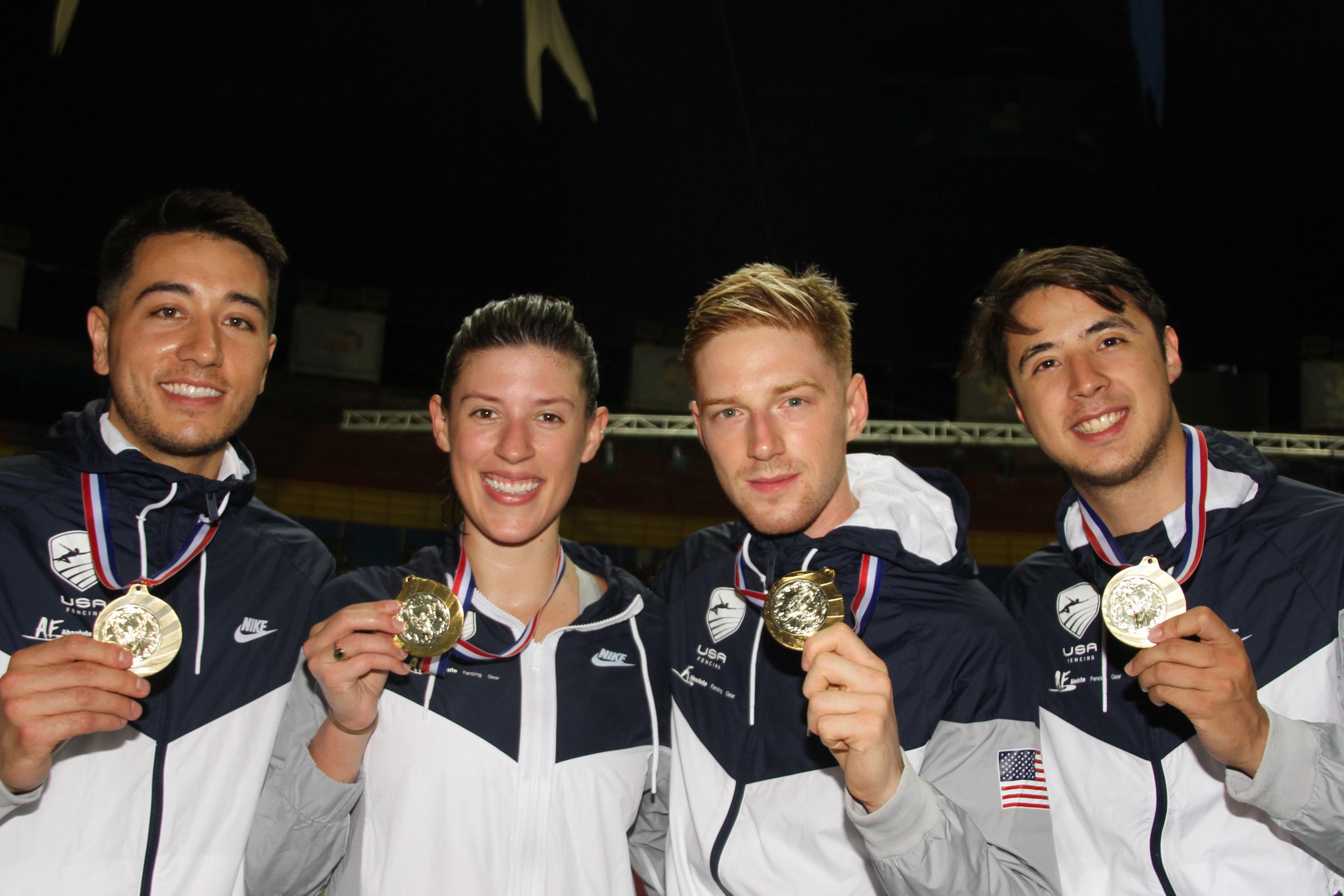 For Imboden, the gold would mark his second straight individual Zonal Championships title and fifth overall – the most for any U.S. man in any weapon.

Imboden was one of three U.S. fencers to go undefeated in pools, taking the fifth seed behind Massialas and 2016 Olympian Miles Chamley-Watson (New York City) who were No. 1 and No. 2. A tough day in pools left Meinhardt with the No. 15 seed.

All four fencers earned byes into the table of 32 and Imboden cruised through his first two direct elimination bouts, defeating Jose Lopez Gonzalez (GUA), 15-2, and 2014 Pan Am bronze medalist Guilherme Toldo (BRA), 15-7, to make the eight

In the quarters, Imboden was tied at four with 2015 Pan Am bronze medalist Heitor Shimbo (BRA), but pulled away to 10-7 by the end of the second period. In the third, he outscored the Brazilian, 5-2, to win the bout, 15-9, and guarantee his seventh career individual Pan Am medal in the last eight years.

In the quarter-finals, Daniel Sconzo (COL) took a 6-4 lead in the first which Massialas cut to 7-6 by the end of the period. Massialas went on a 9-2 run in the second to end the bout at 15-8, securing his eighth career individual Zonal medal.

Meinhardt’s error in pools would set up one of the day’s best outs in the table of 16 as he took on Chamley-Watson in a battle between two friends and Senior World medalists. Although Meinhardt won their last bout at the 2017 December North American Cup, 15-14, this would be their first international matchup since 2013.

After his 15-4 win over Alejandro Hernandez Vasquez (COL) in the 32, Meinhardt opened his bout with an 8-4 lead over Chamley-Watson in the 16 before the 2013 Senior World Champion came blazing back to tie the score at 11 and gain a 14-12 lead in the final minute of the period. Meinhardt scored once more to stay in the game as the bout went to a break. In the second, Meinhardt tied the bout at 14 and scored the winning touch for a 15-14 victory.

“At the beginning of the match, I was pretty aggressive and was confident in my actions. In the middle I was a little tentative and, towards the end I just wanted to make sure I didn’t hesitate and that I just went for it,” Meinhardt said. “I didn’t do great in pools and, unfortunately, Miles and I drew each other in the 16 because of that. It’s always tough fencing your teammate, but it was a really great match and I barely pulled away at the end.”

Meinhardt would qualify for the semis – and a 10th Pan Am individual medal – after a 15-4 win over Henrique Marques (BRA) in the quarters.

In the semis, Imboden and Massialas fenced first with Imboden taking a 9-8 lead after the first period. Massialas pulled ahead at 12-11, but Imboden scored four straight to end the bout, 15-12.

“Obviously, it could have gone a little bit better today because I ended up with a bronze medal, but Race fenced extremely well and he’s No. 1 in the world for a reason,” Massialas said. “I want to win everything I’m in, but I’m glad that an American was able to end up at the top of the podium, winning a gold medal and letting us all listen to the anthem.”

Imboden said it was an “honor” to fence Massialas in a rematch of their 2017 Pan Am final.

“Alex and I are 1 and 2 and I’m fencing one of the best guys in the world and it’s an honor to fence him,” Imboden said. “Both of us just upped out level. We started the bout kind of slow and then we really just upped the level.”

In the second semi, Meinhardt fenced 2013 Pan Am bronze medalist Max Van Haaster (CAN). While Meinhardt led the bout, 3-2, early, the Canadian scored five straight to steal the lead at 7-3. Meinhardt couldn’t make up the gap and Van Haaster took the bout, 15-9.

“I was a little shaky today,” Meinhardt said. “But, overall, there were some good moments and I’m going to try and build on those going into World Championships.”

In the finals, Van Haaster led Imboden, 4-1 before Imboden reeled off 11 unanswered touches to gain a 12-4 lead.

“Sometimes you just have to catch a feeling from a fencer,” Imboden said. “He was very intense and he’s pushing you a lot and he was crushing the distance a lot. So there was a moment where I felt it. I upped my intensity, I upped my speed and found what I needed to find.”

While Van Haaster got on the board again, he couldn’t match Imboden who took the bout, 15-8 to win gold in just under three minutes.

The win also guarantees that Imboden will enter the Senior World Championships in Wuxi, China in July as the No. 1 seed with Massialas as No. 2.

“I’ve been fencing great this season and to be at the top is a blessing and to defend it is always fantastic,” Imboden said. “You come to the Pan Ams and I feel like my toughest competitors are my team. It’s one of the rare occasions that we’ll usually fence each other at some point and it’s been that way for years. To compete against the guys I grew up with, it’s always that inner push to be the top guy in the moment to be the U.S. guy at the top and it’s an honor.”

In the women’s epee event, Kelley Hurley finished 5-1 in pools, but said the single loss took the pressure off for the day.

“I didn’t feel that great in the beginning of the day. I felt really really nervous and then I lost a bout in my pools and all of the pressure fell off me and it was like ‘Ok, I can relax now’ and everything was fine,” Hurley said. “And then I started to pick up steam. I started to get more confidence, my nerves started to fall away and it ended up being a really good day. I was definitely feeling really weird in the morning and then it all kind of melted away.”

In fact, Hurley appeared to have little stress in the DE bouts at all as she kept any opponent from scoring more than eight touches in her quest for a third straight title.

Hurley won her table of 32 and table of 16 bouts by 15-6 margins against Stefania Urania (ARG) and Patrizia Piovesan Silva (VEN) and then bested Malinka Hoppe Montanaro (CAN), 15-8, to qualify for the semis.

Hurley’s teammates, however, did not advance past the table of 16.

In the semis, Hurley found herself trailing 16-year-old Zi Shan Guo (CAN) who held a 10-3 lead in the first before Hurley scored six straight to cut the Canadian’s lead to 10-9 at the end of the first period. In the second, Hurley gave up just two touches on doubles and claimed the victory at 15-12.

“Going into the semifinal bout against the Canadian girl, I wasn’t nervous at all. She’s like three feet shorter than me and I’m like 20 years older,” Hurley laughed. “I thought for sure experience would play a big part in this bout, but when I was down, 9-2, I definitely got worried. But I kept feeling like I was going to come back. I kept feeling like I wasn’t out of it. I always had faith that it was going to work out. Optimism and confidence were the biggest thing. I really trusted myself and knew that I could do it.”

In the semifinals against Isabel Di Tella (ARG), a Harvard graduate and 2014 Pan Am bronze medalist, Hurley held a 14-11 lead in the second, but Di Tella came within a touch of tying the bout at 14-13 in the third before the two opted for a passivity overtime period.

Di Tella had priority in overtime, but Hurley scored the double she needed with 10 seconds on the clock to win the bout, 15-14.

“That bout before with the Canadian, I used up 95% of my energy and I didn’t have a whole lot more left. And I got up, 14-11, and I was just like ‘I’ve just gotta finish it. I’ve just gotta finish it’ and, of course, in that state of mind, the other person always gets a few touches,” Hurley said. “I was just praying for a double. I really wanted to straight fleche her because she’s like eight feet tall so I knew that’s what she wanted and so we just started trying to wear each other out. I could hear her panting. I was panting. Sweat was drenching all down both of us and I just thought that whoever wears the other one down first is going to win this bout.”