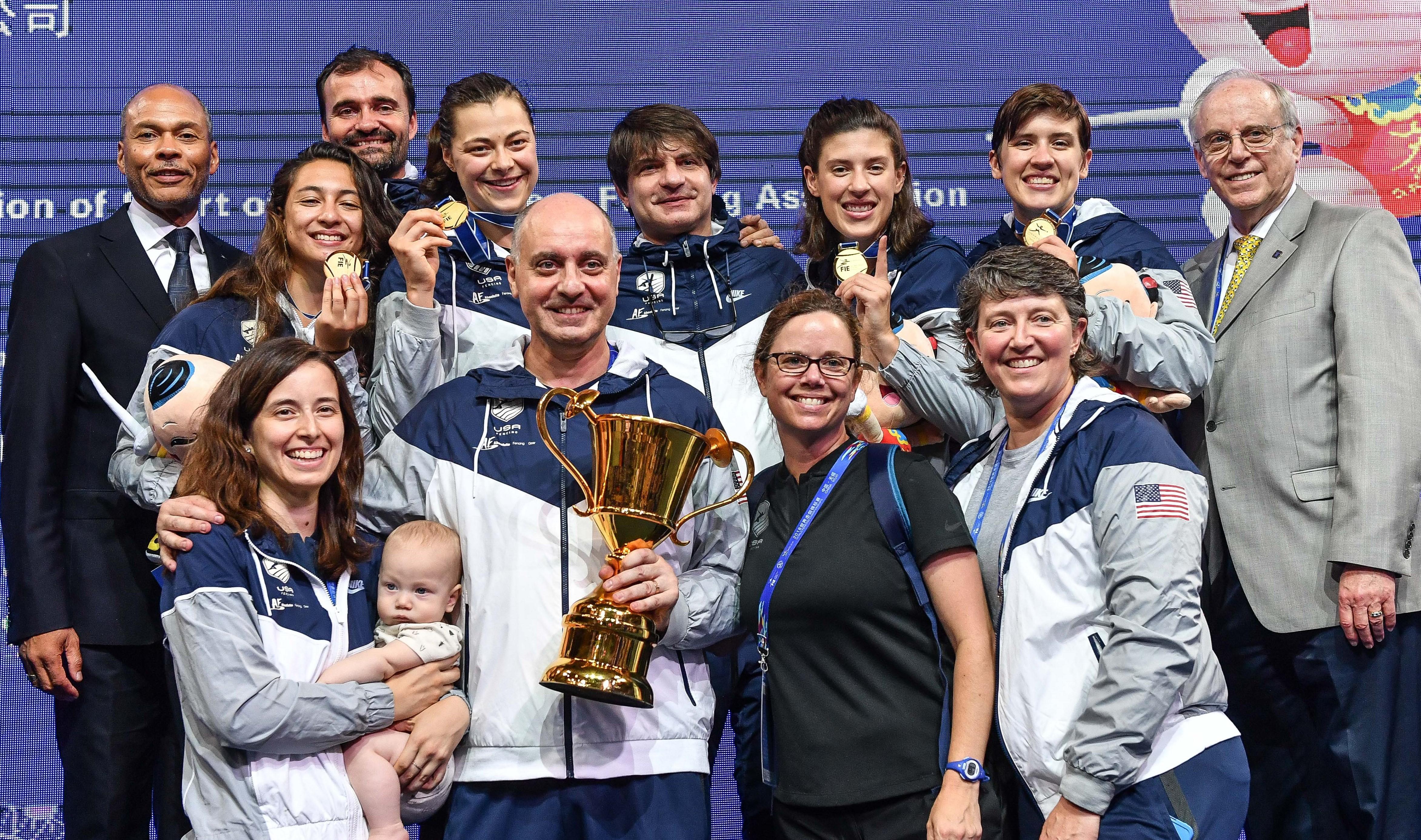 (Wuxi, China) – In the history of USA Fencing, only four teams have ever stood on the top of the podium at a Senior World Championships.

That is until Wednesday when the U.S. Women’s Epee Team brought the total to five with the first Senior World gold medal for an epee team.

The wins wouldn’t come easy as all three matches on came down to one or two-touch margins.

In the quarter-finals, Team USA secured a 24-23 overtime win against Estonia – the reigning Senior World Championships – with Holmes tying the score at 23 with three seconds on the clock. In the sudden death minute, Holmes scored the single needed against two-time Senior World individual medalist Irina Embrich to win the match, 24-23.

With the win, the Americans would advance to the semifinals against Russia, the 2016 Olympic team bronze medalists. Team USA won or tied six of the first eight bouts, but Russia still held a 15-14 lead going into the final bout between Holmes and two-time European Champion Violetta Kolobova. In a fast-based final bout, Holmes outscored Embrich, 6-2, to take a 20-17 lead. With 1.89 seconds on the clock, Kolobova cut Team USA’s lead to one at 25-24. The Russian then barreled down the strip, plowing down Holmes in an attempt to score. A double touch was awarded, but Kolobova also received a red card for the action. With less than one second on the clock, Kolobova ran again, but couldn’t score. By the end, Holmes had outscored Kolobova, 13-10, and Team USA won the match, 27-25.

“We’re slowly starting to trust each other in our positions. We found a great order. When we put Courtney in her position and Kat as a closer, it’s blowing everyone’s minds,” said Kelley Hurley, a two-time Olympian who won bronze with her sister Courtney at the London Games. “It seems like there were times where we were down, but we didn’t lose our cool because we trust our teammates. We trust our teammates to pick up any slack that any of us lose. I think that we’re just working together as a team so well and that’s evident today.”

In the finals, Sirico picked up a key win over World No. 7 Injeong Choi, 4-3, to cut Korea’s lead to 12-10. Courtney and Kelley Hurley fenced defensively for the next two bouts, blanking the rounds to keep the score at 12-10.

“Going into the final bout, there’s a high ceiling. As long as it’s relatively close, I have my plan and I’m going to force the other person to fence my plan and today everybody was fencing with my plan,” Holmes said.

Holmes took on Choi in the anchor bout, fighting to tie the score and taking the last hit with 11 seconds on the clock. With the score tied at 17, the bout went to priority.

“I’ve lost a lot of overtime touches and there’s generally a consistent pattern when I lose them vs. when I win them,” Holmes said. “I just wanted to press. I wanted to go forward. I didn’t want to sacrifice any component of my game and just be dedicated to the plan.”

Again, the tension in the stadium was palpable for more than 30 seconds of the overtime minute before Holmes hit Choi to take the win, 18-17, as her teammates jumped in the air while Holmes screamed, showing emotion for the first time since the start of the overtime period.

Her teammates agreed that Holmes’ nerves of steel make her perfectly suited for the do or die role of anchoring in overtime.

“And that’s why she’s really good at her job – she doesn’t get nervous!” said Courtney Hurley who previously anchored the squad to its overtime win over Russia to win bronze at the 2012 Games. “We thought we could just keep it close until the end because Kat’s been doing so amazing at the end and that’s exactly what we did.”

The win marks the third gold medal of the season for the U.S. Women’s Epee Team who won the first-ever World Cup gold for the squad at the Dubai World Cup in May as well as the Pan American Championships in June and a bronze medal at the Barcelona World Cup in February.

“After Dubai and how amazing we fenced as a team, I felt like we were really getting it together and I knew we could be World Champions. I knew that we could,” Kelley Hurley said. “Of course, everything went into overtime, but Kat has been handling overtimes like a freaking boss and I felt really good about this tournament. I think we deserved it.”

Holmes said their success in Dubai also changed the team’s belief in its possibility for success.

“If you would have asked us a year ago if we would have been World Champions, we would have said ‘Well, it’s epee – anything can happen.’ But, especially after winning our first World Cup, coming into this World Championships we really felt like, for the first time ever, that we could win this,” Holmes said. “It’s not like we go and want to win. We go and it’s ‘Let’s win. Let’s do this.’ And I think we all have that belief. Seeing that come to fruition today and everybody playing their part, it was amazing.”

Both the U.S. Men’s Epee and Women’s Foil Teams qualified for the quarter-finals with preliminary round wins on Wednesday.

The men’s epee team fenced Sweden in the table of 32. Jake Hoyle (New York City, N.Y.) scored a single in the final seconds of the eighth bout to give anchor Curtis McDowald (Jamaica, N.Y.) a 32-31 lead going into the final bout. McDowald scored four straight singles against Linus Islas Flygare and went on to close the match with a 45-39 win.

In the table of 16 against Czech Republic, Rio Olympian Jason Pryor (South Euclid, Ohio) posted a +8 indicator in his first two bouts. Dennis Kraft (Bloomfield, N.J.) joined the lineup and the Americans kept a one-touch lead after eight bouts before McDowald returned as anchor against Martin Capek. Although Sweden led the bout, 35-34, midway through the period, McDowald went on a tear, outscoring Capek, 8-1. With 33 seconds on the clock, Capek backed away and Team USA won the match, 42-36, to secure a position in the quarter-finals against France on Wednesday.