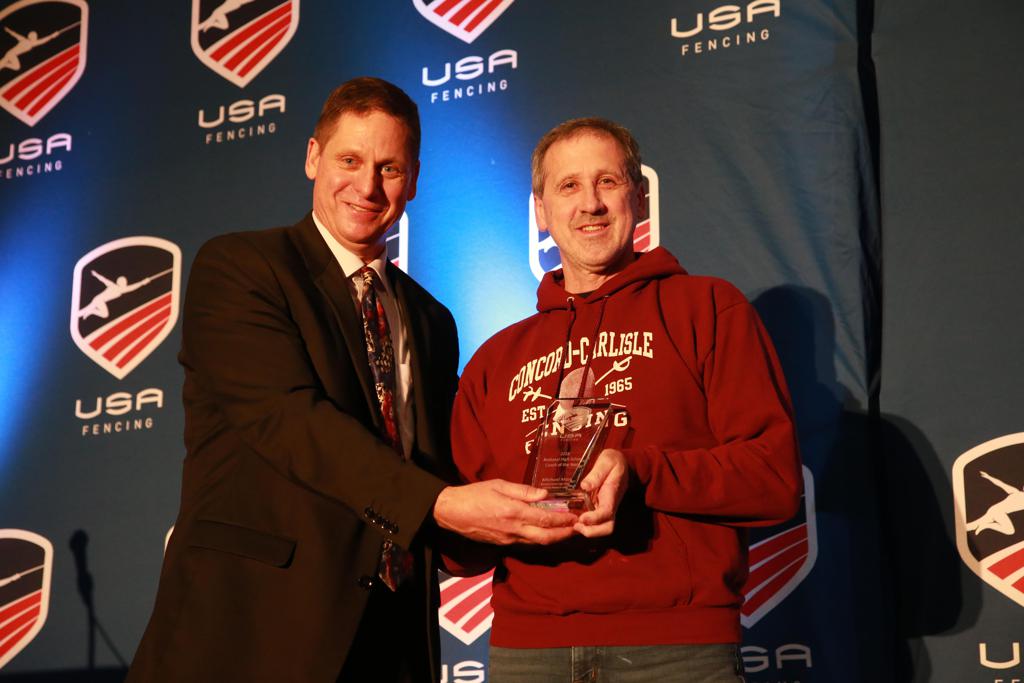 The second year of the award, Marx was one of eight nominees from seven states, receiving a total of six nominations from students and parents. Selection is based majorly on team and individual results during the 2017-18 season with leadership, motivation, and team development and improvement also taken into account.

“Michael Marx has been a wonderful addition to our athletic staff,” Athletic Director Barry Haley (Concord, Mass.) said.  “His belief in educational athletics is evident in every interaction with our student athletes. High School fencing has a wide range of skill ability from beginner to highly accomplished athletes, Michael's ability to engage all of these students allows for an extremely positive experience for all. Joining the longest standing high school program in Massachusetts has had a positive impact not only on our program, but the entire culture of fencing in the state.”

In his first year at the helm, the five-time Olympian and owner of Marx Fencing Academy led Concord-Carlisle High School to the 6-weapon team state championship in Massachusetts and the men’s foil team was crowned state champions, marking an undefeated season for the squad.

“He simply gave us the tools to go and win, made us believe we could win, and always pushed us to give our best,” said Kenneth Liu (Concord, Mass.), who will be a junior next season. “I think every single one of us after one of his pep talks would straighten our backs, and have our internal voice screaming ‘you can do it’ for the duration of the meet.”

Marx took on the head coaching duties on late notice after the previous coach quit. He came in with optimism and worked to build morale on the team despite the late start.

“Once I knew the former coach was no longer interested, I stepped in primarily for the kids,” Marx said. “I have several students from my club who fenced for CCHS and I didn't want them to miss out on the experience.”

Giving individual attention to each fencer but also doing what was best for the team, Marx emphasized teamwork as well as the athletes pushing and helping each other to improve.

“We went from riding the back of a few very high-performing fencers, to becoming a solid team,” Liu said. “Under his direction, people at all skill levels flourished and grew. We went from barely being a team, to being the best 6-weapon team in the state.”

No matter the skill level, Marx made every member of the team feel valuable. He created a balance between focusing on improving, success and also having fun. Practices made the athletes work hard but were enjoyable with games and his sense of humor.

“Michael modeled teamwork and positive coaching,” said Elizabeth Nigh (Concord, Mass.), whose son Max Dolmetsch (Concord, Mass.) will be a sophomore next season. “He expected excellence but rewarded dedication, and inspired with a whimsical sense of humor. Michael encouraged kids to coach each other, and treated meets as coaching opportunities, which seemed to increase fencers' trust in each other.”

And coaching high school students, Marx taught his athletes lessons that extended beyond fencing, such as sportsmanship, hard work and how to strive for excellence.

“Michael Marx taught us how to be great people, he taught us to be respectful of others, humble in victory and strong in defeat,” said Alejandro Cancio (Concord, Mass.), who graduated in the spring. “The lessons that he teaches are not limited to fencing, but can be applied to life as a whole.”