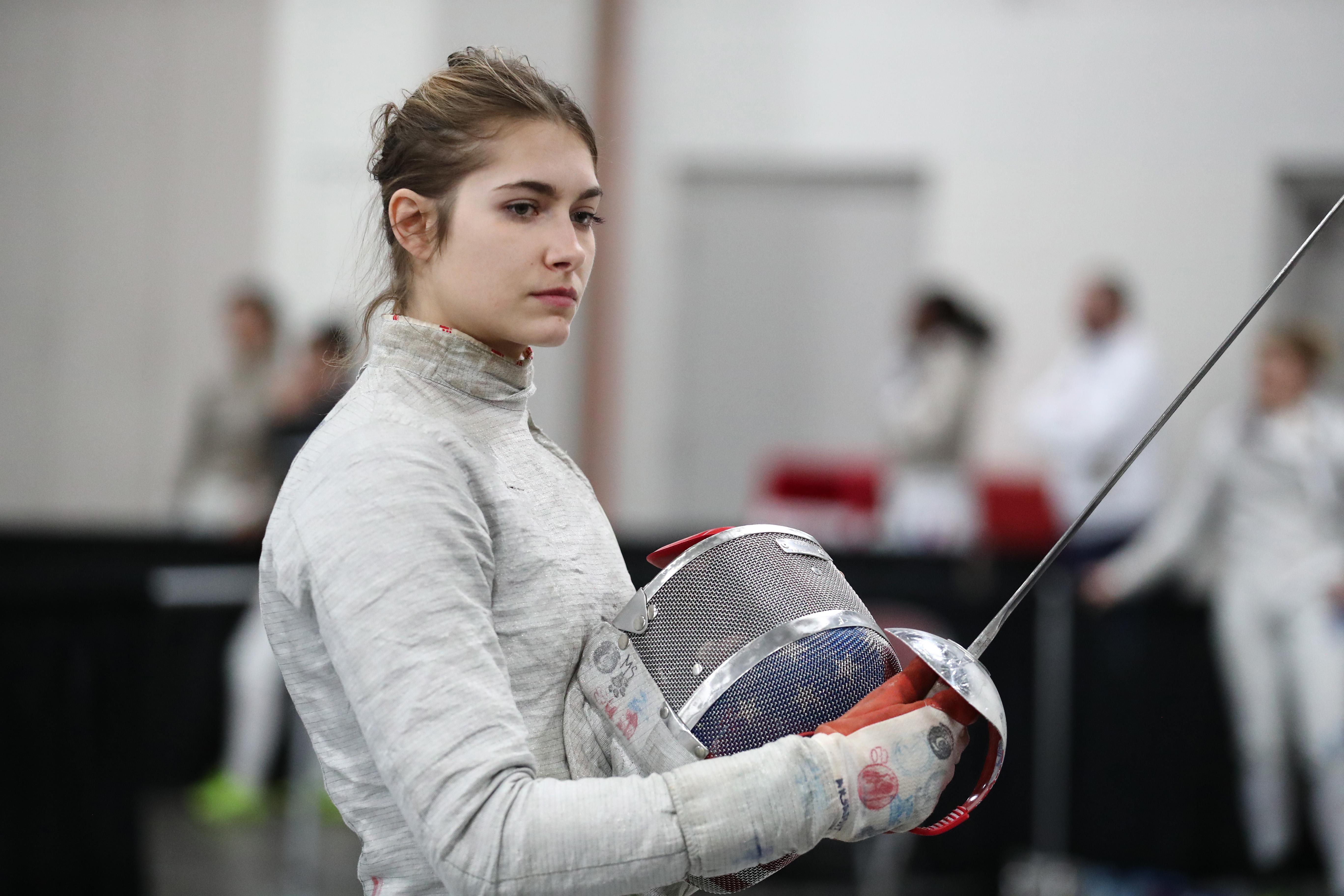 (Salt Lake City, Utah) – When the table of 64 begins on Saturday, more than 20% of the competitors will have USA on their backs at the Absolute Fencing Gear® Salt Lake City Women’s Sabre World Cup.

Although the Americans had only two fencers exempt from the pool rounds – World No. 9 Dagmara Wozniak (Jersey City, N.J.) and No. 10 Eliza Stone (Chicago, Ill.) – Team USA qualified 12 fencers through the pool and preliminary rounds to create a lineup that includes Olympic and World medalists as well as juniors fencing on Day 2 for the first time ever at a senior event.

At the conclusion of the pool rounds at the Salt Palace Convention Center, five of the 16 fencers to advance automatically to the second day of competition were members of Team USA.

Rio Olympic team bronze medalist Monica Aksamit (Morganville, N.J.) not only battled with the flu for the week prior to the tournament, but the three-time Senior World Team member wasn’t even sure if she would make the second day at all, let alone go undefeated.

“When I saw my pool was short, I was worried I wouldn’t even make Day 2,” Aksamit said after discovering that she had six fencers in her pool instead of seven which can be a disadvantage in the rankings. “I’ve been recovering from the flu and, even yesterday, I felt like a soccer player was kicking me in the back, so I really didn’t expect to win all my bouts.”

Aksamit pushed through a pair of 5-4 wins and came away as the top U.S. fencer in pools with a 5-0 record.

Seventeen-year-old Alexis Anglade (Alpharetta, Ga.), a 2018 Cadet World medalist, has competed in senior international events on the World Cup circuit for the last two seasons and earned her first-ever position in the top 64 on Friday, winning five straight to advance.

As one of the youngest fencers to make the 64, Anglade said the key to her successful day was to stay focused on her actions and not the achievements of her competitors.

“I’ve been at this tournament the past two years and I’ve been at other Senior World Cups and I feel like the key is to make sure you’re not intimidated,” she said. “It’s important to respect them and understand that they’re good and that’s why they’re here, but not to be afraid of them.”

One of those experienced fencers is Mariel Zagunis (Beaverton, Ore.) – a two-time Olympic Champion who is fighting to regain her position as one of the top 16 in the world after having a baby in 2017 and only competing in two individual international events last season.

Zagunis dropped one bout to Sara Balzer (FRA), a World Cup silver medalist in 2017, at 5-4, but won her remaining five, including a 5-3 win over 2016 Olympic team silver medalist Olena Kravatska (UKR) and a 5-1 closer against 2017 Junior World Champion Natalia Botello (MEX).

“It feels great to fence on home turf. I really think that having home field advantage as far as how close Salt Lake City is to Portland and the one-hour time change versus what I’m usually competing under I think that I feel even better than normal,” Zagunis said. We had a really great training camp at our club with the Ukrainians and the Turkish and the Argentinian teams, so it was really good preparation for this and good preparation for the rest of the season too since this kind of the kickoff of 2019.”

On Saturday, Zagunis is hoping to earn her fifth career podium finish at a World Cup circuit event on U.S. soil.

“I’m still kind of climbing my way up to the top 16, but you have to take it one tournament at a time and I breezed through pools today pretty well, so I’m looking forward to bringing the energy tomorrow and hopefully getting a good result,” Zagunis said.

Also advancing to the 64 was a face that has been recognizable for fencing fans for many years – Aleksandra Shelton (Tigard, Ore.) – as a four-time Olympian for Poland who won Senior World bronze in 2003.

Now married to husband Brad Shelton, Aleksandra has U.S. citizenship and put on the USA jacket for the first time at a World Cup circuit on Friday.

“I’m so happy. I’m so excited. It’s a historic day, my first time under U.S. flag. My husband’s American, half of my family is American … It was a huge decision, but it’s all about giving yourself chances to achieve more,” Shelton said. “I made the most difficult decision, but I’m so happy. I’m excited that I’m finally on the U.S. team.”

“I’ve been in and out of Portland for years. There’s such a good atmosphere here and I’ve always wanted to have this,” Shelton said. “It was all close today and it’s important to do well because I’m coming here and starting from scratch, so this competition is very important.”

Daniella Timofeyev (Antelope, Calif.), a freshman at Columbia University, is aiming to use this weekend’s World Cup as a springboard to potential Junior World Team qualification as the No. 9 junior in the nation with the top four earning berths on the 2019 squad.

Fencing on the senior circuit for the third time in her young career, Timofeyev won five bouts to advance to the second day, dropping just one to 2018 Senior Worlds top-eight finisher Theodora Gkountoura (GRE), 5-3.

Sada Bâby (Atlanta, Ga.), a three-time Olympic medalist, returned to the international circuit for the first time in 10 years on Friday. After a 3-3 pool result, the 2003 Overall World Cup Champion defeated Pamela Brind’Amour (CAN), 15-11, and Gillian Adynski (Chapel Hill, N.C.), 15-12, in the preliminary rounds.

A member of the 2018 Senior World Team, Princeton freshman Chloe Fox-Gitomer (Portland, Ore.) went 4-2 in pools and fought through a tough DE bout against 2008 Olypmic Team Champion Olga Zhovnir (UKR) for a 15-14 win.

Former Division I National Champion Kamali Thompson (Teaneck, N.J.) finished the pools at 4-1 and also claimed a 15-14 win to make the second day, defeating Kravatska to advance to the 64.

Tori Johnson (Peachtree City, Ga.), who won silver on Team USA with Fox-Gitomer at the 2018 Junior Worlds, ended the pool rounds at 3-3 before scoring wins over Fatima Largaespada (NCA) and Yesol Yang (KOR) by 15-12 and 15-9 margins, respectively.

Two-time Junior World Team medalist Elizabeth Tartakovsky (Livingston, N.J.) was on the team that won silver in 2018 and is currently ranked sixth in the standings. With a 4-2 pool result and a 15-9 win against Kana Urano (JPN), the Harvard freshman could be in a position to earn critical points to qualify for a fourth Junior World squad.