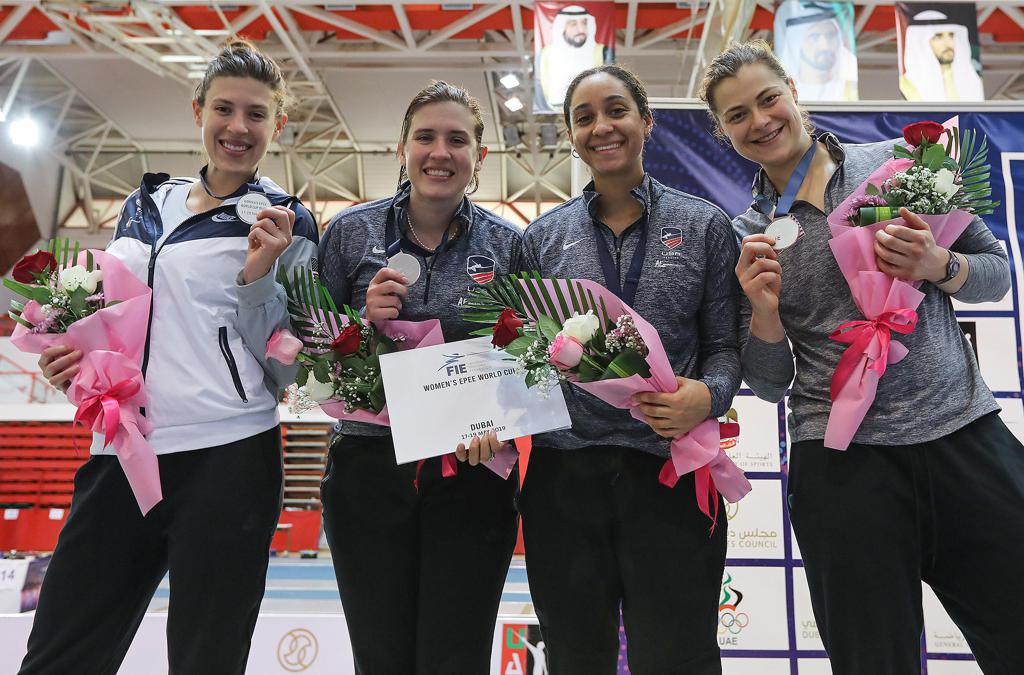 (L-R) Kelley Hurley, Courtney Hurley, Kasia Nixon and Kat Holmes won silver Sunday in Dubai. The medal was the second of the weekend for Courtney Hurley as she also earned silver in the individual event. Photo Credit: Dario Marzi/BizziTeam 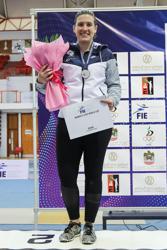 The second competition of the Olympic qualifying period, both Hurley and Team USA took silver, marking the second podium finish in the last three events on the World Cup circuit for Hurley.

Hurley went 5-1 on the day, including two overtime wins.

Fencing 2009 World bronze medalist Anfisa Pochkalova (UKR), Hurley secured the first of her overtime wins, 11-10. After taking a three-point lead in the second, 7-4, Pochkalova tied the score at seven in the third. Still tied at the end of regulation, Hurley took the winning touch just four seconds into the period.

In the table of 16, Hurley built a 12-8 lead over the 2017 Asian Champion who has two medals on the circuit this season, Young Mi Kang (KOR), tying her largest lead of the bout. Kang would get no closer than two points the rest of the way as Hurley won, 15-13.

One win from a medal, Hurley jumped out to a 9-7 lead over 2016 Olympic bronze medalist Yiwen Sun (CHN) with just over a minute left in the bout. Sun, who ranks No. 7 in the FIE World Rankings, equalized with 24 seconds remaining and forced overtime, where Hurley came through again, taking 26 seconds to earn the 10-9 victory.

Hurley’s semifinal bout also would be decided by just one point and this time it was Hurley who needed the comeback. Violetta Kolobova (RUS) took a 12-9 advantage, but Hurley earned three straight single lights to tie the score at 12 with 46 seconds to go. Securing another touch six seconds later, Hurley sustained the lead, finishing with two doubles to clinch a place in her first final this season.

Facing two-time Asian Champion Injeong Choi (KOR) for gold, Hurley fell behind early at 5-1. She closed the gap to two at 12-10, but Choi scored three of the final four points for her second medal on the circuit this season.

Hurley’s silver tied her best result on the World Cup circuit. She now ranks No. 8.

Despite two top-eight results this season, 2018 World Team Champion Kelley Hurley (San Antonio, Texas) was upset in the 64 by 2015 Pan Am bronze medalist Leonora Mackinnon (CAN), 15-8.

A teammate of the Hurley sisters’ at the 2018 Worlds, Kat Holmes (Washington, D.C.) went 6-0 in pools to advance directly to Day 2, but suffered a tough loss to Pochkalova, 6-5.

One day after winning silver individually, Courtney Hurley teamed up with Kelley Hurley, Holmes and Nixon in the team event, taking silver to retain Team USA’s No. 1 World Ranking.

With three of the four members from last year’s team that won its first World Cup team gold, the United States looked to defend its title.

In the table of 16 against Switzerland, Team USA built an early 9-3 lead, but Switzerland cut the lead to one at 24-23 with three bouts remaining. The United States won all three bouts for a 41-34 victory, led by Courtney Hurley, who was +7 on the match.

Team USA then earned a come-from-behind victory in the quarters. Down 28-19 after seven bouts to Korea, Courtney Hurley won the eighth, 15-6, to tie the score and Holmes anchored the team to victory, 45-38 as she won the final bout, 9-4.

Only dropping one bout in the semifinals, Team USA bested China, 45-35, to return to the gold medal final.

However, Poland won the final six bouts in the final to keep Team USA from the repeat, 41-28.