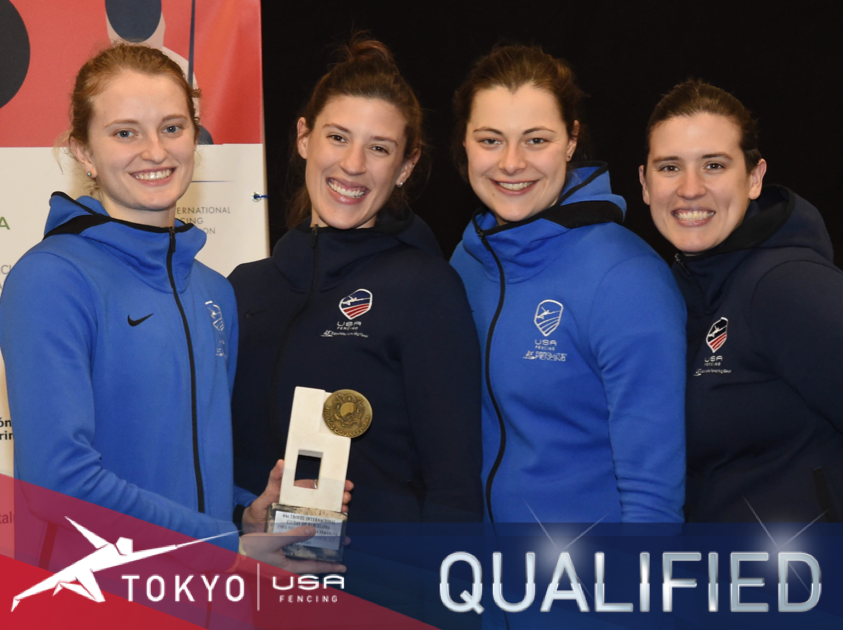 In 2018, Team USA won bronze in Barcelona – a tournament that would prove to be a turning point in the quadrennium for the squad. Following the World Cup, the squad held a training camp and worked with the People Academy during a team-building session in Barcelona.

“We’ve clearly stated that we want to win gold in Tokyo. We want to be Olympic Champions,” said team anchor Kat Holmes (Washington, D.C.) “I think that was really the first step for us, was acknowledging that we shared this collective belief.”

On Sunday, Team USA made a statement not only by winning its third medal during the first four World Cups of the Olympic qualifying period, but by beating 2019 World silver medalist Russia in dominant fashion.

In the opening round, Holmes and teammates Courtney Hurley (San Antonio, Texas) and Anna van Brummen (Houston, Texas) each posted positive indicators en route to a 45-38 win over Romania, the 2016 Olympic Champions.

The quarter-finals pitted Team USA against Hong Kong – a squad that pulled off an overtime upset in the previous round over Italy, the 2019 Senior World bronze medalists. All four fencers competed with Kelley Hurley (San Antonio, Texas) joining the lineup to help the Americans build a 37-29 lead. In the anchor leg, Holmes defeated Kaylin Hsieh, 7-5, to close the win for Team USA at 44-34.

In a rematch of the 2018 Senior World Championships finals, Korea took out the Americans, 45-32, and went on to win gold.

In the bronze medal final, the Americans were tied with Russia at 15 after the fifth bout when Team USA kicked into a new gear when Courtney Hurley bested 2017 Senior World Champion Tatiana Gudkova, 4-1, in the sixth. Van Brummen followed with an 8-6 win over Violetta Khrapina in the seventh and Hurley returned in the next bout to shut out Tatyana Andryushina, 6-0, in the setup leg. With 12 points still on the table, Holmes took on Gudovoka in the anchor bout, winning the bout, 12-5, to close the match with a 45-27 victory for bronze.

In the individual event on Saturday, Holmes advanced to the table of 16 for the second time this season after earning her first individual top eight result on the circuit last month in Havana.

Placing 11th, Holmes bolstered her position as the No. 3 fencer in the USA Fencing National Team Point Standings as she aims to qualify for a second Olympic Team with her Rio teammates, Courtney and Kelley Hurley who are ranked No. 1 and No. 2 in the standings.

With two international tournaments remaining in the qualification period as well as the Division I National Championships, the U.S. Women’s Epee Olympic Team will be announced at the conclusion of the Nationals in St. Louis on April 19. The top three fencers in the National Team Point Standings will qualify for the individual and team events in Tokyo with the fourth fencer serving as the replacement athlete for the team event only.

After a 5-1 finish in the pool rounds on Friday, Holmes won each of her next two preliminary table bouts by one-touch margins to make the table of 64.

Fencing Laurence Epee (FRA) in the first direct elimination bout, Holmes scored three singles at the end of the bout and doubled to take the win, 15-11.

In the 32, Holmes came up against two-time Olympic medalist Yiwen Sun (CHN) and put up a 6-2 run to end the second period with an 8-4 lead that she protected in the third, closing with a 15-11 win over the tournament’s No. 3 seed.

It was 2019 World University Games Champion Alexandra Louis Marie (FRA) who would end Holmes’ run, however. Posting a 5-1 run in the second period and winning the bout in the third, 15-11, before going on to earn her first World Cup silver medal.

Isis Washington (East Orange, N.J.) earned her first top-32 World Cup result of the qualification period in Barcelona. After a 6-0 result in pools, Washington drew her teammate, van Brummen in the table of 64. The pressure would be on for both fencers as Washington seeks to pass van Brummen who currently sits as No. 4 in the point standings. Although van Brummen held a 14-11 lead in the third, Washington came back to tie the bout with three singles. After a pair of doubles, it was Washington who earned the 15-14 win.

In the 32, however, Washington couldn’t come back against a strong opening start by Amalia Tataran (ROU) who took a 9-3 lead after the first period and closed at 15-7 in the second.

Tataran’s win followed a table of 64 victory by the Romanian over Kelley Hurley, outscoring the three-time Olympian, 5-3 in the second, to end the bout at 15-13.

While both Hurley sisters began the day ranked among the top 16 in the world and exempt from pools, Courtney also lost her opening bout, falling to 2015 Pan American Championships bronze medalist Leonora Mackinnon (CAN). Hurley stayed within two touches of her opponent throughout the bout, but couldn’t pass the Canadian who won the round, 15-13.