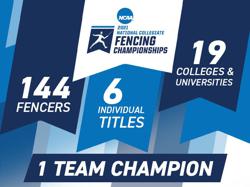 (Colorado Springs, Colo.) – Just days after the field was announced for the 2020 NCAA Championships, COVID-19 brought the world to a halt.

This weekend, the NCAA Fencing Championships will be held for the first time since 2019 with 144 athletes representing 19 schools during the four-day event at Penn State which begins on Thursday and continues through Sunday.

Each athlete will fence 23 individual five-touch bouts over the course of a grueling two days with the top four athletes advancing to the semifinals which features a 15-touch direct elimination bracket.

With the Ivy League not holding competition for winter sports, the door is open for both individual and team titles.

The 2021 NCAAs is guaranteed to have six first-time champions in the individual event as only three athletes out of the field have previously stood on the podium at all and none have won individual gold.

Penn State made the best of the home advantage, repeating their 12 qualifiers from 2012. The Nittany Lions have won 13 NCAA team championships since the men’s and women’s team events were combined in 1990 with their last team title coming in 2014.

Penn State’s lineup is led by senior saber fencer Zara Moss (Cranberry Township, Pa. / Advance Fencing and Fitness Academy), a 2018 Junior World team silver medalist who won silver in her first two NCAA campaigns and was among the fencers to watch for gold before the tournament was cancelled last year.

A 2019 Junior World team silver medalist in epee, Jonathan Piskovatskov (Houston, Texas / Alliance Fencing Academy) won the Mid-Atlantic / South Regional to qualify for the 2020 NCAAs as a freshman. Now, Piskovatskov is looking to pick up where he left off and potentially bring Penn State its first men’s epee title since Daniel Landgren (Newton, Mass.) won gold in 2000.

Three of Notre Dame’s six team titles have come within the last decade with wins in 2011, 2017 and 2018 with the Irish earning at least one individual title in nine of the last 10 years.

For the first time in the program’s history, the University of California San Diego qualified a full roster of 12 fencers to the NCAAs. While eight members of the UCSD are competing at the event for the first time, men’s epee fencer Ziad Khayat (San Jose, Calif. / East Bay Fencers Gym) will be one of the ones to watch as a seventh place finisher at the 2019 NCAAs. Ben Hadler (San Francisco, Calif. / San Francisco Fencers Club) earned Third Team All-America status as a freshman in foil in 2019 and will be back for more.