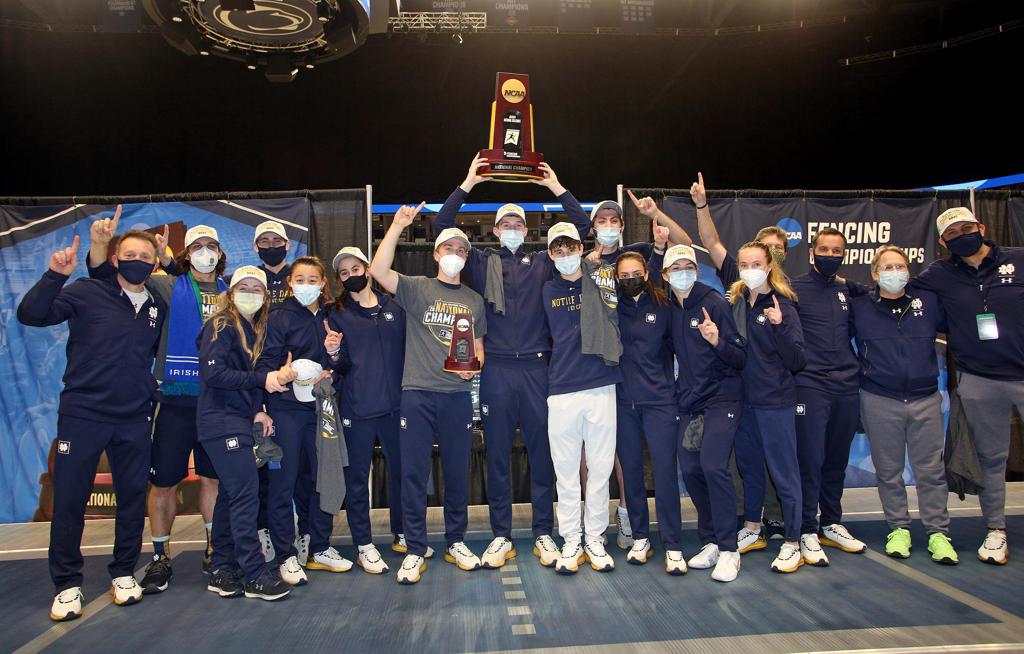 (Colorado Springs, Colo.) – The University of Notre Dame won its 11th team national championship and took four of the six individual titles this past weekend at the NCAA Championships.

Held at the Bryce Jordan Center at Penn State University from March 25-28, the championship marked the third in the last four years the event has been held for the Irish and the 11th championship ties football for the most titles of any sport at Notre Dame.

One of three schools to enter the competition with a full squad of 12, Notre Dame finished with 201 points, the most by any team in the history of the NCAA Championships in the current format and breaking the record of 195 set by Penn State in 2002 and 2009.

The title was clinched for the Irish in the fourth round of the women’s épée competition by Miriam Grady (Broomfield, Colo. / Escrime Du Loc) with her win over Penn State’s Axelle Wasiak (State College, Pa.) Overall, Notre Dame had the most, or tied for the most points, in five of the six weapons.

Of the six individual National Champions, five were current or former U.S. Junior and Cadet World Team members with Griffiths, Olivares, Deschner and Kara Linder each having won medals at the Cadet World Championships.

This year’s individual events included First-Team All-Americans from a total of seven colleges and universities. The following teams each had athletes earn positions on the individual podium:

A complete breakdown of each of the individual events is below:

Griffiths, the 2017 Cadet World silver medalist who won 16 of his 23 round robin bouts to take the No. 3 seed, took an early 6-2 lead over Hondor after the first period. With Griffiths within one point of victory at the second break at 14-10, Hondor scored three straight to cut the lead to one, but Griffiths responded to secure a berth in the final, 15-13.

The other semifinal featured a matchup between two Junior Worlds teammates who won silver on the U.S. Men’s Épée team in 2019. Down 11-10 against Piskovatskov, Ewart finished the bout on a 5-1 run for a 15-10 victory and the opportunity to compete for an individual title.

In the final, Griffiths faced a 9-7 deficit, but finished on a 6-1 run to win the men’s épée title for Penn State for the first time since 2000.

In the second semifinal, Machovec faced Finn Hossfeld (Briarcliff Manor, N.Y. / Tim Morehouse Fencing Club), who became the first men’s foil fencer from Duke to advance to the top four in school history. Machovec went on a 7-1 run to break a 4-4 tie and went on to win, 15-10.

Linder, a three-time Junior and Cadet World Team member who won the most bouts of any fencer in the round robins with 21, fenced Walker in the semifinals, taking an 8-3 lead at the break and advancing the final, 15-6.

The second semifinal saw Smith finish on a 6-0 run to also win, 15-6, and set up another final between two Irish, guaranteeing the first men’s saber championship for Notre Dame since 2000.

Like in his semi, Linder once again built an 8-3 lead at the break and went on to win his first NCAA title, 15-7.

History was made in the women’s épée competition as Fekete, a Junior National Team member for Hungary, won the first championship in any weapon for Long Island University.

Fekete, who entered the semis as the three seed, faced Grady in her semifinal. Tied at nine apiece, Fekete scored two straight touches and the led the rest of the way, reaching the final, 15-13.

Earlier in the first semifinal, Kaylin Hsieh (HKG / Notre Dame) held a narrow 4-3 advantage over Nicole Gavrilko (ISR / St. John’s) after the first period. Extending her lead to 10-6 going into the final period, Hseih secured a pace in the final, 15-9.

In the final, overtime would be required to decide the champion. Hsieh went up 12-11 with 41 seconds to go in regulation, and after a double touch, Fekete evened the score at 12 with 13 seconds remaining and took the bout to overtime. After two double touches, Fekete earned the single light with 17 ticks left on the clock to make history for LIU.

The semifinals in the women’s foil event included Deschner as well as Samantha Catantan (PHI / Penn State), who was a perfect 20/20 in the round robins, Amita Berthier (SGP / Notre Dame), and Lodovica Bicego (ITA / Penn State).

In the second semi between a pair of Penn State teammates, Bicego overcame Catantan by a point, 15-14. Down 12-9, Bicego came back to even the score at 13 and tied at 14, earned the decisive touch.

Deschner came out firing in the final, scoring the bout’s first seven touches. Up 13-3, Bicego fought back, but Deschner added another championship for Notre Dame, 15-9.

Like in women’s foil, Notre Dame had not won the women’s saber title since 2017.

With her win, Linder not only took the title back to South Bend, but clinched the second title for the Linder family after younger brother Luke won the men’s saber gold.

Miller, who fenced Karolina Kaleta (POL / St. John’s) in the semis, led 8-3 at the break and went on to win the bout, 15-9, and become the first saber fencer from Northwestern to advance to the NCAA finals.