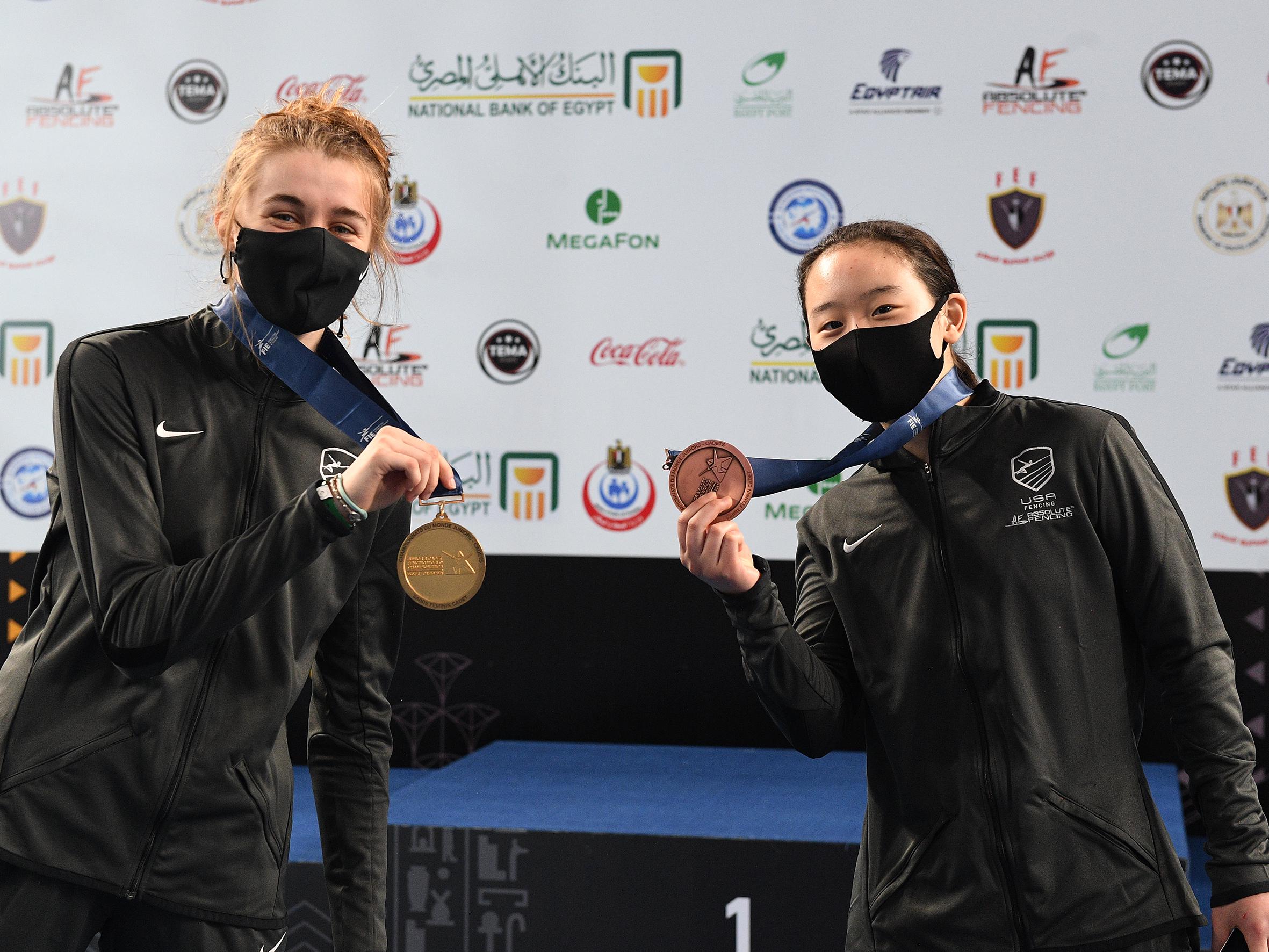 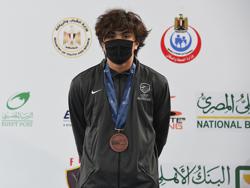 (Colorado Springs, Colo.) – As an Oregon native, 15-year-old Magda Skarbonkiewicz (Portland, Ore.) was inspired by watching two-time Olympic Champion Mariel Zagunis (Beaverton, Ore.), both at the Olympic Games as well as at Oregon Fencing Alliance where they both train.

Now, 20 years after Zagunis won her first Cadet World title in 2001, Skarbonkiewicz joins her role model on the prestigious list of U.S. women’s saber fencers to win a Cadet World Championship, becoming just the fifth to do so and the first since 2009.

“I don’t believe it. This is crazy,” said Skarbonkiewicz who is coached by her father and former Div I National Champion Adam Skarbonkiewicz (Portland, Ore.) “It’s mind-blowing that I’ve been training for a whole year and then suddenly I go to my first competition in a year and I win.”

The medal was one of three for Team USA on Sunday as Zoe Kim (Basking Ridge, N.J. / Kaprica United Fencing Academy) and Colby Harley (Alpharetta, Ga. / Nellya Fencers) also earned podium finishes with both taking bronze in the women’s and men’s events, respectively. After the second day of competition, the United States currently ranks second in overall medals behind Russia who holds four.

After making the Cadet World Team last year but watching the tournament be canceled due to COVID-19, Skarbonkiewicz took advantage of this year’s opportunity, going 5-0 in the direct elimination bouts in Cairo.

With a bye into the table of 32 following a 3-2 effort in pools, Skarbonkiewicz dominated her bout against Franziska Tanzmeister (AUT), giving up just three points for a 15-3 victory.

Skarboniewicz’s table of 16 bout would be her closest of the day. Despite taking a 14-8 lead over Gulistan Perdibaeva (UZB), Perdibaeva came back to even the score at 14. Nevertheless, the high school freshman stayed composed and took the final touch.

In the quarterfinals, Skarbonkiewicz fenced Alina Pastukhova (RUS), the 2020 cadet bronze medalist at the European Championships who had defeated Skarbonkiewicz’s teammate, Lola Possick (Weehawken, N.J. / Advance Fencing and Fitness Academy), 15-6, in the 32. Up 8-6 in the second period, Skarbonkiewicz scored five straight touches to open a commanding lead and went on to win, 15-9.

With a medal guaranteed, Skarbonkiewicz jumped out to an 8-1 advantage in the semifinals, besting Zarifa Huseynova (AZE), 15-9, to secure a berth in the gold medal final.

Fencing for gold, Skarbonkiewicz built an 8-5 lead over Yulia Salabai (RUS) at the break. Salabai scored the first point of the second period to cut the lead to two, but Skarbonkiewicz clinched the gold by ending the bout on a 7-1 run for a 15-7 victory.

Standing on the podium next to Skarbonkiewicz was Kim, who was competing for the second day in a row after taking a top-32 finish in the junior event on Saturday.

A two-time Cadet World Team member, Kim was a perfect 5-0 in pools to take the No. 3 seed and a bye ot the table of 32, where she easily controlled her table of 32 bout against Viktoriia Korotchenko (UKR), 15-5.

In the quarterfinals, Kim faced an early deficit, trailing Teodora Neagu (ROU), 5-1. Fighting her way back to just a one-point deficit at the break at 8-7, Kim won the first touch to pull even. Still tied at 11, Kim had the momentum, scoring the final four points of the bout to secure a medal and overcome Neagu, 15-11.

The semifinals saw Kim once again in need of a comeback, losing 8-5 to Salabai at the break. Kim pulled within two at 11-9, but this time came up short, 15-10.

This year marked the second straight Cadet Worlds that Team USA had two cadet women’s saber fencers on the podium and the fourth straight tournament a U.S. fencer has brought home a medal.

Similarly, Harley’s bronze medal in the men’s event guaranteed a fifth straight Cadet Worlds with a U.S. men’s saber fencer on the podium.

Harley, who won the 2020 Cadet Pan American Championships days before the COVID-19 shutdown, went 6-0 in pools to earn the No. 3 seed in the bracket and 3-1 in the direct elimination rounds, holding his first three DE opponents to single digits.

In the quarters, it was Harley that jumped out to the quick start, building a 7-0 lead over Bexultan Abzhal (KAZ). Although Abzhal cut the gap to one point at 8-7, Harley once again went on a run to close out the victory, this time 5-0 to guarantee a medal, 15-8.

Fencing for a place in the gold medal bout, Harley faced Marco Sovar (ROU), who was competing at his second Cadet Worlds. Harley trailed 8-4 at the break and couldn’t muster the comeback, falling 15-10. Sovar went on to win gold.