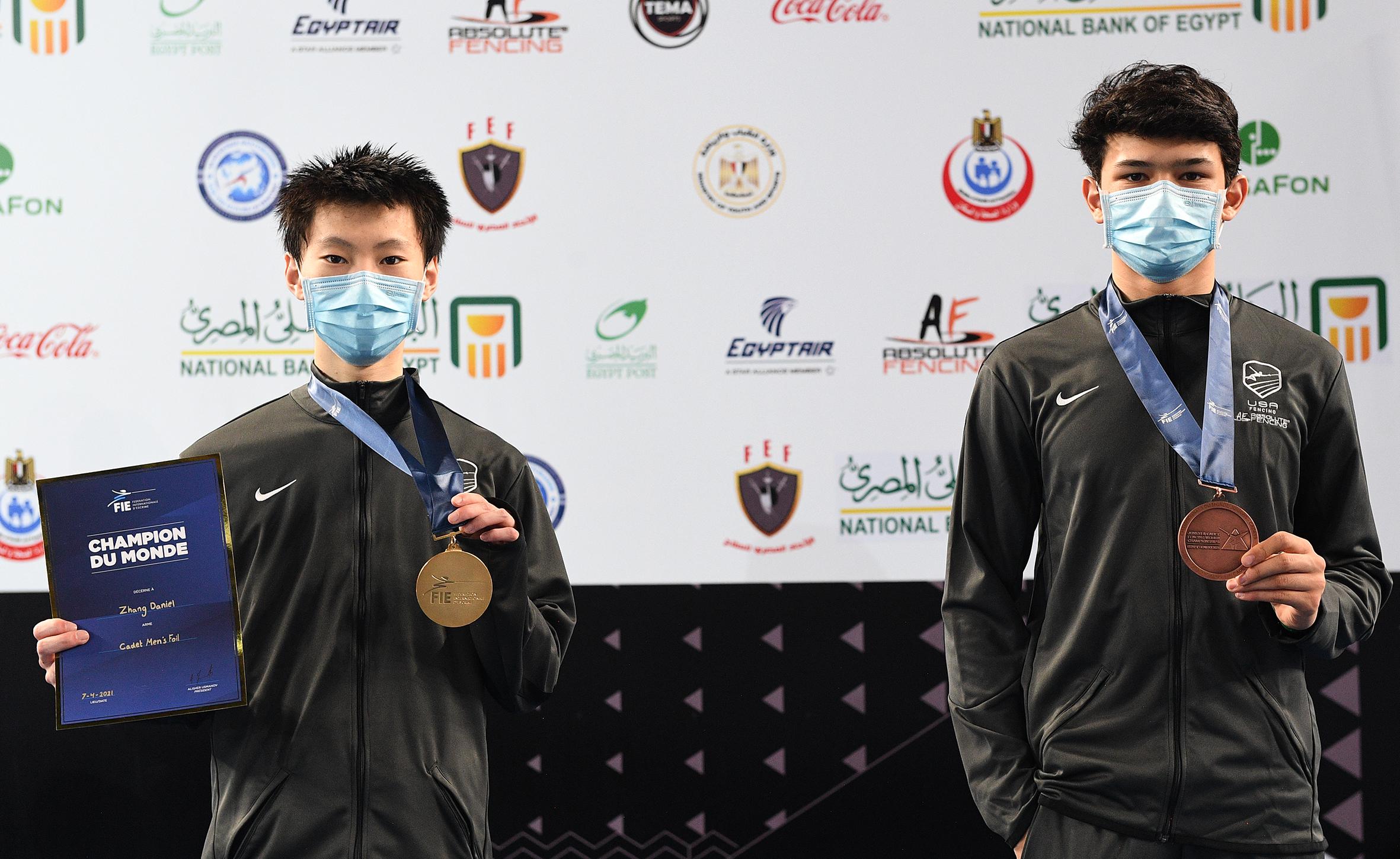 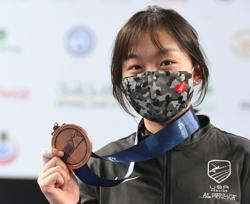 Standing next to Zhang on the podium was Chase Emmer (Morristown, N.J. / V Fencing Club) who earned bronze. This marks the second time in the last three Cadet Worlds two U.S. cadet men’s foil fencers have stood on the podium together.

Team USA now takes the top spot in the standings in the medal count. Tied with Russia with eight medals, Team USA now has three golds, which ranks No. 1 of all countries.

“It was really tough getting here and I had to fence a lot of tough people, but I worked through it and [the win] feels good,” said Zhang, a two-time Cadet World Team member who was competing at his first Worlds after last year’s event was canceled.

Competing for the second straight day after taking a top-32 finish in the junior event on Tuesday, Zhang was a perfect 6-0 in pools before going 5-0 in the direct elimination rounds.

After cruising through his first two bouts against Alexander Hubner (AUT) and two-time Junior World Team member Lorenzo Mion (BRA) by 15-4 scores, Zhang fenced 2020 Cadet Pan Am silver medalist Bogdon Hamilton (CAN) in the quarterfinals, using a 3-0 run to close the bout for a 15-12 victory.

With a medal secured, Zhang faced his teammate Emmer, guaranteeing an American would be fencing for gold. Tied at two, Zhang ended the first period on a 3-0 run to take a 5-2 lead. Going up 13-8 at the second break, Emmer pushed to narrow the gap, scoring the first touch of the third period, but Zhang earned the final two touches he needed to advance to the gold medal final.

Down 9-8 in a close bout with Hyeonbhin An (KOR), Zhang scored four straight touches to take the lead, 12-9. Holding onto a two-point advantage at the break, Zhang once again closed out strong, opening the period with two touches to become the Cadet World Champion.

A first-time Cadet World Team member, Li didn’t look like a newcomer in pools, going 5-0 to take the No. 2 seed. To reach the quarterfinals, he overcame Igor Wozniak (POL), 15-8, and Maksim Donskoi (RUS), 15-9.

With a medal on the line, Emmer jumped out to a 2-0 lead in the first period, which he expanded to four points at 6-2 at the second break. With 32 seconds on the clock, Emmer’s lead was five touches at 11-6, and although Li closed the gap, he ran out of time and Emmer moved on, 12-9.

In the women’s competition, first-time Cadet World Team member Jing started her journey to bronze by going 5-0 in pools and edging out Lena Jerz (POL), 15-13, in the table of 32.

The 2020 Cadet Pan Am Champion then advanced to the quarterfinal with a 15-9 victory over Jessie Chen (CAN), who had also competed in the individual junior competition in Cairo.

In the quarterfinals against 2019 Cadet World Team member Alisa Isbir (TUR), Jing opened up a 5-2 lead and continued to build on it. Up 14-9, Isbir scored four straight touches to cut Jing’s lead to one, but Jing earned the decisive touch to guarantee herself a medal.

Jing’s semifinal opponent was the favorite entering the competition, Jessica Guo (CAN). A 2019 Senior World Team member and 2019 Pan Am Games silver medalist, Guo took and early lead and claimed the bout, 15-4, in the second period. Guo claimed her second medal of the tournament, adding a gold to the bronze she won in the junior competition on Tuesday.