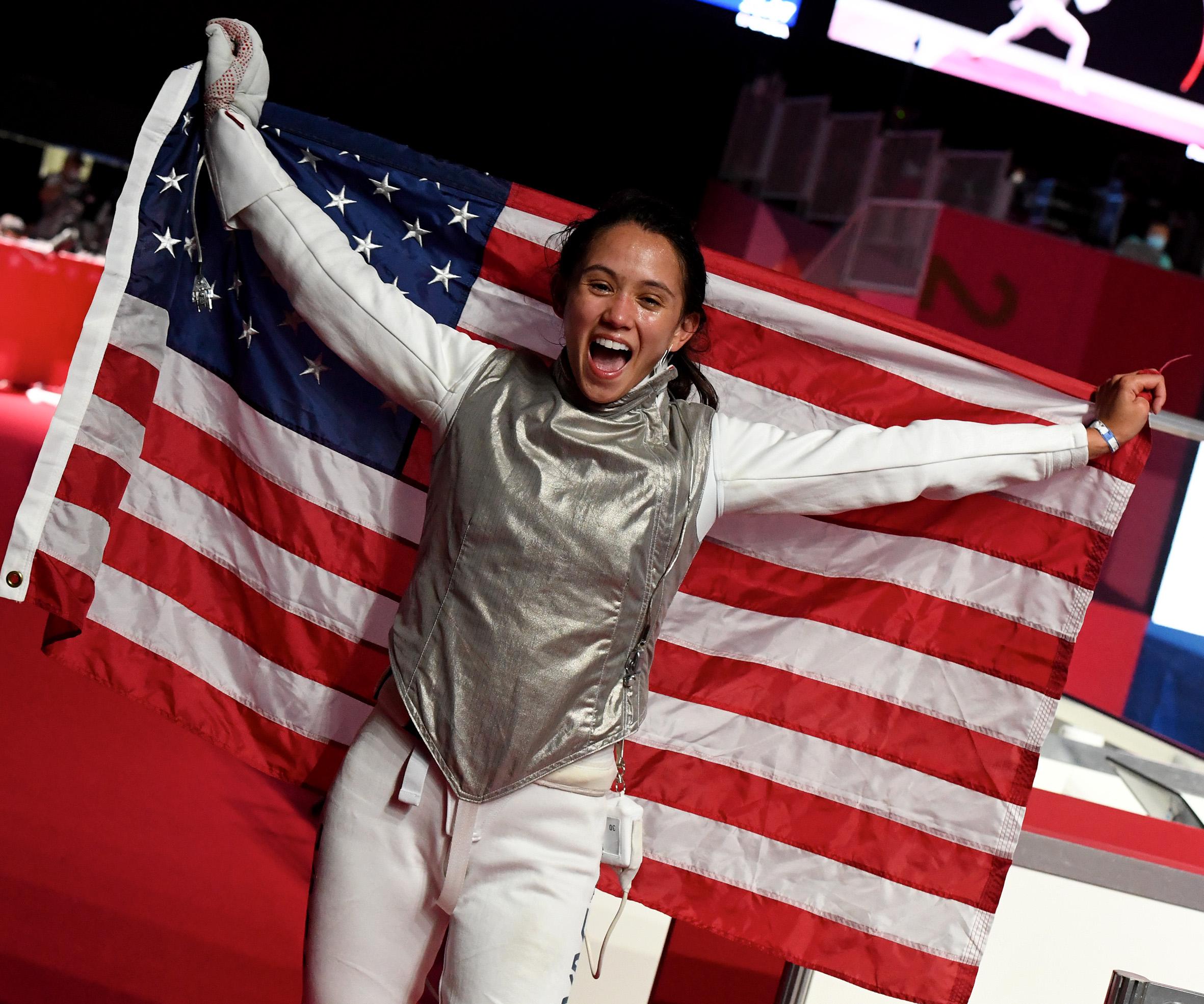 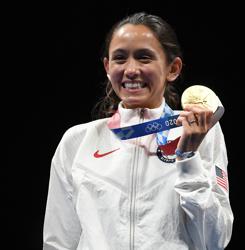 (Tokyo) – When the COVID-19 pandemic caused the Olympic Games to be shut down to spectators, the game changed for many athletes.

“I don’t need a crowd. I just need my husband, my coaches and my teammates. That’s more than I could ever need,” she said when asked what it was like to fence at her third Olympic Games in front of nearly empty stands.

And she had all of those people every step of the way as she went undefeated to become the first U.S. foil fencer and third U.S. fencer in any weapon to win Olympic gold on Sunday. Her title comes nearly 13 years after her Tokyo teammate, Mariel Zagunis (Beaverton, Ore. / Oregon Fencing Alliance / Notre Dame), won her second career title at the Beijing Games in 2008.

“It took my husband, my teammates, my family, my coach – to pull me up in the moments I didn’t believe in myself,” said Kiefer whose Tokyo teammates include her husband, men’s foil fencer Gerek Meinhardt (San Francisco, Calif. / Massialas Foundation / Notre Dame) who will compete in his individual event on Monday after winning bronze in team in Rio.

“This whole day, they’ve been there and I think they literally won bouts for me by being like, ‘Believe! Be confident!’ That’s what it takes at the Olympics and they did it for me,” Kiefer said.

Kiefer’s teammates were there for every touch of her five straight bout wins, including a 15-13 victory in the finals over reigning Olympic Champion Inna Deriglazova (RUS).

Ranked No. 5 in the world going into the Games, Kiefer would fence Amita Berthier (SGP) in the table of 32 – a sophomore at Kiefer’s alma mater, Notre Dame – and take the win in the first period with a score of 15-4.

Kiefer would need the support of her fencing family in the next bout as she found herself needing to dig out of a hole against Eleanor Harvey (CAN) in the table of 16.

Harvey, who upset 2012 Olympic silver medalist Arianna Errigo (ITA) in the table of 16 at the 2016 Games, is a familiar opponent for Kiefer. On the record books, the two have fenced six times internationally as seniors with Kiefer taking all but one of those bouts. However, Harvey was Ohio State’s top fencer at the same time Kiefer was fencing for Notre Dame and the two met countless more times on the NCAA and North American Cup circuits.

There are few competitors in the field who could be as familiar with Kiefer as Harvey and it showed as the Canadian took a 7-3 lead after the first period. During the second period, Kiefer credited Meinhardt and her teammates as she joked that they “brought me back from the dead.”

“They believed in me when I didn’t believe in myself,” said Kiefer who clawed back into the bout, touch by touch, tying the score at 10 at the start of the third period and ending with a 15-13 win.

In the table of eight, Kiefer opened aggressively against World No. 7 Yuka Ueno (JPN), keeping the pace fast and ending the first period up, 12-8.

Kiefer took two touches and nearly ended the bout with a third that was missed. Ueno capitalized with three scores before Kiefer closed out at 15-11.

After a two-hour break, Kiefer took on the first of two opponents now representing the Russian Olympic Committee in the final rounds.

The semifinal saw Kiefer fence 2012 Olympic team silver medalist Larisa Korobeynikova (ROC). While Korobeynikova won their last bout in March at the Doha Grand Prix, Kiefer crushed through the semifinal, defeating the Russian, 15-6, to set up the final against Deriglazova.

Kiefer and Deriglazova have fenced at all levels for more than a decade, dating back to Kiefer’s earliest days on the junior circuit as a 13 year old in 2008.

As seniors, the two have fenced 10 times with the Russian winning four of the last six bouts.

While Deriglazova has a tendency to control bouts early, Kiefer ended the first period with an 8-7 lead, but the six-time Senior World Champion was undaunted and tied the bout at 12 in the second. Kiefer replied with two touches and Deriglazova earned another to stay within a touch of Kiefer at 14-13. Kiefer countered Deriglazova’s final attack to score once more, winning Olympic gold, 15-13.

Throughout the day, Kiefer said she enjoyed the experience of fencing and having fun at her third Games before returning to finish her final year of medical school at the University of Kentucky in the fall.

“I felt like I was able to be myself, be explosive and a little wild and have fun,” she said.

After her final win, Kiefer reflected on a career that has, at just 27 years old, spanned a dozen years on the Senior National Team.

“It’s really the whole journey. Before I left, my dad wrote me a card and he said that we’ve been on this journey. We’ve done our best and our pot of gold has been filled the whole time as we move along, and so just being here is just icing on top, but I just feel so much love and I just have so much to give back to everyone,” Kiefer said.

Kiefer also credited her foil teammates for their support not only on tournament day, but over the course of the months and years they have trained together.

“I owe so much to the foil team. We all pretty much relocated to Colorado Springs to train with each other for the past five months,” Kiefer said. “We’ve had all of our best days, our worst days and all of our Olympic dreams together. It’s been an incredible half year, despite the crazy circumstances of COVID.”

While she may have reached her lifelong goal of becoming Olympic Champion, Kiefer’s next focus is Monday’s events when Meinhardt takes the strip in men’s individual foil with team events for the women to follow on Friday with the men competing on Aug. 1.

“I haven’t made it that far,” Kiefer laughed when asked how she would celebrate her title. “I’m focused on men’s foil team and Gerek and then women’s foil team because I owe everything to those people.”

A 2012 Olympian returning for her second Games, Ross came one win from fencing Kiefer in the quarter-finals, opened with a 15-5 win over Irem Karamete (TUR) that included a 10-touch run to advance to the table of 16.

Ross stayed close to Ueno, needing just two touches to tie the 2018 Junior and Cadet World Champion at eight, but Ueno began picking off touches in the third to take a 14-7 lead. Ross scored twice more, but Ueno finished strong at 15-9 as Ross ended the day in 12th place.

Dubrovich fenced Leonie Ebert (GER) – a 21 year old rising star in the sport who holds three World Cup circuit medals to her credit. Ebert pushed to a 14-11 lead in the second period, but Dubrovich remained steadfast, scoring three more to tie the score before Ebert took the last touch and a 15-14 win. Dubrovich placed 21st overall.

In the men’s epee events, all three first-time Olympians finished in the top 32.

Yeisser Ramirez (Brooklyn, N.Y. / Peter Westbrook Foundation) drew 2018 Senior World team bronze medalist Michele Niggeler (SUI) in the table of 64 and built a 4-1 lead after the first period which grew to 9-4. Niggeler scored twice in the second, but Ramirez closed the bout, 15-6, in the third.

“I’m still frustrated with my game, but overall, I think it was a good experience. Now I’ve gotta get ready for team event and shake it off, learn from it, from mistakes and bring all I’ve got for the team event,” Ramirez said. “We’ve been practicing a lot in New York. We feel like we have a solid chance to get a medal, so we have to focus on the things we can control only and learn from our mistakes today.”

Hoyle fenced 2016 Olympic Champion Sangyoung Park (KOR) in his opening bout with the Korean taking a 12-3 lead after the first period. Hoyle regrouped and went on a 7-2 run to cut Park’s lead to 14-10. Park took the next touch to finish the bout at 15-10 and a 24th place result.