With the win, fencing is now the most title-winning sport at Notre Dame — surpassing the 11 national championships held by the Notre Dame football team. Harvard and Columbia-Barnard finish second and third. 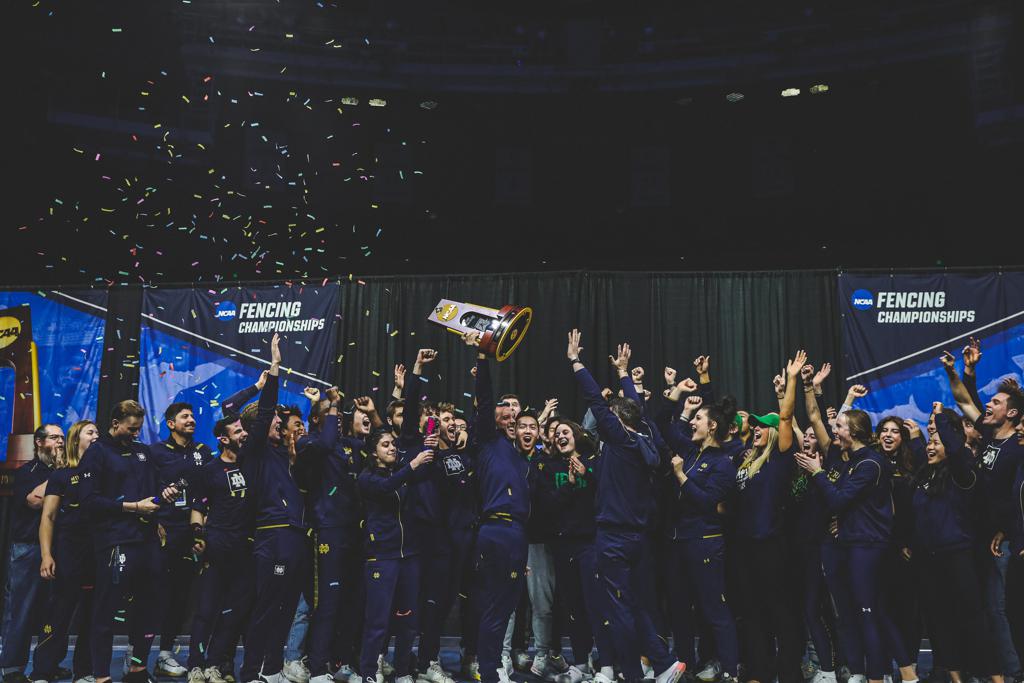 With the win, fencing is now the most title-winning sport at Notre Dame — surpassing the 11 national championships held by the Notre Dame football team.

This championship marks the fourth title for Gia Kvaratskhelia as head coach for Notre Dame, which had 11 top-eight finishes to go along with its team title.

Six individual titles were also on the line at the NCAA Fencing Championships.

Kaylin Hsieh was able to overcome last year’s 1-point defeat in the gold medal bout to win the 2022 women's epee title. The semifinals were a rematch of that championship bout from a year ago. This time, Hsieh defeated Long Island’s Laura Fekete to advance to the finals. In the gold medal bout, Hsieh faced Harvard freshman and former U.S. Cadet World Team member Emily Vermeule. Hsieh controlled the bout from beginning to end to win her first national title.

Freshman Gabriel Feinberg continued the Ohio State dominance in men’s epee. The last three times Ohio State has competed at the NCAA Championships, the Buckeyes have won the men’s epee individual title. Feinberg was able to upset top-seeded Ian Sanders of New York University, 15-14, to advance to the finals. Feinberg faced former Junior World Team member Nicholas Lawson of Princeton in the finals. Feinberg was able to keep the Ohio State dominance going with a 15-11 victory.

Freshman Maia Weintraub from Princeton took her momentum from the international circuit and was able to come away with her first NCAA title. In the semifinals, she faced 2019 individual and team champion Sylvie Binder of Columbia-Barnard. After a 15-9 victory, Weintraub advanced to the gold medal bout against Amita Berthier of Notre Dame. Weintraub controlled the bout from the start. Even after a small comeback from Berthier, Weintraub was able to finish the bout at 15-9 to win the title for Princeton.

Columbia-Barnard’s Ashton Daniel needed two 15-14 victories to win his first individual title. In the semifinals, he faced two-time Olympian Mohamed Hamza of Princeton. It would be an all-Columbia-Barnard final as Daniel fenced former Junior World Medalist and All-American Sidarth Kumbla in the finals. Daniel took a big lead early, but Kumbla did not back down. After being down 14-11, Kumbla tied it as 14-14. However, Daniel would not allow that title to be taken away and was able to score his 15th touch to win his first individual title.

Elizabeth Tartakovsky of Harvard lost in the semifinals in her last appearance at the NCAA Championships. In her first bout, she faced 2018 individual champion Maia Chamberlain of Princeton. Tartakovsky denied Chamberlain a second title after a 15-13 win. In the finals, she fenced Notre Dame’s Atara Greenbaum who was looking to give Notre Dame back-to-back titles in women’s saber. Tartakovsky controlled the bout from start to win Harvard’s first individual women’s title since 2016.