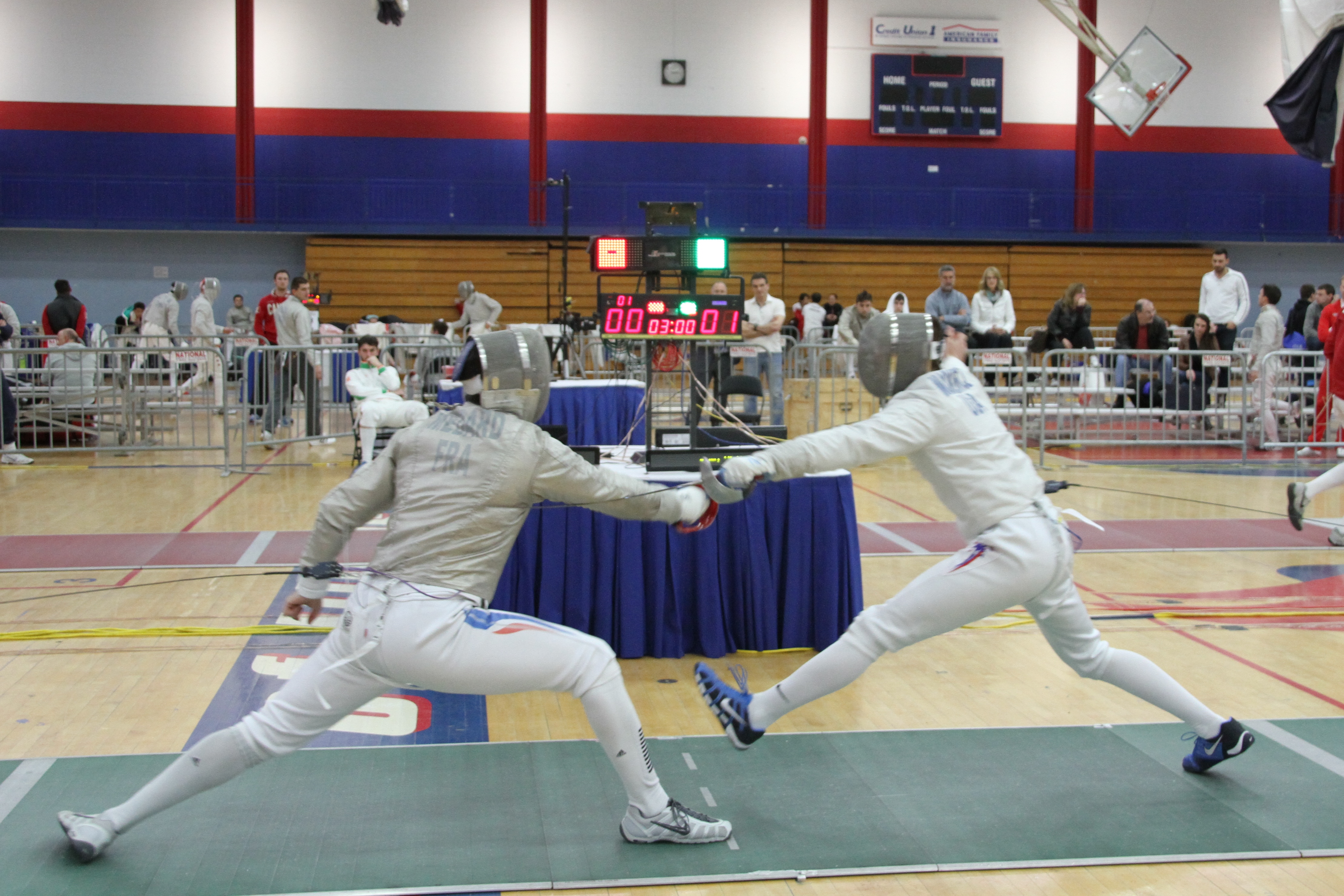 Andrew Mackiewicz (right) finished pools and won a barrage to advance to the table of 64. Photo Credit: Nicole Jomantas

(Chicago, Ill.) – Twelve U.S. women and six men will fence in the table of 64 on Saturday at the Absolute Fencing Gear® Korfanty World Cup at the University of Illinois at Chicago Flames Athletic Center.

Click here to view the complete schedule for Saturday’s events.

Muhammad’s younger sister, Faizah Muhammad (Maplewood, N.J.) finished pools on Friday as the only U.S. woman with a perfect, 6-0, record and will fence in the table of 64 as the 21st seed.

The 2013 USA Fencing Junior Olympic Champion, Claudia Kulmacz (Upper Saddle River, N.J.), earned a 5-1 result in pools and will fence as the 31st seed in the direct elimination rounds.

Fencing in the second to last qualification event for the 2014 Senior World Team, Monica Aksamit (Matawan, N.J.) continued to chase Ibtihaj Muhammad in the rankings for a chance at a position on her second senior national team. Aksamit finished 5-1 in pools and claimed the 32nd seed in the table of 64.

Six remaining U.S. women earned trips to the table of 64 through the preliminary tables.

After a 5-1 pool result, two-time Senior World medalist Daria Schneider (New York City, N.Y.) earned a bye into the preliminary table of 64 where she defeated Alekxsandra Echeverria (MEX), 15-8. Schneider’s qualification for the second day keeps her hopes for another Senior World Team alive as she sits fifth in the U.S. rankings behind Ibtihaj Muhammad.

After upsetting Schneider in the pools, junior fencer Regina O’Brien (Wellesley Hills, Mass.) finished with a 5-1 pool record and a bye into the preliminary table of 64 where she defeated junior Arabella Uhry (New York City, N.Y.), 15-11.

Loweye Diedro (Bronx, N.Y.) earned bronze at the Division I Nationals last month and continued her most successful season by qualifying for the table of 64 at her first Senior World Cup. Diedro went 4-2 in the pools and defeated cadet fencer Maia Chamberlain (Menlo Park, Calif.), 15-7, to advance to the 64.

In the men’s competition, 2012 Olympian Daryl Homer (Bronx, N.Y.) earned an exemption into the table of 64 as the 11th ranked fencer in the world.

Homer’s 2013 Senior World teammate, Eli Dershwitz (Sherborn, Mass.), went undefeated in the pools with a 6-0 result. The three-time Junior World medalist will fence as the 24th seed in the table of 64.

Dershwitz’s teammate on the squad that won bronze at the Junior Worlds in April, Andrew Mackiewicz (Westwood, Mass.), finished the pools at 5-1 and found himself in a three-way tie for the final two positions that would advance directly out of the pools and into the table of 64. Mackiewicz, Andriy Yagodka (UKR) and Julien Medard (FRA) fenced off in a round-robin barrage for the spots with Mackiewicz advancing after defeating Medard and losing to Yagodka.

A three-time Senior World team member, Ben Igoe (Staten Island, N.Y.) is seeking to stay ahead of Mackiewicz both in Chicago and in the national rankings as Igoe sits fourth in the standings in the penultimate qualifying event for the 2014 Senior World Team. After a 4-2 pool result, Igoe won his next two direct elimination bouts by 15-11 scores over Eduardo Lara (MEX) and Junmo Sung (KOR).

Jonah Shainberg (Rye, N.Y.), a 2013 Cadet World team member, qualified for the table of 64 for the second straight year at this event. Much like in 2013, Shainberg found himself in one of the final bouts of the day as he was looking to advance. After a 3-3 pool result, Shainberg won his first bout against Oleh Shturbabin (UKR), 15-11, and held on to outtouch Francois Regent (FRA), 15-14.

Visit www.sabreworldcup.com for live results throughout the day.

The semifinal and gold medal bouts will be broadcast live from Chicago at www.usfencing.org beginning at 6:30 p.m. Central time on Saturday.