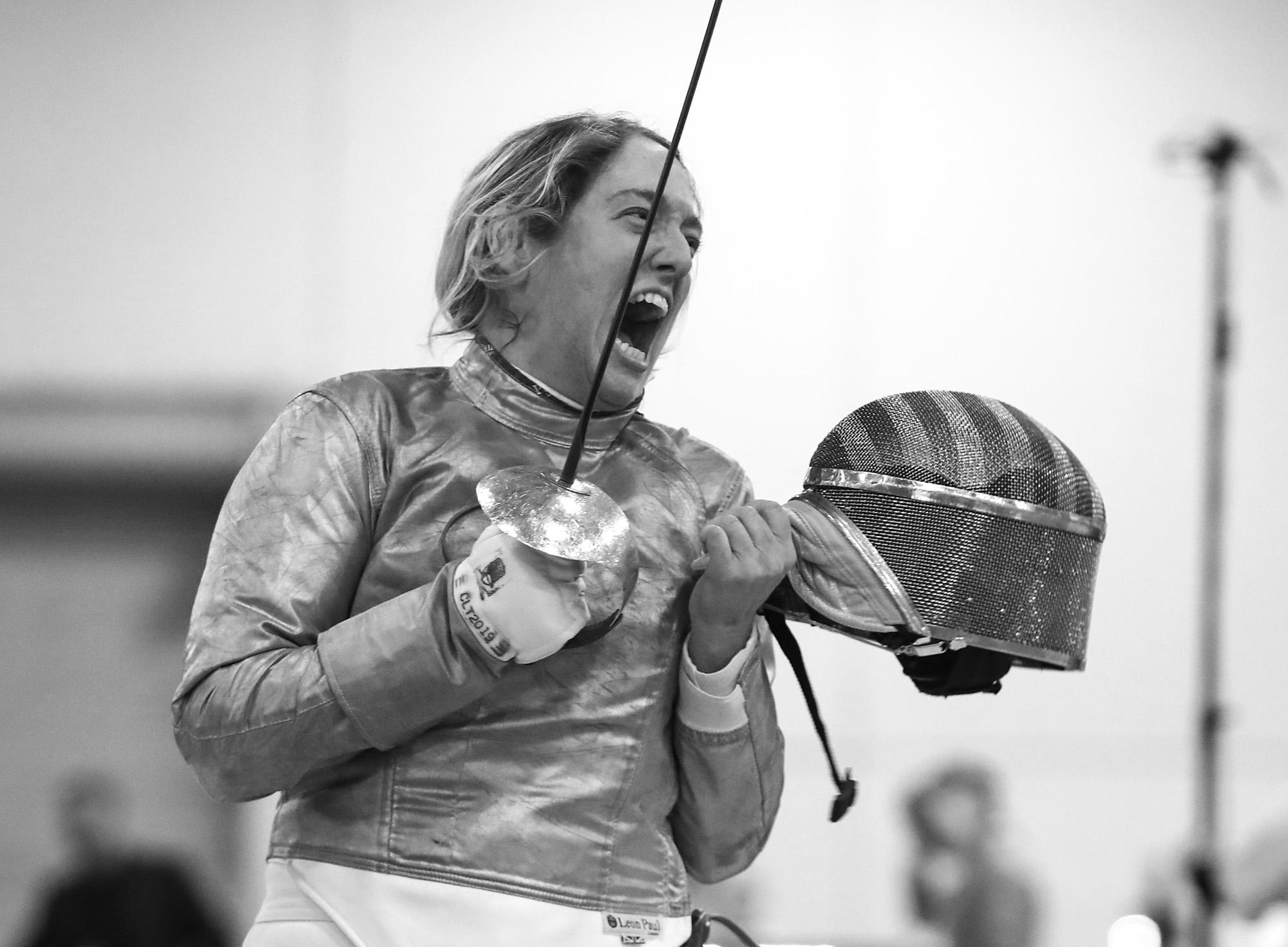 The reigning Senior World bronze medalist finished the day with a 2-1 result, fencing World medalists along the way and climbing to the No. 1 position in the newly released USA Fencing National Team Point standings along the way. Ranked No. 3 in last week’s USA Fencing National Rolling Point Standings, this marks the first time in Stone’s career that she holds the honor of being the top-ranked fencer in the United States.

Mariel Zagunis (Beaverton, Ore.), the two-time Olympic Champion who is making her return to competition after having a baby in the fall of 2017, holds the No. 2 position in the standings.

Exempt from pools as the No. 10 fencer in the world, Stone drew three-time Senior World Team Champion Dina Galiakbarova (RUS) in the table of 64 and led by a single touch at 8-7 in the second before going on a seven touch tear to win the bout, 15-7.

In the table of 32, Stone fenced the 2018 Cadet World bronze medalist Alexis Anglade (Alpharetta, Ga.). The youngest U.S. team member to make the table of 64, 17-year-old Anglade earned her first top-32 finish on the Senior World Cup circuit in Salt Lake City. In the previous bout, Anglade fenced Division I National Champion Kamali Thompson (Teaneck, N.J.) in the 64, taking an 8-6 lead in the first period before Thompson tied the score at 11. With the score tied again at 12, Anglade scored three straight for a 15-12 win.

Anglade led the bout against Stone, 12-9, in the second, but Stone put up five of the next six touches for a 14-13 lead. Anglade scored once again, tying the bout at 14. It would be Stone, however, who would take the final touch on the next exchange to win the bout, 15-14.

Stone and Vecchi exchanged the lead throughout the first period with Stone up, 8-7, going into the break. In the second, however, Vecchi pulled away at 13-10 and gave up only one touch to Stone on the way to a 15-11 victory. Vecchi went on to win her next bout as well, defeating two-time Junior World medalist Liza Pusztai (HUN), 15-14, to secure bronze.

“I think I did my job to some extent. I wish I could have done more. It was a good step forward, but I can always do better,” Stone said. “I know what I did wrong in the last bout. It was a tactical issue and I understand it and now how to improve it in my practice going into the next World Cup.”

Stone also noted that she enjoyed the support she received from the crowd in the rare experience of fencing on the circuit in front of a U.S. audience.

“There were so many Americans cheering for us. I felt like I really had to represent to some extent,” Stone said. “There was a little bit of pressure, but I loved the support and hearing everybody yelling while I was out there was awesome.”

Along with Anglade, Wozniak was one of four U.S. fencers to earn top-32 results.

Exempt from pools as the No. 9 fencer in the world, Wozniak fenced teammate Maia Chamberlain (Menlo Park, Calif.) in the table of 64 and led the bout at 8-7 before Chamberlain whipped off four straight touches to take a 12-8 lead. Wozniak regrouped, going on a 7-1 run to end the bout with a 15-13 victory.

A four-time Olympian for Poland, Aleksandra Shelton (Tigard, Ore.) competed as a U.S. team member after changing her citizenship to the United States.

In her table of 64 bout, 2017 Pan American Team Champion Francesca Russo (Wayne, N.J.) jumped out to a 7-2 lead in the first. Shelton countered with two touches before Russo closed the period at 8-4.  Touch by touch, Shelton clawed her way back into the bout, tying the score at 11 and pulling away at 14-13. On the final touch, Russo was awarded a score to tie the bout, but Shelton requested video review and received the reversal for a 15-14 win.

Shelton’s next opponent, 2018 Senior World Champion Sofia Pozdniakova (RUS), went on a 6-1 run in the first period to take an 8-3 lead. Shelton couldn’t close the gap in the second and Pozdniakova went on to earn the win, 15-9.

Columbia freshman Daniella Timofeyev (Antelope Valley, Calif.) earned her first top-32 finish on the Senior World Cup circuit. The 18-year-old took an 8-6 lead over Hengyu Yang (CHN) in the table of 64 and needed just two at 13-10 to close the bout when Yang scored four of the next five to tie the bout at 14. Timofeyev would clinch the win on the final touch to advance to the 32 at 15-14.

World No. 3 Anna Marton (HUN) came out aggressively against Timofeyev in the 32, taking a 5-1 lead to open the bout and ending the first at 8-5. Marton finished the second period at 15-11 and went on to win silver.

Zagunis fenced 2018 Junior World Champion Olga Nikitina (RUS) in the 64 with the Russian opening at a 5-1 lead. Zagunis came back to tie the score at six and Nikitina ended the period with an 8-7 lead. Zagunis tied the score again, but Nikitina picked up five straight en route to winning the bout, 15-9.

Aksamit, a bronze medalist alongside Zagunis and Wozniak in Rio, held an 8-7 lead after the first period of her bout against 2017 Junior World silver medalist Theodora Gkountoura (GRE). Although Aksamit led the bout, 12-9, in the second Gkountoura fought back to tie the score at 14 and take the winning touch, 15-14.

With the scored tied at eight between Fox-Gitomer, a 2018 Senior World Team member, and Anna Limbach (GER), the German reeled off six straight to pull away and ended the bout with a 15-9 victory.

Johnson, Tartakovsky and Fox-Gitomer’s 2018 Junior World teammate, fenced fifth seed Bianca Pascu (ROU) in the 64. While Johnson held an 8-7 lead at the break, Pascu outscored the American, 8-3, in the second for a 15-11 win.

Fencing at her first World Cup since winning silver at the Beijing Olympic Games, Bâby drew World No. 4 Cecilia Berder (FRA) in the 64. In the first period, Bâby struggled to adapt to the game of Berder as the seven-time Senior World medalist burst out with a 6-1 lead and finished the period at 8-4. Bâby scored three in the second as Berder closed out 15-7 and went on to win her second World Cup title in the United States in the last three years.

With 14 U.S. fencers competing in the top 64, the results on Saturday caused significant movement in the USA Fencing National Team Point Standings. With the Senior World Team to be named at the end of April, Stone and Zagunis are followed in the first and second positions by Fox-Gitomer in third and Wozniak in fourth. Aksamit and Russo are separated by less than 100 points in fifth and sixth with fewer than 80 points separating Johnson, Thompson and Shelton in seventh, eighth and ninth.

In the Junior National Team Point Standings, Fox-Gitomer and Johnson remain No. 1 and 2 with Nora Burke (New York City, N.Y.) in third. Anglade climbed from fifth to fourth with her top-32 result as she seeks a position on her first Junior World Team. Ryan Jenkins (San Juan Capistrano, Calif.), a member of the 2018 Cadet World Team with Anglade holds the No. 5 position, followed by Tartakovsky and Timofeyev in sixth and seventh.

Top eight and U.S. results are as follows, including athletes who were eliminated prior to the table of 64 during Friday’s preliminary rounds.