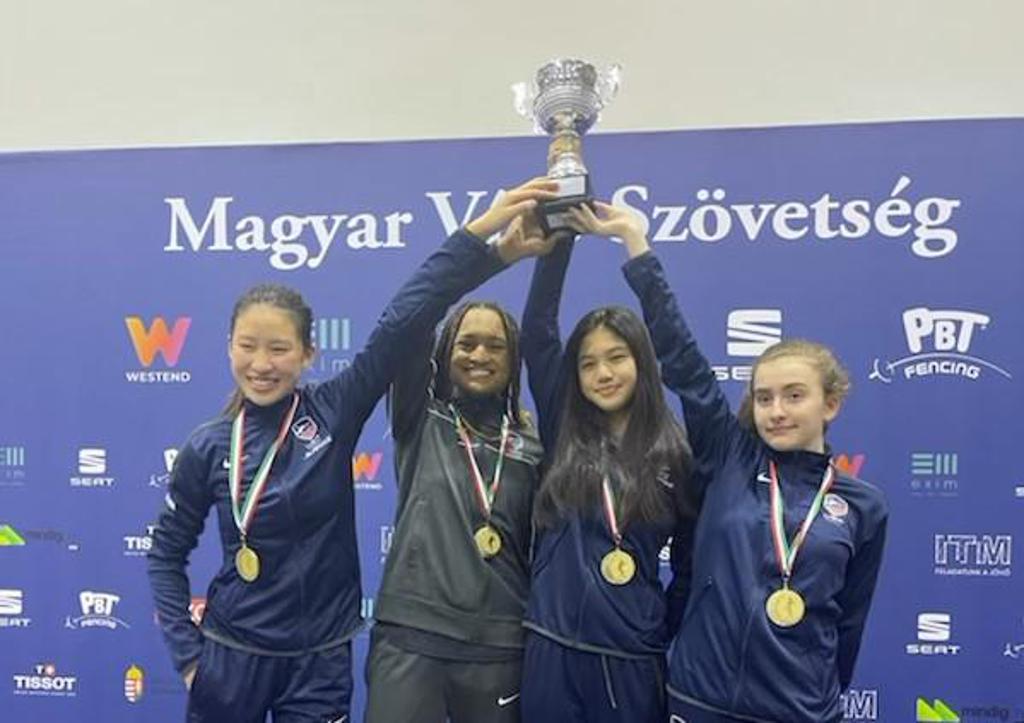 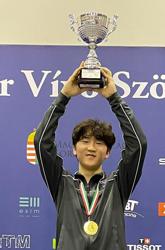 (Colorado Springs, Colo.) – Team USA medaled in every event at the Budapest Cadet European Cup this past weekend, winning a total of six medals, including two golds.

Competing at just his second Cadet European Cup, Kim cinched the gold by going 5-1 in pools and 8-0 in the direct elimination rounds.

In the table of 16, Kim overcame Federico Greganti (ITA), 15-12, before securing a medal by controlling his quarterfinal about against teammate Mitchell Huth (Raleigh, N.C. / Apex Fencing Academy), 15-5.

Kim’s closest bout came in the semifinals against Dmitrii Chashchin (RUS) with Kim coming out on top, 15-13. Fencing for gold, Kim’s momentum continued as he secured the gold, 15-9, over Pavel Puzankov (RUS), and moved up to first place in the USA Fencing Rolling Point Standings.

The United States didn’t drop a bout in the table of 64, besting Poland 4, 45-24, with Jeon, Graham and Yang all tallying a +7 indicator. In the following round, Team USA faced a 10-8 deficit to Italy 4 after two rounds, but the Americans won or tied the next six bouts to win, 45-36.

In the table of 16, the United States jumped out to a 20-7 lead against Poland and won or tied all nine bouts to advance to the quarterfinals, 45-30.

Once again playing from behind, USA 4 lost its first three bouts of the semifinals and although the squad closed the gap to two at the end of the fifth and seventh, Russia 3 held on, 45-43.

With a medal on the line, the Americans came out strong against Italy, taking a 20-12 lead after four bouts. Only dropping one bout the entire match, Team USA clinched the bronze, 45-32.

In its opening match in the 32, USA 1 didn’t drop a bout, blazing past Moldova, 45-18. Leslie led all members of Team USA +10 indicator. The next round saw the United States win every bout with all three members tallying an indicator of +9 or better to best Poland, 45-14.

Behind Chusid’s +11 effort in the semifinals against Turkey, Team USA won eight of the nine bouts and advanced to the gold medal match, 45-20.

To reach the medal rounds, USA 3 also had to face another USA squad in USA 2, which was composed of Arianna Cao (San Jose, Calif. / Massialas Foundation), Brianna Ho (Denville, N.J. / V Fencing Club), Katerina Lung (Lexington, Mass. / Moe Fencing Club) and Sophia Shen (Lexington, Mass. / Star Fencing Academy), who finished sixth in the individual event. USA 3 took a lead early by taking the first six bouts, 30-16, and despite USA 2 winning or tied the final three bouts, the deficit was too much and USA 3 won, 45-39. Oh led USA 3 with a +8 indicator.

Similar to the quarters, USA 3 got off to a strong start in the semifinals against Great Britain 1, building a 20-11 lead, which the team would sustain to reach the final, 45-36.

In the women’s individual event, Jing and Leslie won their first individual medals internationally with silver and bronze.

To advance to the final, the 14-year-old would need two clutch victories as she outtouched 2021 Junior World Team member Sabrina Fang (CAN) and Leslie, 15-14.

With their podium finishes, Leslie and Jing moved up to No. 2 and 3 in the Rolling Point Standings.