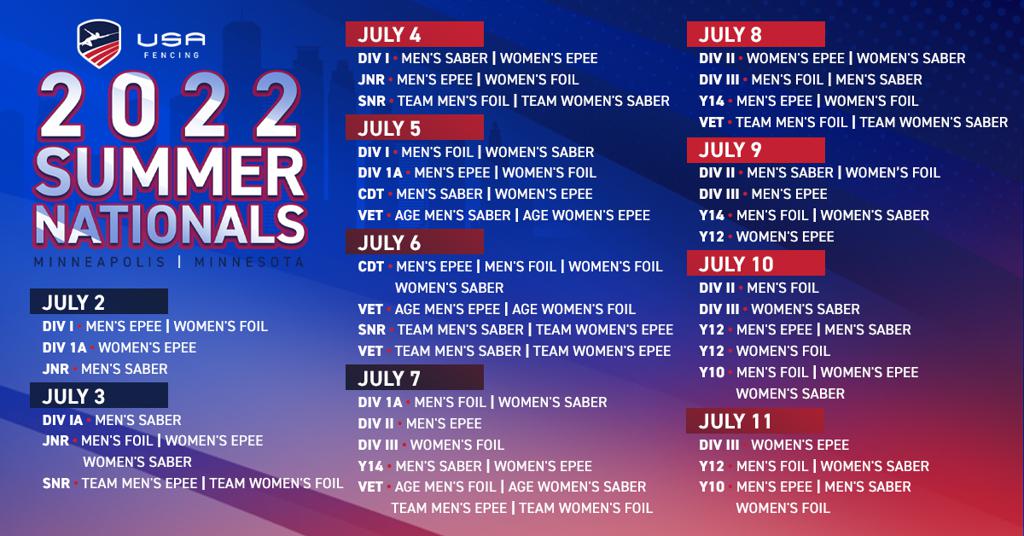 (Colorado Springs, Colo.) – USA Fencing is pleased to announce the release of the day schedule for the 2022 USA Fencing National Championships and July Challenge which will be held from July 2-11 at the Minneapolis Convention Center in Minneapolis, MN.

The tournament will include National Championships in the following categories:

In addition, the tournament will include non-Championship events as a part of the July Challenge for the following categories:

As a reminder, athletes competing in the Senior and Veteran Team events do not have to represent the same club, as the events are not championships.

Late Entry Deadline: 5 p.m. EDT on the day prior the start of each event

In exceptional cases, subject to approval by the USA Fencing Board of Directors or National Office, a member of USA Fencing in good standing may be permitted to qualify to the Division I Championships, Junior Olympic Fencing Championships, the July Challenge or the USA Fencing National Championships by petition. No petition may contravene the results of a qualifying competition – a fencer who has fenced in the qualifying competition without withdrawing due to a disabling injury or illness cannot then petition to disregard or override those results. Petitions will be denied for fencers who chose to fence in a regional qualifier (RYC, SYC, RJCC, and ROC) over their division qualifier. U.S. citizens and Permanent Residents are eligible to petition.

The following criteria and procedures are applicable to filling a petition:

A petition may be filed by a fencer who qualified (by means of competition or petition) to that same competition in the prior season or whose recent competitive record indicates a strong possibility that the athlete would have qualified had they been able to compete in the qualifying competition but:

(Note: Athletes who attend a school or university in the United States, outside of their division, shall not constitute inability to compete)

All petitions must be made through an online system to USA Fencing National Events; the petition link is available through the specific tournament page on www.usafencing.org. Under no circumstances will petitions be accepted if received after the late fee entry deadline for the Championships.

The petition must be accompanied by:

See the Qualification and Eligibility Charts at the links below for information on how fencers may qualify for the various events for the National Championships and July Challenge. For the Y14, Division II and Division III categories, fencers may qualify by placing in the top 25% of Division Qualifier tournaments if not already qualified by points. Please note these criteria are in addition to any of the eligibility criteria necessary to compete in an event.

For more details on qualifying for events, Chapter 2 of the Athlete Handbook may also be consulted.