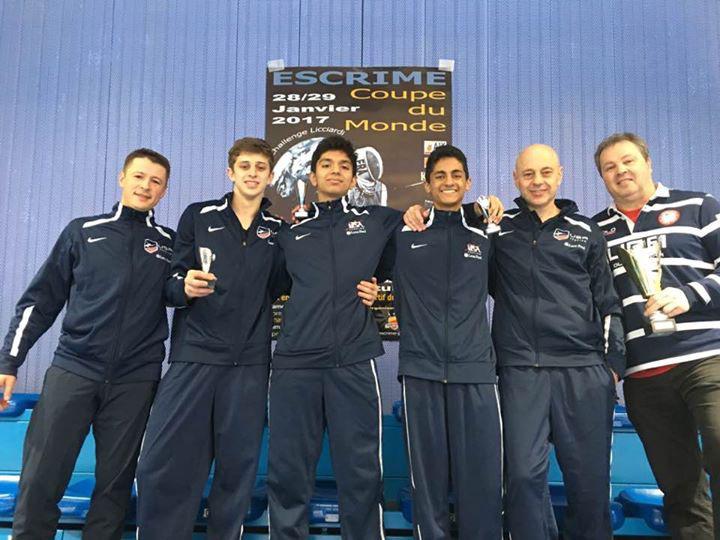 Itkin’s second career Junior World Cup medal moved him into second in the Junior National Team Point Standings and guarantees him a spot on the Junior World Championship Team. In fact, after this weekend’s event, all four members who will compete in Bulgaria have been decided. Geoffrey Tourette (Cupertino, Calif.), the reigning Cadet World Champion, remained atop the standings while 2015 Cadet World Champion Sam Moelis (Hewlett, N.Y.) secured a position as the No. 3 fencer in the standings. Sidarth Kumbla (San Jose, Calif.) will be the fourth member of Team USA. All four athletes are past Cadet World Team members with Moelis and Tourette having competed on the Junior World Team in 2015 and 2016, respectively.

After completing pools with a 5-1 record, Itkin cruised to a 15-4 victory over Gustavo Alarcon (CHI) in the table of 128. In the next two rounds, the 2016 Cadet World Team member overcame two Hungarians, defeating Gabor Bellovicz, 15-13, and Tamas Mendrey, 15-6. With a 15-6 win over Enguerand Roger (FRA), Itkin advanced to the quarter-finals, where he edged out Alexandre Ediri (FRA), 15-13.

Itkin dominated his semifinal bout, giving up just one touch to Takuma Ito (JPN) for a 15-1 win. The final would be much closer with the gold medal decided by just one touch. Ultimately, Itkin fell short to the No. 3 fencer in the junior world rankings, Iskander Akhmetov (RUS), who earned his second title in the last three Junior World Cups.

Finishing 17th in France, Tourette earned a spot on his second Junior World Team. The two-time Cadet World medalist entered the direct elimination rounds as the top-seeded fencer, going 6-0 in pools. He then defeated Max Tiemann (GER), 15-7, and Andrzej Rzadkowski (POL), 15-12, to reach the 32, but was upset by Ludwik De Bazelaire (POL), 15-12.

Team USA’s top-ranked fencer in the Junior World Rankings at No. 9 after his bronze at the last World Cup in London, Kumbla also earned a top-32 result. He started the direct elimination rounds with a 15-10 victory over Maxim Valeur (DEN) in the table of 128 and outscored teammate Michael Li (Palo Alto, Calif.) in the 64, 15-13. However, in the 32 Kumbla was out-touched by Ediri, falling 15-14.

Bravo and Cheng were both eliminated by bronze medalist Grigoriy Semenyuk (RUS) in the 64 and 32, respectively. At his first international junior tournament, Zheng won his first two bouts by 15-6 and 15-10 scores, but lost to Mohamed Hamza (EGY), 15-9, in the 32 to take 23rd.

On Sunday, Itkin, Tourette and Kumbla claimed the silver medal in the team competition and the U.S. maintained its No. 1 ranking.

As the top seed, the Americans earned a bye into the table of 16 where they didn’t lose a single bout and defeated Australia, 45-20.

In the quarters against Poland, Itkin posted a +12 indicator, twice overcoming a deficit to give Team USA the lead. With Poland leading the match, 8-7, Itkin won his third bout, 8-4, and later took his fifth bout, 6-0, to give the U.S. a 25-20 lead. With the momentum swinging their way, the Americans won their final four bouts for a 45-29 victory.

The semifinals saw Team USA come from behind to hold off Russia, 45-43. Trailing the entire match, the U.S. faced a 35-30 deficit with two bouts to go and two medalists from the individual competition up for Russia. Itkin earned revenge against his opponent in the gold medal final, overcoming Akhmetov, 9-5, to cut the deficit to one at 40-39. Anchoring for the United States, Tourette completed the comeback, defeating Semenyuk, 6-3.

After falling behind from the beginning against Japan in the final, the Americans hoped for a similar comeback, but dropped the match 45-30.