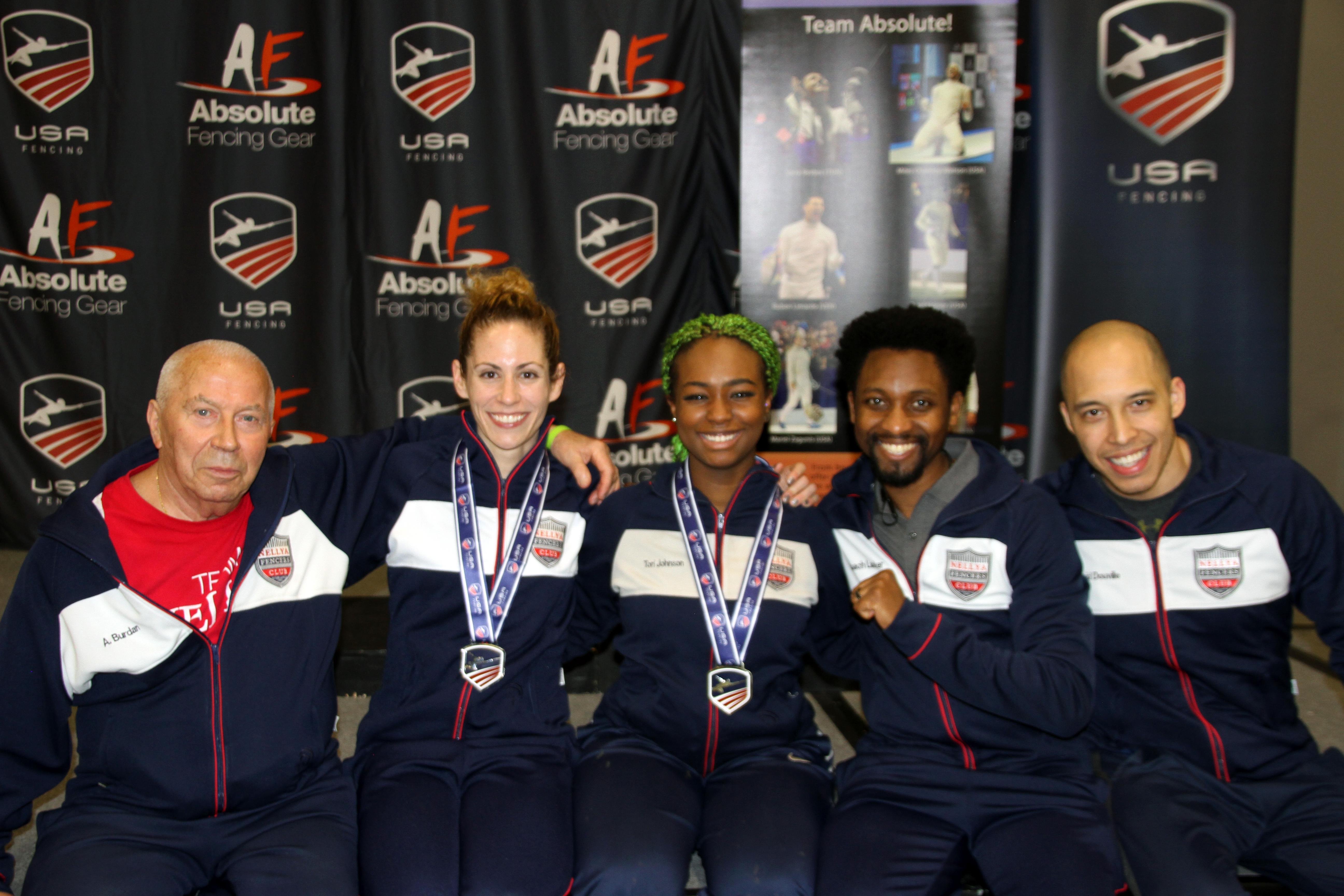 When Atlanta native Sada Jacobson walked away from the sport in 2008, she did so as one of the most decorated fencers in the United States at the age of 25.

Following her retirement, the two-time NCAA Champion for Yale married Penn State epee fencer Brendan Bâby, completed law school at the University of Michigan and went on to become the mother of two sons – Henry and Jack.

Last summer, however, Sada Jacobson, now Sada Bâby, walked back into Nellya Fencing Club with a saber in hand for the first time in 10 years.

The club she grew up in and the sport she dedicated half of her life to would become a comforting haven for Bâby whose family was coming to grips with her mother, Tina Jacobson’s cancer diagnosis.

“I have been telling everybody that I missed the sport, but, honestly, my mom got sick last year and she was very ill for a long time and my sisters and I kind of put our lives on hold to take care of her,” Bâby said. “And, in the midst of all that, it felt like everything was turned upside down and I just felt like I wanted to come back to fencing as something that was familiar, something I knew and I just enjoyed it.”

Not only did Bâby return to her home club, but also to Arkady Burdan who coached Bâby at the 2004 and 2008 Olympic Games where she won individual bronze and silver, respectively, as well as team bronze in 2008.

“It is at once exactly the same and completely different. In some respects, it just feels like riding a bike,” she said. “You’re going to practice at the same place and it’s kind of the same routine. The warmup is the same, the lessons are the same, but I’m 10 years older.”

Although the Jacobson family matriarch passed away in October, Sada continued to fence and soon registered for the December North American Cup in Cincinnati.

In January, Bâby returned to the NAC circuit in Charlotte and this time brought home hardware – a silver medal – and a string of wins that included 15-13 defeats over 2017 Pan American Team Champion Francesca Russo and 2018 Senior World bronze medalist Eliza Stone. In the finals, Bâby missed gold by two touches with a 15-13 loss to Johnson.

Equally important as her result, however, Bâby said she enjoyed the experience of reconnecting with the fencing family and the friendship and support she felt in Charlotte.

“It was so much fun being back at the last couple of NACs. I was really surprised by the number of people I knew who were still doing it 10 years later. And there’s a lot of people I knew as athletes who have now transitioned to being coaches and referees. It was just really fun to reconnect with people,” she said. “That’s really one of the big reasons I wanted to come back and start competing again is to be part of that community again.”

With her podium finish, Bâby moved into the top 20 in the USA Fencing Senior National Rolling Point Standings and became eligible to fence as a member of the 30-person U.S. delegation at the Absolute Fencing Gear® Salt Lake City Women’s Saber World Cup this weekend.

Throughout the NAC, Bâby was peppered with questions by fencing friends about whether she was making a comeback and whether she’d be returning to the World Cup circuit.

“They kept asking if I was going to do any international tournaments and I kept saying ‘No no no. I’m only doing NACs. This is only just for fun,” she said.

But then she got home and was inspired to make the jump.

“I had a good result in Charlotte and I immediately came home and signed up for the World Cup,” Bâby laughed. “I enjoyed feeling like I was fencing well and I just wanted another chance to compete. It was a total impulse decision. I don’t know what I was thinking!”

While she is looking forward to her World Cup return in Salt Lake City, Bâby remains cautious about the transition to fencing the best in the world again.

“We will see what happens. I’m not sure I feel quite ready for this tournament, but it’s going to be fun regardless. Saber is so different. The timing has totally changed. It’s totally changed the whole game in the last 10 years,” she said. “It’s really been a process of relearning things and trying to break some old habits of things that used to work for me, but no longer do the way that touches are called these days. That’s an ongoing process. I don’t think I’m quite there yet, but I feel like I’m starting to kind of get it. It’s a fun challenge to try and change my game to meet the new requirements of the sport.”

Now 35 years old and with new responsibilities, Bâby practices just 3-4 times a week, but says she prefers her new regime to the grind of training full-time as an Olympian.

“I’m training a lot less than I did the last time around. I go into the club three or four days a week and I really like it that way. It kind of keeps everything fresh,” she said. “It’s just a lot more fun than the type of training I was doing when I was trying to make an Olympic Team. It’s just been a really fun experience this time around.”

The question remains … will she make an Olympic run?

Bâby is quick to clarify that she has no plans to return to the World Cup circuit.

“I do feel like I’ve had my moment. I made the teams that I wanted to make. I did what I wanted to do in terms of competing at an elite level and now it’s just about enjoying being part of the sport,” she said.

But being competitive doesn’t go away with retirement and Bâby is seeking to find the balance between the hard work and desire that made her a champion and her wish to enjoy the sport again in a new ay.

“I’m trying to balance out the two sides. On the one hand, it is for fun. I’m trying to do this in a recreational way, for the fun of it,” Bâby pondered. “And at the same time, I’m a pretty competitive person and when I go to a tournament I want to win it. So the side that I’m trying to have win the day is the fun side.”

For now, Bâby is taking her return, day by day and bout by bout.