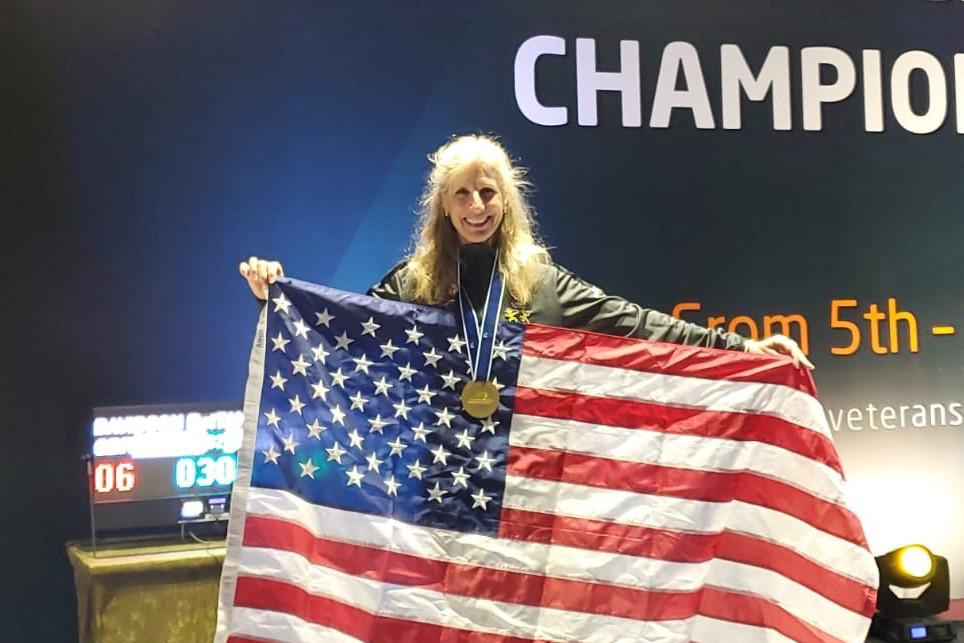 A four-time individual Vet World medalist in the 50-59 competition – and the world champion in 2015 – Fabry clinched her first gold in the 60-69 age category. She was joined on the podium by Team USA’s most decorated veteran fencer, seven-time individual Veteran World Champion Jane Eyre (Woolwich Township, N.J.), who has now claimed a medal at every Vet Worlds since 2013 with her bronze medal finish in Cairo.

Fabry went undefeated on the day, going 6-0 in pools and 4-0 in the direct elimination rounds. As the only athlete to go undefeated in pools, Fabry earned the No. 1 seed and a bye to the table of 16, where she defeated 2018 Vet World Team Champion Margherita Camerin (ITA), 10-6.

Entering as the reigning World Champion, Eyre went 5-1 in pools before edging out 2017 Vet World bronze medalist Claudia Bandieri (ITA), 10-8, in the 16. A 10-7 victory over 2018 Vet World Team Champion Maria Teresa Conconi (ITA) ensured Eyre a medal every year she’s competed in the 60-69 age category, but in the semifinals, she came up short to Du, 10-8.

A seven-time individual Vet World medalist, including a two-time medalist in saber, Starks-Faulkner overcame 2018 Vet World bronze medalist Yoshiko Chikubu (JPN), 10-6, but lost in the quarter-finals by the same score to Zini.

Seven-time Vet World Team member Runyan posted a 10-4 victory over four-time individual Vet World medalist Patricia Reguigne (FRA) and a 10-8 win over Grace Born (CAN) to reach the quarters before coming up one win shy of a medal with a 10-4 loss to Du.

Team USA also had two podium finishers in the +70 men’s saber competition with Brown and Sbarbaro taking silver and bronze.

At his first Vet Worlds, Brown had close bouts throughout the day. After going 3-2 in pools, he edged out two Japanese fencers: Takemi Miyasaka, 10-8, and 2018 Vet World bronze medalist Koh Yamada, 10-9.

Brown followed up a 10-6 victory over Michael Compton (GBR) in the quarter-finals with a 10-4 win over Bernard Aussedat (FRA) to advance to the gold medal final. However, facing the reigning world champion in Riccardo Carmina (ITA), Brown was outtouched for gold, 10-9.

Carmina also defeated Sbarbaro in the semifinals by a 10-4 result, ending his most successful day of individual fencing at Vet Worlds. Sbarbaro went 5-0 in pools to take the No. 3 seed and nearly earned the sweep in the table of 32 with a 10-1 effort over Jerzy Pregowski (POL), who was coming off a 10-2 win against four-time Vet world team medalist Vic Bianchini (San Diego, Calif.) in the table of 32.

With a bye to the table of 16, Pernice outscored Anne Laure Barbier (FRA), 10-6, to set up a bout with teammate Barbara Shinn-Cunningham (Pittsburgh, Pa.) in the quarter-finals.

Competing at her first Worlds, Shinn-Cunningham picked up two quick 10-3 victories over Claudia Mayer (BRA) and Friederike Janshen (GER), who entered the competition having won five of the last eight 50-59 women’s saber titles.

Pernice overcame Shinn-Cunningham, 10-4, to clinch the bronze, but lost 10-5 in the semis to Dorothea Tanzmeister (AUT). Tanzmeister went on to win gold, her second in a row.

Like Shinn-Cunningham, Eileen Foley (Arvada, Colo.) secured a top-eight result at her first Vet Worlds. Foley edged out Ulrike Fuhrmann (POL), 10-7, and Concetta Talamo (ITA), 10-9, to advance to the quarter-finals, where she lost to Tanzmeister, 10-5.

In the veteran women’s +70 saber competition, Channing went 2-2 in pools before holding off teammate and 10-time Vet World medalist Ellen O’Leary (Seattle, Wash.), 10-8, in the table of 16.

Channing will return to competition on Thursday in the +70 women’s épée event.

The bronze medalist last year, Anna Mannino (Oceanside, Calif.) started the day strong, taking the No. 2 seed out of pools. She then outscored Annegret Hamann (GER), 10-8, but fell short of a return to the podium with a 10-0 loss to Brigitte Greunke (GER).