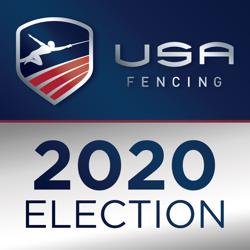 The USA Fencing Nominating Committee is pleased to announce the names of the parties that it has nominated to run for election to the positions indicated.

President (One to be Elected)
Donald Anthony Jr. (Columbus, Ohio)

Treasurer (One to be Elected)
David Arias (Birmingham, Ala.)

NOTE: Other candidates may be nominated for these positions. The Bylaws describe the requirements for nomination by petition.

Congratulations to the nominees, and many thanks to all who submitted applications and participated in the process. The determination was based on a number of factors, demonstrated understanding of the role sought; past officer, board of director and committee experience; as well, demonstrated business acumen and familiarity with the workings of the U.S. Olympic and Paralympic Committee, FIE and USA Fencing.

The Nominating Committee will be submitting an official report in the coming weeks to the USA Fencing Board of Directors.

The process now moves to the Election Committee which will be establishing the timing of the election this spring; the rules for the posting of electioneering materials on the website; and the method of balloting. Details will be communicated via email and posted on http://www.usafencing.org as they become available.