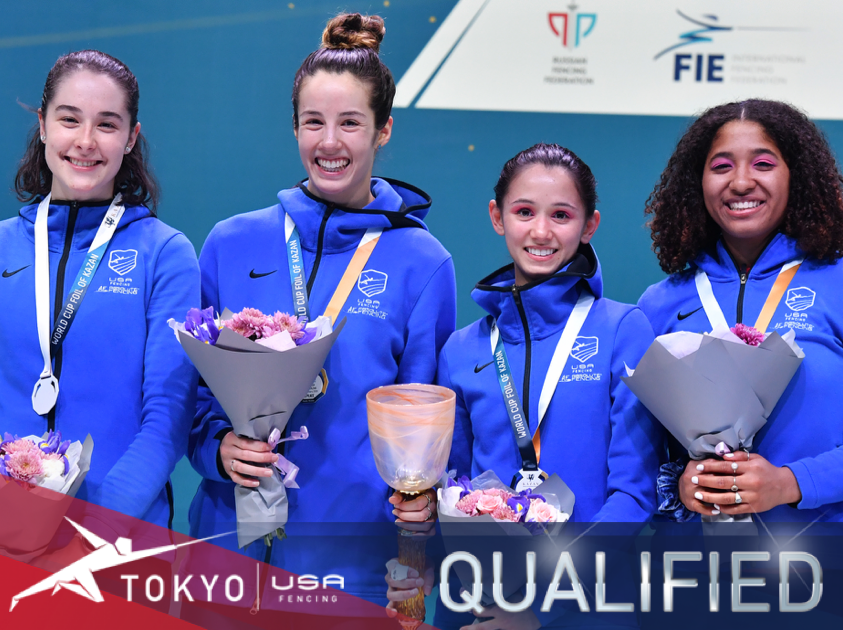 (Colorado Springs, Colo.) – The U.S. Women’s Foil Team ended the Tokyo Olympic qualification period with not only a berth to the Tokyo Olympic Games, but a silver medal finish at the Kazan World Cup in Russia – the third podium finish on the circuit in the last year for Team USA who won bronze at the 2019 Senior Worlds and gold at the 2019 Pan American Championships.

The win showed the depth of the women’s foil program as two-time Olympian Lee Kiefer (Lexington, Ky.) was joined in the team event by three members of the squad who are each vying to compete at the Olympic Games for the first time in Tokyo: Jackie Dubrovich (Riverdale, N.J.), Iman Blow (Brooklyn, N.Y.) and Sabrina Massialas (San Francisco, Calif.)

After a 45-25 win over Egypt in the table of 16, Team USA fenced a close bout against Japan in the quarter-finals. Leading by one after the eighth bout at 37-36, Kiefer blazed through the anchor leg, besting Sera Azuma, 8-1, to win the match, 45-37.

In the semifinals, Team USA fenced Poland – a squad that upset World No. 1 Russia in the previous rounds and was fighting to keep its Olympic hopes alive in Russia as the team needed a podium finish to secure a berth to Tokyo. Team USA led by two after the first two rotations at 29-27, but Blow and Dubrovich each won their next bouts, posting +1 and +4 indicators, respectively to give Kiefer a seven-point cushion going into the final bout. Kiefer ended the match quickly, outscoring Julia Walczyk, 5-3, for a 45-36 victory.

Team USA fenced Italy, the 2019 Senior World silver medalists, in the finals with Kiefer, Massialas and Dubrovich in the lineup. Kiefer and Dubrovich kept the match close at the start with a tie at seven after the second and Massialas scored a 3-2 win over former Olympic and World Champion Elisa Di Francisca in the fifth, but the Americans couldn’t catch Italy who won gold, 45-27.

With the Olympic qualification period complete, Team USA ended the period ranked fourth behind Russia, Italy and France – a position which guaranteed that the Americas Zone will send two teams to the Games. Team USA qualified as one of the top-four teams in the world with Canada finishing as the highest-ranked team in the zone outside of the top four at sixth. Japan earned the Asian qualification with Egypt remaining in the top 16 to take the African qualification. Hungary held on to the European qualification after a sixth-place finish in Kazan and a loss by Poland to France in the bronze medal final, 45-41.

Seventeen-year-old Maia Weintraub (Philadelphia, Pa.) also put herself in contention to become one of Team USA’s youngest Olympians in the sport of fencing with a top-16 result in Kazan.

Ross, who was exempt from pools with a top-16 world ranking, drew Erica Cipressa (ITA), a two-time World Cup medalist and 2019 World University Games Champion in the first round. With the score tied at six after the first two minutes, the two combined for seven touches in the final minute of the first period with Cipressa holding a 10-9 lead. Both fencers kept a quick pace in the second with Ross coming away from a tie at 12 to score three unanswered touches and end the bout less than a minute into the second at 15-12.

In the 32, 2017 Torino Grand Prix bronze medalist Valentina De Costanzo (ITA) led the bout, 14-11, in the second period when Ross came back with five straight touches to steal the win, 15-14.

Fencing her third Italian of the day, Ross came up against 2018 Senior World Champion Alice Volpi in the 16 and kept the bout at a tie in the first before Volpi went on to close the win at 15-8 in the second. The World No. 2 would end the day with a bronze medal – her third international medal of the season.

With her finish, Ross remains No. 3 in the National Team Point Standings behind Kiefer and Dubrovich with Massialas in fourth, followed by Weintraub in fifth and Blow in sixth.

A member of the 2019 Cadet World Team who recently qualified for the 2020 Junior World squad, Weintraub went 4-2 in the pool rounds on Friday and defeated Andrea Breteau (ESP), 15-6, to make the 64 on Saturday.

In the 64, Weintraub pulled away from World No. 9 Sera Azuma, scoring five straight touches to end the bout, 15-10.

In the 16, it was Yue Shi (CHN) who put up the closing run, outscoring Weintraub, 6-1, for 15-10 win in the third period before going on to win the silver medal.

Now ranked No. 5 in the National Team Point Standings, Weintraub is in the midst of a race of less than 100 points between herself, Massialas and Blow for the No. 4 position in the standings.

Each of the three fencers needs at least a top-32 finish at the Absolute Fencing Gear® FIE Grand Prix Anaheim on March 13 in order to change the order of the standings.

Kiefer and Dubrovich each earned top-32 finishes in Kazan to retain their positions as No. 1 and 2 in the National Team Point Standings with Kiefer having already secured her position on the 2020 U.S. Olympic Team with four podium finishes on the World Cup circuit during the qualifying period.

Kiefer opened her first bout against Coralie Brot (FRA) with an 11-5 lead after the first period and gave up just two touches in the second to end at 15-11.

Dubrovich retained her position as No. 2 in the National Point Standings with a top-32 result in Kazan. The four-time Junior World medalist dropped just one bout in pools and advanced to the 64 as the No. 32 seed.

In her opening direct elimination bout, Dubrovich was tied at eight with Sumire Tsuji (JPN) going into the final minute of the third period, but quickly reeled off seven straight touches for a 15-8 victory.

Fencing 2016 Olympic Champion Inna Deriglazova (RUS) in the 32, Dubrovich trailed the World No. 1 by a touch at 11-10 in the second period, but Deriglazova couldn’t be stopped and scored five straight to win the bout, 15-10.

Massialas finished 4-1 in pools and defeated Martina Sinigalia (ITA), 15-7, to advance to the second day of competition. Although she lost to Leandra Behr (GER), 15-12, in the table of 64, Massialas moved up from No. 5 to No. 4 in the National Team Point Standings, continuing her back-and-forth race with Iman Blow to qualify for Team USA.

Two members of the 2020 Junior World Team each earned top-64 results as well.

Zander Rhodes (South Orange, N.J.), a 2019 Cadet World Team member, also finished the pools with a 4-2 record and won her next bout against Maria Teresa Diaz (ESP), 15-10, to qualify for the second day. In the 64, Rhodes lost to Fanny Kreiss (HUN) who went on to earn a top-eight finish.