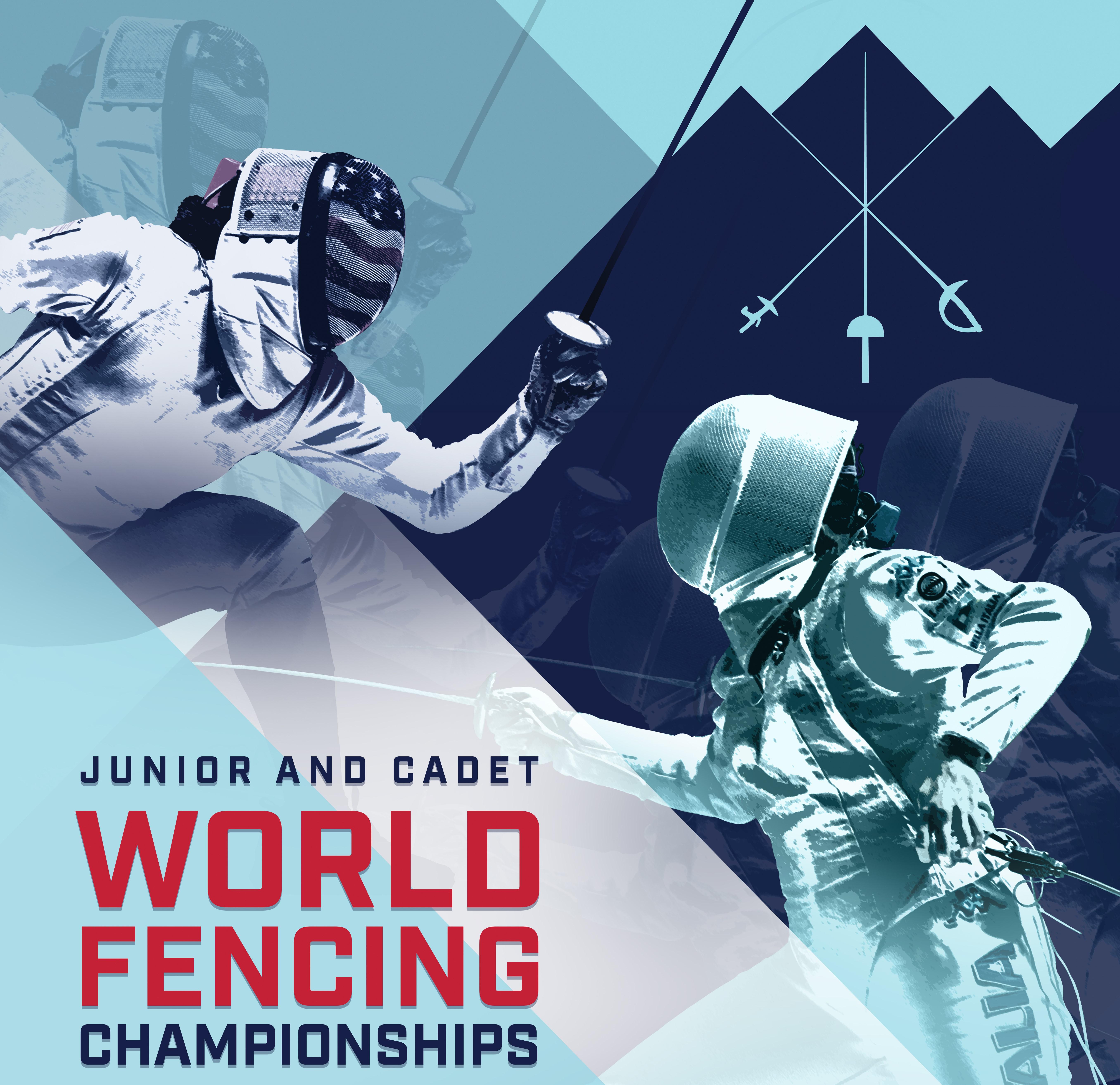 (Colorado Springs, Colo.) – For the first time in 20 years, the Junior and Cadet World Championships were scheduled to be held in the United States beginning April 3 and continuing through April 11 in Salt Lake City.

Forty fencers were selected to represent Team USA and compete against the best young fencers in the world with 1,000+ athletes from 100+ nations scheduled to compete in the nine-day tournament.

On March 12, the Junior and Cadet World Championships were postponed due to the COVID-19 pandemic which has since gone on to shut down day-to-day functioning around the world.

The following is a look at the athletes of Team USA and how they reached the pinnacle of international competition for U20 and U17 fencers. Although no medals will be awarded this week, we are honored to recognize the accomplishments of these athletes in qualifying for Team USA.

All eyes were on Lauren Scruggs (Ozone Park, N.Y.) last year when she won both the Junior and Cadet World titles on back-to-back days as a 16-year-old. In addition to becoming the first U.S. foil fencer – male or female – to win both titles at the same Championships, Scruggs joined Olympic saber medalists Mariel Zagunis (Beaverton, Ore.) and Becca Ward (Washington, D.C.) in the USA Fencing history books. Although Scruggs only fenced in two international junior tournaments this season, she medaled in both and is ranked No. 2 in the world, winning gold in Bochum, Germany and silver in Zagreb, Croatia behind May Tieu (Belle Mead, N.J.) – a 2018 Cadet World silver medalist who won gold with Scruggs in the junior team event that same year. Scruggs is one of four fencers on the squad who are contenders for the 2021 U.S. Olympic Team. Scruggs, Tieu and teammates Zander Rhodes (South Orange, N.J.) and Maia Weintraub (Philadelphia, Pa.) are all ranked among the top 10 senior fencers in the nation as well. A freshman at Princeton, Tieu earned a position on the Junior World Team for the third straight year after winning gold in Zagreb as a junior and earning a top-32 finish on the senior circuit in Cairo. Sixteen-year-old Rhodes and 17-year-old Weintraub each qualified for the Junior World Team for the first time after fencing on Team USA as cadets in 2019. Rhodes fell to Scruggs in Bochum where she won bronze after taking gold at the San Jose Junior World Cup and is now ranked No. 8 in the Junior World Rankings. Weintraub, who is the No. 5 senior in the nation, earned a top-16 finish at the final Senior World Cup of the season before events were postponed due to COVID-19 in Kazan in February and earned junior bronze in Bochum.

As a team, the Americans are ranked No. 3 in the world with podium finishes at all four events in which they competed this season, including gold medals in Zagreb and Bochum. Scruggs and Tieu each won gold at the 2018 Junior World Championships with Rhodes and Weintraub slated to compete in team for the first time this year.

The U.S. Men’s Foil Team includes two past Cadet World medalists who each had hopes of earning individual medals in 2018 Cadet World Champion Kenji Bravo (San Francisco, Calif.) and silver medalist Marcello Olivares (Cooper City, Fla.) Bravo, now a freshman at Harvard, secured his position on Team USA with a bronze medal win at the final qualifying event of the season at the Sabadell Junior World Cup in February with Notre Dame freshman Olivares also medaling this season with bronze in Bangkok in December. Andrew Machovec (East Rockaway, N.Y.), Olivares’ teammate at Notre Dame, qualified for his first junior squad at the end of a season that included a silver medal in Bangkok and gold in San Jose in January. This year marks Machovec’s first appearance on the Junior World Team after fencing at the Cadet Worlds in 2017. A freshman at Columbia, Ashton Daniel (Cupertino, Calif.) qualified for his first Junior World Team with two bronzes on the circuit in San Jose and Sabadell.

As a team, the Americans are ranked No. 2 in the world behind Italy with both Olivares and Bravo returning from the squad that finished fourth in 2019. Team USA won three straight Junior World Cup silver medals leading into the Junior Pan American Championships where the squad won gold.

Three of the four women’s saber fencers on Team USA are returning medalists at either the Junior or Cadet World Championships. Both Princeton freshman Chloe Fox-Gitomer (Portland, Ore.) and Harvard sophomore Liz Tartakovsky (Livingston, N.J.) were on the team that won silver in 2018 with Tartakovsky also winning Cadet World bronze in 2017 as well as Junior World team bronze in 2016. Fox-Gitomer won back-to-back Junior World Cup medals in Dormagen, Germany and Segovia, Spain with Tartakovsky earning silver in Dormagen as well. Sixteen-year-old Honor Johnson (Bethesda, Md.) won bronze at the 2019 Cadet Worlds and is ranked No. 8 in the world as a junior after winning gold medals at the Junior Pan Ams as well as the Sosnowiec Junior World Cup in December. Columbia sophomore Nora Burke (New York City, N.Y.) competed with Fox-Gitomer on the team that finished fourth in 2019. All four athletes have fenced on the senior circuit this season with Burke and Tartakovsky currently ranked No. 6 and 8, respectively, after top-32 results at Senior World Cups.

After a fourth-place finish at the 2019 Junior Worlds, Team USA sits fifth in the world rankings, ending the season with a silver medal in Segovia and gold at the Junior Pan Ams.

Harvard freshman Mitchell Saron (Ridgewood, N.J.) is the reigning Junior World individual bronze medalist who reached No. 1 this season; however, the 2020 Ivy League Champion only fenced in two junior international events this season and, despite a gold medal win at the Boston Junior World Cup, saw his world ranking drop to No. 5. Kamar Skeete (Duluth, Ga.) moved up to No. 4 after successfully defending his 2019 Junior Pan Am title this year. Saron and Skeete’s teammate from the 2019 squad that won bronze, Columbia freshman Christopher Walker (Atlanta, Ga.), worked to balance school and traveling on the circuit this year, but picked up a clutch gold medal win at the Dourdan Junior World Cup to qualify for Team USA for a fourth year after winning Cadet World silver in 2017 as well. After fencing at the 2019 Cadet Worlds, Luke Linder (Chandler, Ariz.) earned a position on his first Junior World Team after a bronze medal win at the Sochi Junior World Cup and silver at the Junior Pan Ams.

Team USA won back-to-back bronze medals at the last two Junior World Championships and the Americans returned three members of the 2018 squad in Saron, Skeete and Walker. The U.S. men are ranked No. 2 in the world with a trio of silver medals on the circuit, including the Boston and Sochi Junior World Cups as well as the Junior Pan Ams.

Emily Vermeule (Cambridge, Mass.) missed the podium in both individual and team at the 2019 Junior Worlds by a single round, earning a fifth-place finish in individual and finishing fourth in team after winning silver at the 2018 Cadet Worlds. Vermeule finds herself as the veteran of this year’s squad where the 18-year-old is joined by a group of 16-year-old first-time Junior World Team members eager to make their mark on the world’s stage. Hadley Husisian (Oakton, Va.) won Team USA’s sole medal on the Junior World Cup circuit this season, taking silver in Bratislava to secure her position on the team while Michaela Joyce (Sterling, Va.) also climbed the world rankings with a gold medal at the Junior Pan Ams. After fencing at the 2019 Cadet Worlds, Jessica Lin (Basking Ridge, N.J.) qualified for this year’s junior squad with a top-eight finish at the season’s final Junior World Cup in Dijon.

Team USA finished fourth at the 2019 Junior World Championships with Vermeule as the returner from last year’s squad. Ranked No. 5 in the world, the U.S. Women’s Epee Team won gold at the Junior Pan Ams and added 16-year-old Junior Olympic Champion Faith Park (Lorton Va.) to the squad’s team event lineup this year.

The U.S. Men’s Epee Team won its first silver medal in 20 years in 2019 and holds the No. 1 world ranking after a season that included a gold medal at the Bale Junior World Cup and silver in Belgrade as well as a silver at the Junior Pan American Championships. Notre Dame freshman Valentin Matveev (Las Vegas, Nev.) joins the squad’s lineup in his Team USA debut.

As the reigning Junior and Cadet World Champion, Lauren Scruggs (Ozone Park, N.Y.) was this season’s favorite in the event, but elected to skip the cadet international circuit in favor of junior and senior events. Zander Rhodes (South Orange, N.J.) kept the cadet tournaments on her travel docket as well and ended the season at No. 3 in the Cadet European Cup standings after gold medals in Manchester and Cabries. Sixteen-year-old Evelyn Cheng (Palo Alto, Calif.) joins the team for the first time in an event in which the United States has medaled every year since 2008.

Both 15-year-old Chase Emmer (Morristown, N.J.) and 16-year-old James Chen (New York City, N.Y.) returned to the squad this season after competing at the 2019 Cadet Worlds. The two won gold and silver, respectively, in Cabries. Fifteen-year-old Daniel Zhang (Belmot, Mass.) qualified for his first Cadet World Team after bronze medal wins in Rome and Bratislava as well as a gold medal win in the Division I event at the 2019 July Challenge.

This year’s cadet men’s saber squad features three first-time team members, but the trio have amassed four medals on the international circuit among them. Colby Harley (Alpharetta, Ga.), Simon Kushkov (Newton, Mass.) and Nolan Williams (Watchung, N.J.) each find themselves following in the footsteps of Americans who have medaled in this event in six of the last eight years. Seventeen-year-old Williams won gold in Moedling, Austria to qualify for Team USA while 15-year-old Harley claimed bronzes in Godollo, Hungary and Sofia, Bulgaria. Sixteen-year-old Kushkov also reached the podium in Bulgaria, winning bronze.

Congratulations to the following USA Fencing Clubs whose athletes qualified for Team USA:

*All clubs above are the Primary Club affiliation of team members.