National Championships and July Challenge Canceled Due to COVID-19 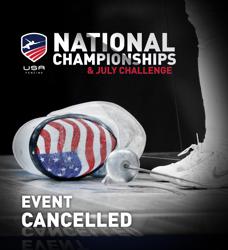 (Colorado Springs, Colo.) – In the wake of the COVID-19 pandemic, USA Fencing has announced the cancellation of the National Championships and July Challenge, which was scheduled to be held in Louisville, Ky.

Originally scheduled for June 28 – July 7, the tournament, which draws nearly 5,000 participants ages 8-80+ over 10 days of competition, was previously postponed with the potential of holding the event in August.

“Summer Nationals has become the largest fencing tournament in the world and the culmination of the season for athletes of all ages over the last 30+ years. But the tournament is more than that. For athletes and their families, coaches and tournament staff, Summer Nationals has become a tradition and an opportunity for the fencing community to come together every year,” said USA Fencing Senior Director of Sport Operations Christine Strong-Simmons. “We worked with our partners at the Louisville Sports Commission as well as the Louisville Convention and Visitors Bureau and the Kentucky Division over the past two months regarding dozens of possible scenarios and contingency plans to hold the event in August or September. However, the health and well-being of our members is the most important thing to consider at this time and now we will focus on preparing for what fencing competition looks like in the upcoming season.”

At this time, the state of Kentucky is not allowing gatherings of more than 50 people until July 1 with the timeline for when the state will open for large events still unknown.

On May 15, USA Fencing sent out a survey to all competitive members as well as tournament officials to receive feedback regarding what safety measures the community would like to see put in place when events resume as well as the likelihood that competitors and staff would participate in an upcoming event such as Summer Nationals.

With more than 3,000 respondents participating in the survey, only 35% of those who previously planned on competing at Summer Nationals described themselves as “likely” or “very likely” to compete at a national event held in August with 38% responding in the same manner for a national event in September. Accordingly, only 35% of tournament officials responded that they would be likely to volunteer to work a national event an August with the number increasing to 41% in September. Additional surveys will be conducted in the coming weeks.

“We appreciate everyone who took the time to share their feedback. While canceling this event for the first time in the history of Summer Nationals was a challenging decision, we will be doing everything we can to work on how to structure future tournaments in a manner that helps protect all participants,” said Brandon Rochelle, chair of the Tournament Committee. “With states around the country still under orders such as stay at home or safer at home, one of the challenges this tournament presents is when athletes will be able to return to regular training in order to be in proper condition to compete at a national level event. We all want to return to competition as soon as possible, but we also need to ensure that athletes have time to prepare for such an event.”

On April 29, the USA Fencing Board of Directors made the decision to allow the sanctioning of non-competitive fencing activities in locations where clubs are permitted to operate or reopen by local and state laws, regulations, executive orders and other legal mandates regarding COVID-19.

Although the sanctioning of local and regional events has not resumed, USA Fencing released Return to Fencing Guidelines on May 26 to help athletes, coaches, club owners and division officers prepare to return to lessons, practice and training as states begin to reopen and allow such activity.

“Club owners and coaches around the country have been extremely innovative in order to keep fencers engaged in the sport throughout the last few months. As clubs begin to reopen throughout the summer, we know fencers will be excited to return to the sport. Although we are all disappointed at the cancellation of Summer Nationals, we encourage fencers to return to practices, lessons and camps in preparation for a return to competition at all levels as soon as we can safely do so,” said USA Fencing CEO Kris Ekeren.

Athletes will age out of their current age categories on July 31. As announced in April, classification degradation will take place on Jan. 1, 2021 rather than Aug. 1, 2020.

Any details regarding future event dates will be released at www.usafencing.org.

Athletes who previously requested that registration and event fees from the March and April North American Cups or Division I National Championships be transferred to Summer Nationals will be contacted by the National Office regarding refunds.

Additional details regarding events that were scheduled to take place during the National Championships, including the 2020 Hall of Fame Induction Ceremony as well as the 2020 All-Academic and All-American Receptions, will be posted in the coming weeks.

If you have questions regarding the event, the refund process, etc., please contact nationalevents@usafencing.org.