Nominations Now Being Accepted for USOPC Coach of the Year Awards 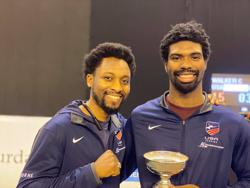 Terrence Lasker (left) was named 2017 Developmental Coach of the Year by the USOPC.

The USOPC Coach of the Year Program honors coaches and service providers who are making a significant impact in their sport and National Governing Body.

There are eight categories as part of the USOPC Coach of the Year Program:

All accomplishments must have taken place from October 2019 through October 2020 and nominees must be currently employed or in their first year of retirement.

Nominations will be accepted through November 29. Nominations should be as detailed as possible and include examples. Individuals may nominate multiple coaches for the various categories.

Each National Governing Body may submit one coach in each category. After all nominations are submitted, USA Fencing will partner with the United States Fencing Coaches Association to create a selection committee composed of coaches at various levels.

USA Fencing will announce the selection committee’s final submissions and submit nominations to the USOPC in December. The USOPC is scheduled to announce its winners in January of 2021.