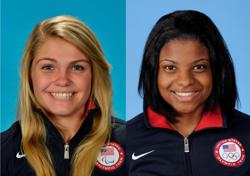 Paralympian Cat Bouwkamp and Olympian Nzingha Prescod will join the USA Fencing Board of Directors in January.

Following the conclusion of an election among elite fencers, two-time Olympian Nzingha Prescod (Brooklyn, N.Y.) and 2012 Paralympian Cat Bouwkamp (Fishers, Ind.) have been selected as athlete directors who will serve on the USA Fencing Board of Directors beginning on Jan. 1, 2021.

In August, the USA Fencing Board of Directors voted to amend the bylaws to increase the level of athlete representation on the board from 20% to 33%.

Prescod and Bouwkamp join two-time Senior World team medalist Daria Schneider (Brookline, Mass.) and 2014 Senior World Team member Adam Watson (Hoboken, N.J.) as the athlete directors on the board. All four athletes will complete their terms after the conclusion of the 2021 Olympic Games.

The first African-American fencer to win an individual medal at the Senior World Championships with a bronze in 2015, Prescod was instrumental in leading the U.S. Women’s Foil Team to three straight medals at Senior World Championships, including the squad’s first-ever gold in 2018. A graduate of Columbia University with a bachelor’s degree in political science with a concentration in race and ethnicity, Prescod is one of the founding members of USA Fencing’s Diversity, Equity, Inclusion and Belonging Resource Team. She continues to serve as an instructor and mentor at the Peter Westbrook Foundation and is the founder of Fencing in the Park, a community-based, outdoor summer series in Brooklyn that introduces fencing to children of color.

The youngest U.S. fencer ever to compete at the Paralympic Games, Bouwkamp represented Team USA at just 16 years old in 2012, fencing in both the epee and foil events and went on to win bronze in women’s saber at the 2013 Senior World Championships. Bouwkamp earned bachelor’s degrees in therapeutic recreation and non-profit management from Indiana University while also serving of the founder of the university’s wheelchair basketball team – the first adaptive sports program at IU. Bouwkamp continues to be involved in the disabled sports community, both as a fencer and through her position as the membership and SafeSport coordinator at the U.S. Association of Blind Athletes in Colorado Springs, Colo.

A total of 119 athletes voted in the election which was open to all athletes who have represented the United States at the Olympic or Paralympic Games, Pan American Games or Senior World Championships. Athletes were allowed to vote for a maximum of two candidates in an electronic election conducted from Dec. 4-11.

The complete vote count is as follows: