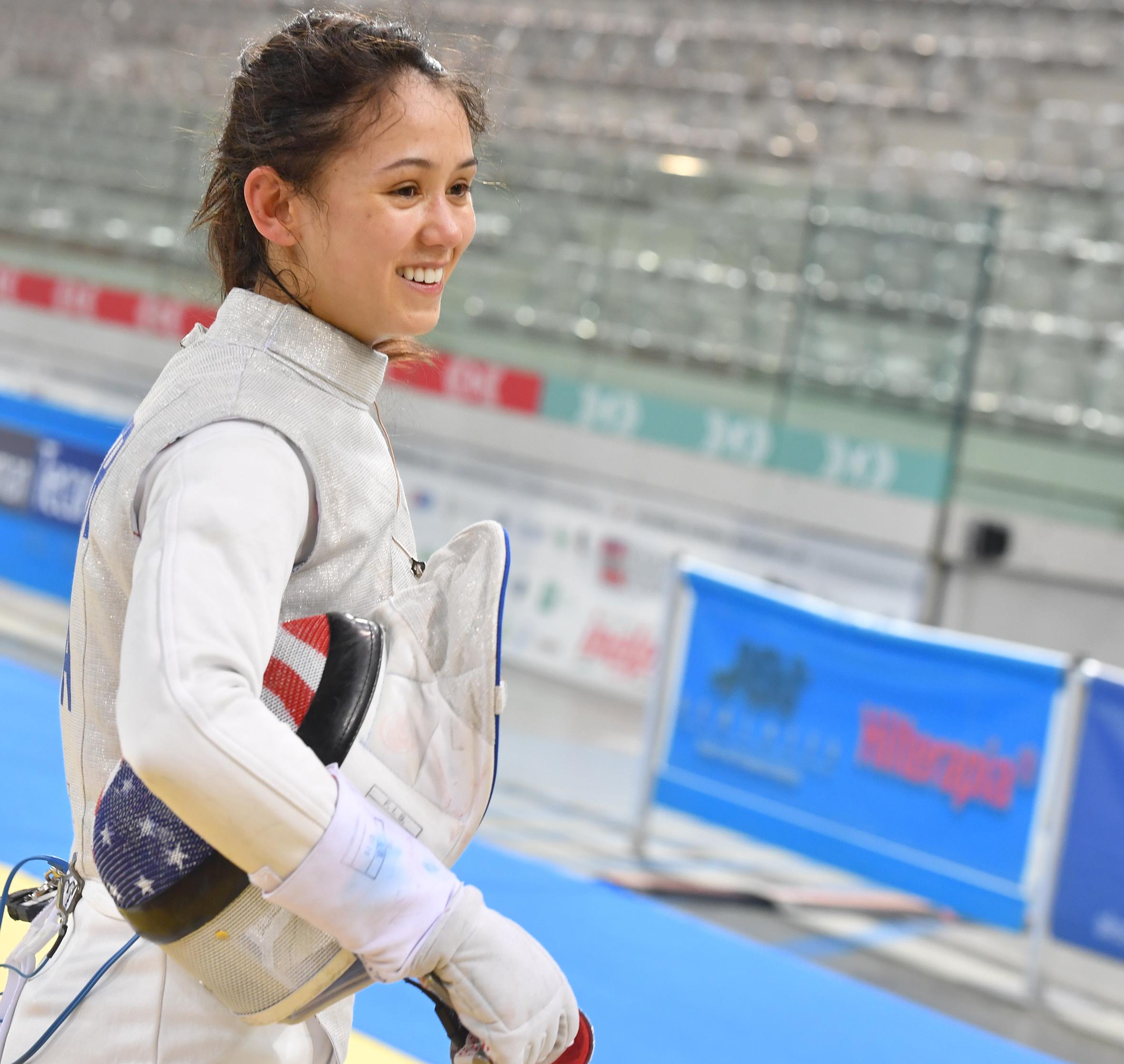 Lee Kiefer punched her ticket to the Tokyo Olympic Games with three straight podium finishes on the World Cup circuit during the 2019-20 season. Photo Credit: #BizziTeam. 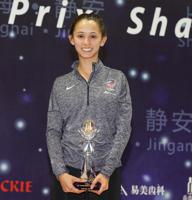 Kiefer on the podium at the 2019 Shanghai Grand Prix with the sixth of her seven career Grand Prix medals. Photo Credit: #BizziTeam.

As the countdown continues to the Tokyo 2021 Games, USA Fencing is sitting down with members of Team USA to share the stories behind their Road to Tokyo.

Up first is Lee Kiefer (Lexington, Ky), who became the first U.S. fencer to qualify for the Tokyo Games after her bronze medal win at the Katowice World Cup in January of 2020. Tokyo will mark the third Olympic Games for Kiefer who earned a top-eight finish in her Olympic debut as an 18 year old in 2012. Now in her third year of medical school at the University of Kentucky, Kiefer led the U.S. Women’s Foil Team to three straight podium finishes at the Senior World Championships, including the squad’s first-ever gold in 2018. The four-time NCAA Champion for Notre Dame married her U.S. and Fighting Irish teammate, Gerek Meinhardt (San Francisco, Calif.), in 2019. The two live and train together in Lexington where Meinhardt is in his first year of med school at UK.

1. You qualified for Tokyo in January, had three medals on the circuit and then the World shut down in March right before the Anaheim Grand Prix. What was going through your head at the time?

When COVID came out to be more serious than the flu, I was scared for my grandparents. That was my first thought. It was not about fencing. It was just about the vulnerable people, my life, other people’s lives, their loved ones. I was very scared, and I was just hoping this would be something that would pass soon, which was [laughs] an ignorant thought looking back on it.

2. Obviously the preparation for this Olympic Games is different due to COVID-19. How have you been preparing both physically and mentally?

Towards the beginning of the pandemic, Gerek and I actually built a fencing strip in my parents’ basement, so we were trying to train with each other without having to go to the club. Granted, the club was closed a lot of the time too, so that was our move. We just tried to maintain a baseline, so we didn’t forget how to lunge [laughs] and our point control didn’t get too terrible. But then we actually went back to school, and so for probably the first time in my life, I was pretty much a full-time student, and that was a different feeling.

3. So how is med school going?

I finished seven months of my third year, about two thirds of the ways through … I applied for another leave of absence because, with Tokyo over the summer, I would not be able to get my required rotations in with recommendations and applying to residency with fencing. I would probably just bomb both of those things. And considering both of those things are my life work, I decided I’m not in a rush. I’ll just take a little bit more time and give my best over two years instead of one year.

4. Have you decided what area of medicine you want to specialize in or at what point does that come?

My classmates are actually doing that right now. We actually have meetings this week about career planning, but because I have a little bit more time, I’m not going to lie, I don’t know what I want to do and so I’m not going to rush it.

5. What has been the key for you to balance training and med school?

I think it came down to having a really good support system. Obviously my husband, my family and my teammates – the people who I’ve worked up to this Olympics with. I think the fact that we all shared this journey and this goal motivated me to make the final push.

6. What does a typical day look life for you?

So before this week, I’m coming from my internal medicine rotation and we would work six out of seven days and usually I’d be in the hospital at like 6:45 in the morning and then I’d leave somewhere between 2-5 p.m. And then I’d come home and I’d study until I was pooped. And then in terms of fencing, we’ve been trying to fence once to twice a week, which is not optimal, but we’re pretty proud of ourselves for making it happen. And then we built a little gym in our basement, so we try to sneak in quick workouts a few times a week to supplement. So that’s been our schedule, but now, this is my last week of miscellaneous lectures, career planning, so I’m basically back to becoming a full-time athlete again.

7. With everything you have going on, are you more of a morning or night person?

In my perfect world, I’d wake up at five in the morning. I would nap from like 10-2 and I’d go to bed at midnight. That would be my perfect life.

8. You and Gerek got married last year. Looking back now, what were some of your favorite parts of the wedding?

My favorite part was being on the altar with Gerek because, for some reason, we were both so nervous. We were practically shaking, which is absurd considering we’ve been together for like 10 years and everyone at our wedding, we’ve known them for 100 years. But it was a beautiful, breezy day and it really seemed dreamlike. It was very special.

9. Besides you and Gerek, who was best dressed?

Our wedding party looked very attractive. They had on beautiful dresses and suits and when we look back on our pictures, we’re like, “Damn, we have attractive friends!”

10. Did you and Gerek go on a honeymoon? Where did you go?

We did. We were able to make it to Saint Lucia for a week. It was gorgeous. It was tropical and warm and relaxing – everything one could ever want in a honeymoon.

11. I know you had several Notre Dame fencers in your bridal party. And speaking of Notre Dame, you won four individual NCAA titles and a team title. Do you have a favorite NCAA memory?

My senior year at NCAAs was very special. I got to be on the team with my brother and also, a lot of the people who were in our wedding were a part of that team. Notre Dame fencing, we had been expected to win so many times and had lost so many times. It was my senior year, and to be able to have everyone put it together with so many people that I love, was very fun.

12. Notre Dame is known for several of its sports. Did you have a favorite sport to attend?

I did not have time to watch other sports, but we did watch leprechaun tryouts before, and that was pretty interesting.

Once every year, they have to choose a new leprechaun who runs around the football games. And a lot of people apply and have to dance and entertain a group of people to get the job … It’s very weird, but very fun.

14. You talked about retiring after 2016. What made you want to keep going and eventually make that push for Tokyo?

I felt like I still had more to give and more to learn. During my senior year, I think when I reached No. 1 in the world, I felt like I had put some things together and I still loved the sport. So, I talked to people at UK Med School and they were supportive, as well as my family, so there really was not a good reason to retire at that point.

15. What is your favorite moment of your fencing career so far and why?

My favorite moment is when the women’s foil team won Senior Worlds [in 2018]. That moment would be pretty hard to top. I think as a team, going into that day, we had so much trust in each other and we had so much focus and intensity. Rarely does it just come together as a whole group. Not only were we all fencing well, but we were all fencing for each other, and that felt good.

16. This will be your third Games. What do you take from your experience in London and Rio into Tokyo?

So in London, I was young and everything was new and I just had fun existing. In Rio, I put a lot pressure on myself, but in other senses, having one Olympics under my belt, I did probably make more of Rio itself as an experience. I appreciated it more. For Tokyo, I would like to go out there like a novice, like my first Olympics, and have fun and fence free with no expectations, but also make sure I appreciate every moment of the place and the people.

17. If you could compete in a different Olympic sport, which would it be?

I might want to compete in rhythmic gymnastics. I love watching that at the Games. I think they’re so beautiful and have such great focus. It looks like art, so I’d like to play.

18. What’s on your pump-up playlist before a competition?

My moods definitely fluctuate from day to day and before competition. But I would say usually I’m a silence type of person. If I wake up in the morning, go to breakfast and Buckie is like, ‘Good morning, Lee!’ I’m just like ‘Shut the front door, Buckie. It’s quiet time.’ So silence would be normal playlist of choice [laughs].

19. Once you retire, and besides your career, what’s on your bucket list?

I definitely want to have babies one day. Does that count as something on my bucket list?

20. Of course. On a completely different note, what is your favorite food?

No. Just quantity over quality.