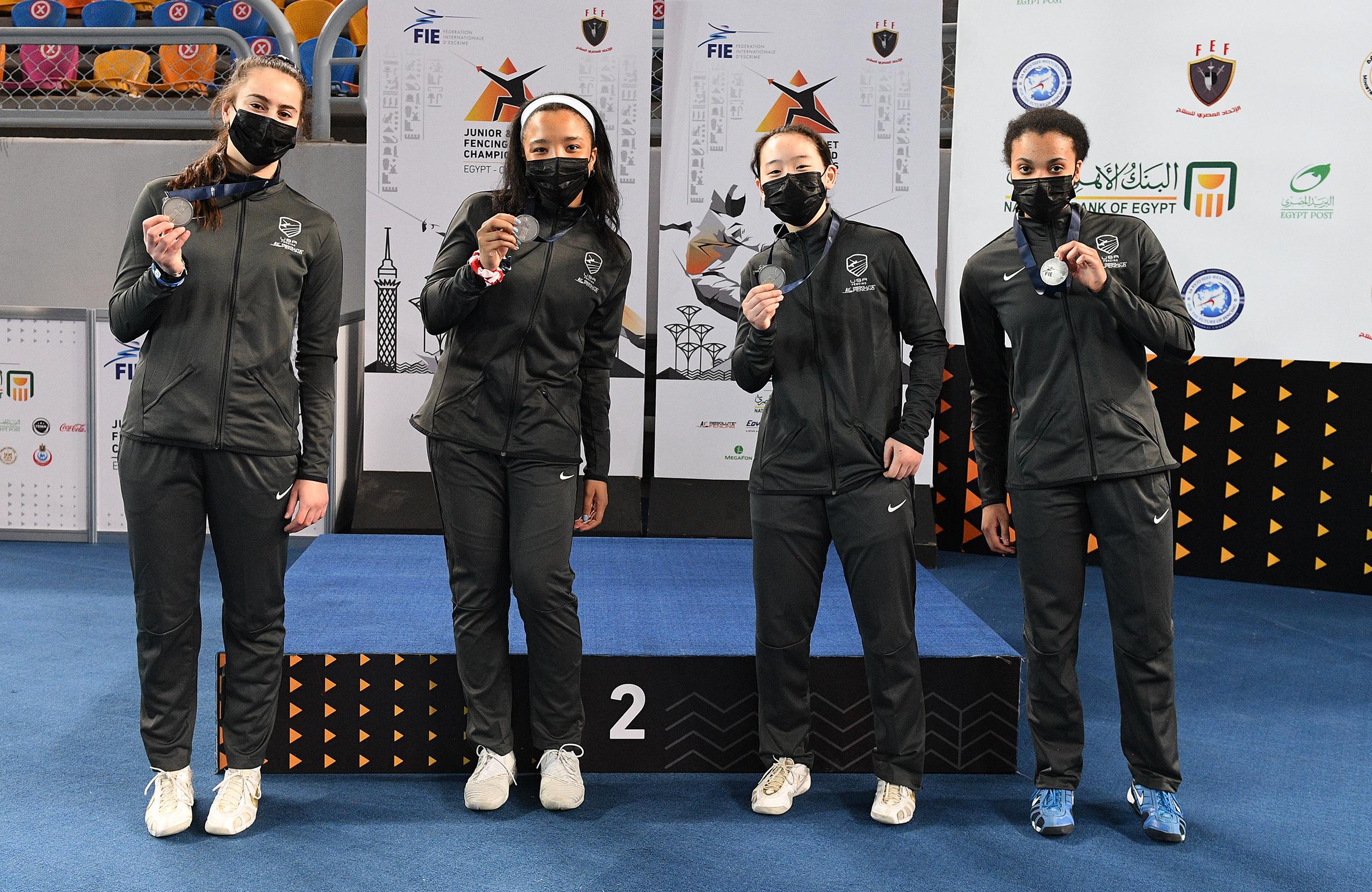 (Colorado Springs, Colo.) – The U.S. Women’s Saber Team secured the silver medal on the third day of competition at the Junior and Cadet World Championships in Cairo, Egypt.

Going 3-1 on the day, including a come-from-behind victory in the semifinals to clinch a medal, the silver marks the second medal for Team USA in the last three years the tournament has been held.

The United States remains No. 2 in the overall medal count with four total saber medals, one behind Russia.

As the No. 3 seed entering the event, Team USA had a bye into the table of 16. Fencing Belarus, Johnson gave the United States a 5-1 lead to start the match and the Americans won six of the nine bouts, including back-to-back 5-0 sweeps in the fourth and fifth rounds, to post a 45-30 victory.

In the quarterfinals, Team USA fenced Ukraine, winning the first three bouts to take a 15-4 lead and going on to win, 45-32. Johnson led the United States with a +9 indicator.

Fencing in the medal rounds, Team USA showed its grit with a 45-42 semifinal win over Romania. Although the Americans won the first bout, 5-2, Romania won or tied the next five to take a 30-23 lead.

Starting its comeback, Greenbaum took the seventh, 8-5, and Kim came into the match and won the eighth, 8-5, to close the gap to one going into the final bout, 40-39. Romania took the first two points of the ninth round, but in the anchor position, Johnson scored the final six points of the match, taking the bout, 6-2, to complete Team USA’s comeback.

However, in the final, the United States fell behind to Korea as their team won the first six bouts, and this time, the deficit would be too much to overcome and Team USA claimed the silver, 45-31.

The top-seeded team in the field, Team USA directly advanced to the table of 16, where the squad won eight of the nine bouts to cruise past Jordan, 45-20. Linder led the United States with a +12 indicator.

The quarterfinals saw Team USA’s momentum continue as it didn’t lose a single bout for a 45-28 victory over Korea.

In the semifinals, the Americans faced the home country, Egypt. Although Team USA built a 10-8 advantage after two rounds, Egypt responded with Adham Moataz (EGY), the bronze medalist in the individual event on Saturday, giving the Egyptians a 15-12 lead and they never looked back with the United States falling, 45-31.

Up by two points after three bouts in the bronze medal match, Team USA watched its lead slip away as France won the next three bouts to take a six-point lead, 30-24. The United States cut its deficit to four after the seventh, but was only able to stay even with France in the final two bouts, coming up short, 45-41.