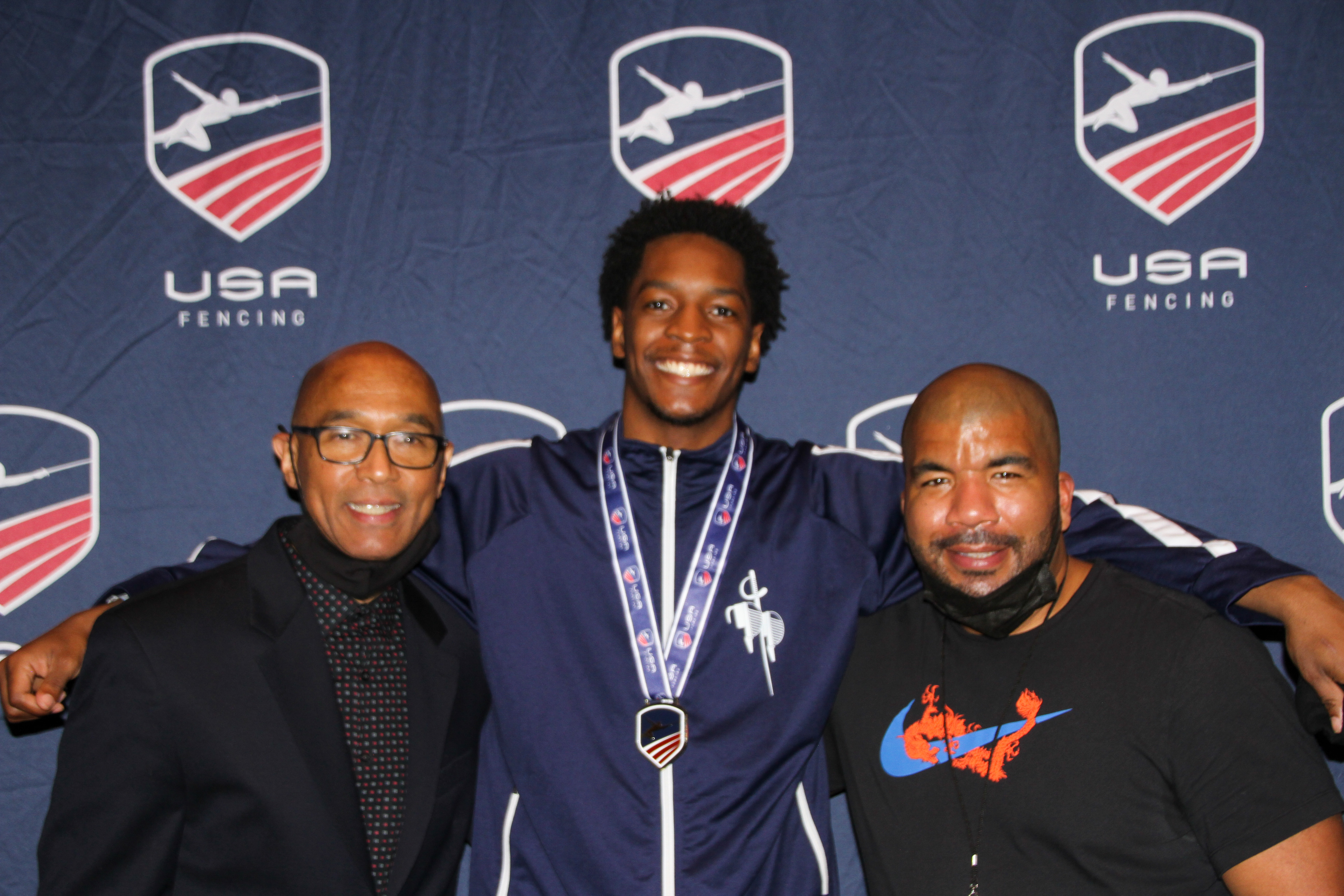 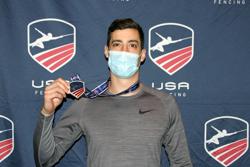 (Richmond, Va.) – The replacement athlete positions for both the U.S. Olympic Men’s Saber and Epee Teams would come down to the wire with Khalil Thompson (Teaneck, N.J. / Peter Westbrook Foundation) and Alen Hadzic (South Orange, N.J. / Fencers Club) each winning gold at the May North American Cup to qualify for Team USA on Friday with all nominations subject to final approval from the U.S. Olympic & Paralympic Committee.

Thompson, who made his Senior World Team debut in 2019, entered the competition as No. 4 in the USA Fencing Men’s Saber National Team Point Standings, and won his first NAC title as a senior to secure his position in Tokyo.

“Honestly, this is the greatest accomplishment of my life and it’s my first NAC win in seniors so I’m actually really proud of that, but qualifying hasn’t really hit me yet,” said Thompson who held off two of his teammates in the race to qualification. “I was just super focused today. I’ve been very nervous the past few weeks just because we took a year off from competition, coming back and then me, Grant [Williams] and Jonah [Shainberg] had like 100 point difference. Me and Grant had a 50 point difference, so it all came down to being super focused today.”

All three athletes finished 6-0 in pools, separating themselves into different quadrants of the direct elimination round with Shainberg seeded first, followed by Thompson and Williams.

After a bye into the table of 64, Thompson defeated Avin Rai (Chestnut Hill, Mass. / Boston Fencing Club) and Will Attig (Portland, Ore. / Oregon Fencing Alliance / Notre Dame) each by 15-10 margins.

After a close first period, Thompson went into the break with an 8-7 lead and went on to take the bout, 15-12, to advance to the semifinals. Thompson would fence Williams who defeated Josef Cohen (Barrington, R.I. / Peter Westbrook Foundation / Columbia), 15-10, in the other quarter-final. Shainberg found himself out of contention after a 15-12 loss to 2018 Junior World team bronze medalist Andrew Doddo (South Orange, N.J. / Fencers Club / Columbia)

Although he did not know it at the time, it would be Thompson’s win over Anglade that would allow Thompson to earn enough points to punch his ticket to Tokyo.

“I saw that I had to fence Grant, so, in my head I said ‘this match is the one that counts,’” Thompson said.

Thompson took an 8-5 lead after the first break of the semifinal, but Williams scored two quick touches to open the next period and came within one of Thompson at 9-8. With Thompson one score from closing the bout at 14-12, Williams came back with a one-light hit to bring the score to 14-13. Thompson replied with one light to win the bout, 15-13, and fell to the strip in relief.

In the finals, Thompson took on Doddo who went on a roll in the first period, taking an 8-4 lead at the break. Thompson came back in the second, going on an 11-2 run to win gold, 15-10.

The losses put the race down to Hadzic and two-time Senior World Team member Adam Rodney (New Orleans, La. / Peter Westbrook Foundation / St. John’s) with both athletes needing a bronze medal in order to pass Thompson and the fencer who finished higher in Richmond earning the replacement athlete position.

After a 15-11 win against Simon Jones (Belmont Mass. / Marx Fencing Academy) in the 16 and a 15-9 win against Jonas Hansen (Cambridge, Mass. / Olympia Fencing Center / Harvard) in the eight Hadzic passed Thompson in the standings.

Rodney would fence first in the semifinals, taking on 2020 Cadet World Team member Ethan Kushnerik (Brooklyn, N.Y. / New York Athletic Club). Rodney controlled the bout from the start, ending the first period with a 5-2 lead and closing the second at 14-10 before scoring a single to end the bout at 15-10.

The second semi pitted Hadzic against Tristan Szapary (Wynnewood, Pa. / Fencing Academy of Philadelphia / Princeton) who anchored Team USA to a silver medal with at the Junior Worlds last month. Szapary held off Hadzic for much of the first period, keeping him to a one-touch lead at 5-4. By the end of the second period, Hadzic increased his margin to two points at 12-10. With a one-touch lead at 13-12 in the third, Hadzic scored to singles to end the bout at 15-12.

The wins by both fencers would send up the ultimate NAC final with both a gold medal and an Olympic berth on the line.

“Adam and I fence at the same club, so I know what to do and what not to do. And I had to take that times 100 and that was extremely difficult,” Hadzic said of his final bout. “I knew that not only was I exhausted, but he was on fire too.”

Rodney controlled the first period, taking a 5-3 lead, before Hadzic fought back with a 3-1 run to tie the bout at six in the second. Rodney held a one-touch lead at 10-9 late in the period, but a single by Hadzic and then a double put the score to a tie at 11. After the 90-second break, Hadzic and Rodney rolled into the third in a race to four touches. With the pressure on, Hadzic reeled off three straight singles to take earn both the replacement athlete position and gold, 15-12.

“It’s just been such a crazy last two years obviously with COVID. Especially for me, the last half of the season last year I was really starting to roll and then we didn’t have any competitions and I found out a month before they made the World Cup in Kazan,” Hadzic said. “I hadn’t been fencing, but I did well there and put myself in a position to do well here and then it literally went down to the wire. It’s been a whirlwind.”

Although no members of the Tokyo squad competed in the Division I men’s foil event, the field featured a look at athletes with potential for the 2024 and 2028 Olympic stages with former Junior and Cadet World Champion Geoffrey Tourette (Cupertino, Calif. / Silicon Valley Fencing Center / Harvard) winning gold in a field that featured three former Junior and Cadet World medalists in the top four.

Tourette’s final four  bouts would pit him against a series of Junior and Cadet World medalists.

Marcello Olivares (Cooper City, Fla. / Bluegrass Fencers Club / Notre Dame), a 2021 Junior World team medalist, pulled away from a tie with three unanswered touches to take a 6-3 lead which he then grew to 10-6. With Olivares up, 13-10, in the final minute of the first period, Tourette came back with three straight touches to tie the bout at 13 and clinched the win at 15-14 with one light and 5.27 seconds on the clock before the break.

In the finals, Tourette fenced Sidarth Kumbla (San Jose, Calif. / New York Athletic Club / Columbia), his teammate on the squad that won gold at the 2017 Junior World Championships. The longtime teammates and friends kept the score tied at five after the first period and tied at eight midway through the second before Tourette put up a 4-1 run to end the period at 12-9. Tourette controlled the third as well, outscoring Kumbla, 3-1 and earning the win at 15-10 on a single light touch.

Complete Division I men’s results are as follows: