Ten Days of Summer Nationals to Begin in Philadelphia on Saturday 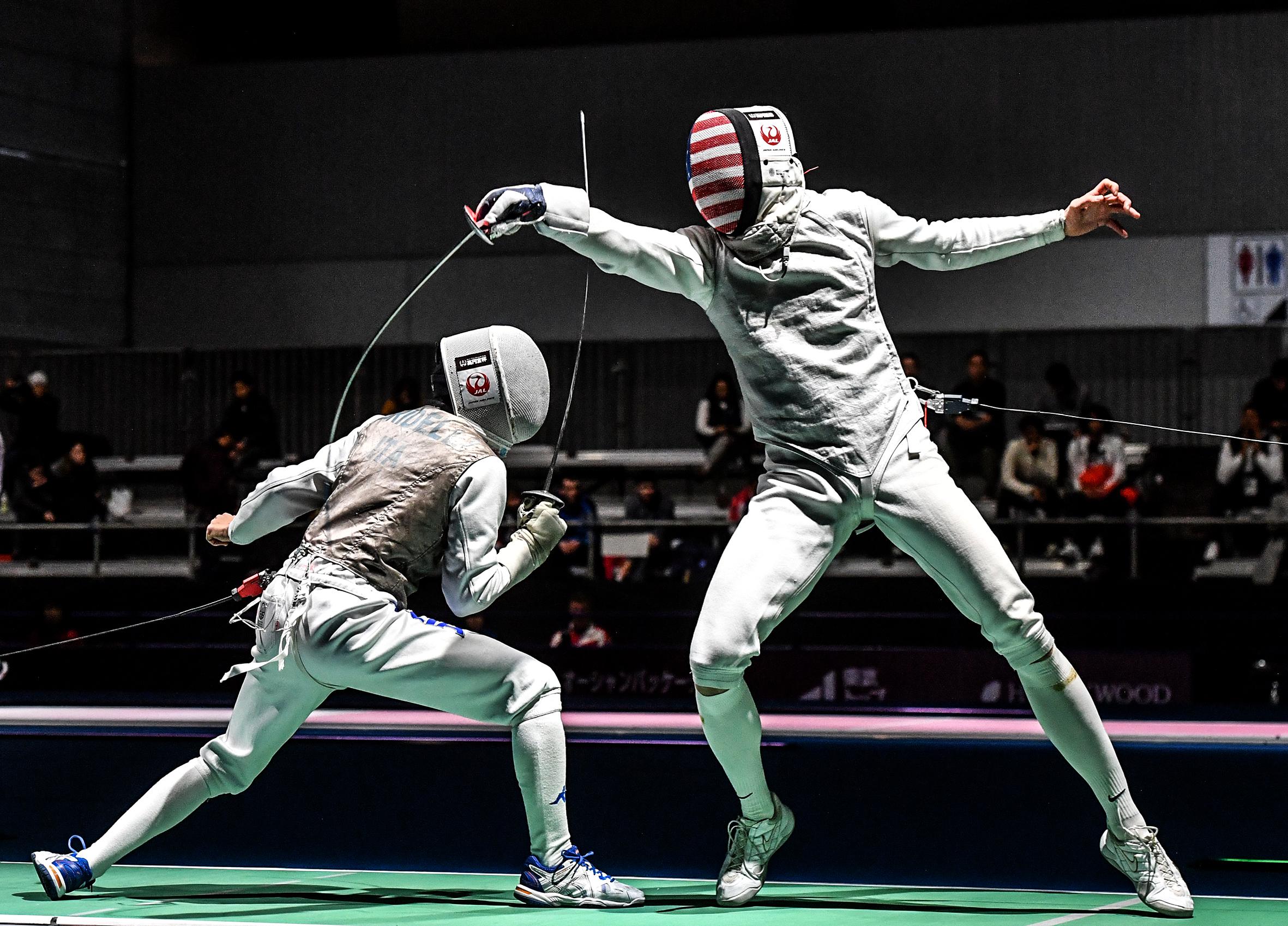 Tokyo Olympic qualifier Nick Itkin is scheduled to compete in Philadelphia prior to leaving for the Games. Photo Credit: #BizziTeam.

(Colorado Springs, Colo.) – Nearly 4,000 fencers will compete in what will be the largest fencing tournament in the world since the COVID-19 shutdown when the USA Fencing National Championships and July North American Cup are held at the Pennsylvania Convention Center in Philadelphia from July 3-12.

The 10-day competition will include athletes ranging from 7 to 88 years old fencing in 82 individual and 18 team events.

Among the athletes scheduled to fence in the Division I events in Philadelphia are three athletes who have qualified for the Tokyo Olympic Games:

With most of Team USA’s Olympians in training camps and final preparations for Tokyo, the Division I National Championships are wide open for both new and returning faces on the podium.

The following is a look at the competitors to watch in each of the Division I events:

Considered to be one of the deepest fields in the tournament, any of the top 16 seeds could come away with gold this weekend. Two-time Senior World Team member Adam Rodney (New Orleans, La. / Peter Westbrook Foundation) comes in as the top seed after a silver medal win at the May North American Cup. Two-time Olympian Soren Thompson (New York City, N.Y. / New York Athletic Club) fell short of qualifying for a third Games in Tokyo, but won two events on the NAC circuit during the two years prior to the shutdown and will be another to watch in Philadelphia. Dwight Smith (Elmont, N.Y. / Peter Westbrook Foundation) ended the Olympic qualification period as the second alternate to the squad after a top-32 finish at the Kazan World Cup in March and will be one to watch for a podium finish in Philadelphia. The men’s epee field also includes a number of junior athletes who have shown great results during the season, including Tristan Szapary (Wynnewood, Pa. / Fencing Academy of Philadelphia / Princeton) who swept both the junior and Division I gold medals at the June NAC and led Team USA to a silver medal in April at the Junior World Championships. Szapary also won bronze at the May NAC alongside 2021 Cadet World Team member Ethan Kushnerik (Brooklyn, N.Y. / New York Athletic Club).

Nick Itkin (Los Angeles, Calif. / Los Angeles International Fencing Center / Notre Dame), who won the Division I Nationals in both 2017 and 2018, is the front-runner in the field after giving up no more than nine touches to any single opponent in his undefeated run to gold at the June NAC. Geoffrey Tourette (Cupertino, Calif. / Silicon Valley Fencing Center / Harvard) won gold at the May NAC and has battled with Itkin throughout their careers on both the senior circuit as well as in juniors where the two won gold in team at the 2017 Junior World Championships. Adam Mathieu (Brooklyn, N.Y. / Fencers’ Club) won the last Division I Nationals in 2019 and earned top-four finishes at each of the five national tournaments that year as well. Three of the four members of the Junior World team that won silver in Cairo also will be fencing in Philadelphia, including Ashton Daniel (Cupertino, Calif. / Silicon Valley Fencing Center / Columbia) as well as Daniel Zhang (Belmont, Mass. / Star Fencing Academy) and Chase Emmer (Morristown, N.J. / V Fencing Club) who won gold and bronze at the Cadet Worlds, respectively.

With no past Div I National Champions in the field, the men’s saber event is filled with a lineup of young fencers seeking to make their mark. Jared Smith (Ladera Ranch, Calif. / Avant Garde Fencing Club / Notre Dame) followed his NCAA silver with a silver at the April NAC in his first podium finish at a Div I NAC. Two members of the 2021 Junior World Team, Robert Vidovszky (Emerald Hills, Calif. / Premier Fencing Academy / Columbia) and Jackson McBride (Gilbert, Ariz. / Phoenix Fencing Academy), will be in the mix in Philly with Vidovzky having previously earned a top-eight result on the Div I circuit as well as a silver medal at the 2018 Cadet Worlds. In addition to Vidovszky, two other past Cadet World medalists could be in contention in Philadelphia – 2019 bronze medalist Donghwan Park (Sacramento, Calif. / Premier Fencing Academy / Stanford) and 2021 bronze medalist Colby Harley (Alpharetta, Ga. / Nellya Fencers).

Anna van Brummen (Houston, Texas / Alliance Fencing Academy) comes in as the No. 1 seed and a replacement athlete for the Tokyo squad who earned the only individual World Cup title for a U.S. women’s epee fencer in the modern era with her 2016 gold medal in Suzhou, China. A 2019 Senior World Team member, Kasia Nixon (Los Angeles, Calif. / Los Angeles International Fencing Center / Princeton), has earned 10 top-four finishes at Division I national events and will be seeking her first gold medal in Philadelphia. Margherita Guzzi Vincenti (Oconomowoc, Wis. / Ataba Fencing Club) won Division I Nationals in 2014 and has been a fixture on the podium ever since, winning silvers at the final two NACs before the shutdown and a bronze at the June NAC last month. Seventeen-year-old Hadley Husisian (Oakton, Va. / Fencing Sports Academy) followed her Junior World Championships debut in April with a series of medals that included bronze at the April NAC in the Div I event, junior gold at the May NAC and both Div I and junior titles in June.

The top seed in the field, Kamali Thompson (Teaneck, N.J. / Peter Westbrook Foundation) earned bronze at both the April and May NACs and gold at the 2016 Div I Nationals. Thompson recently relocated to Philadelphia where she began her orthopedic surgical residency at Temple University this summer. A 2018 Junior World team silver medalist, Chloe Fox-Gitomer (Portland, Ore. / Oregon Fencing Alliance / Princeton) earned gold at the June NAC with both bronze medalists from the June event coming in as the No. 3 and 4 seeds. Atara Greenbaum (Boca Raton, Fla. / Alle Fencing Club / Notre Dame) and Ryan Jenkins (San Juan Capistrano, Calif. / Bergen Fencing Club / Princeton) have each represented Team USA at the Junior World Championships with Greenbaum winning silver in the team event in April.

Also among the events to watch in Philadelphia are the junior and cadet categories where Junior Olympic Champions will be crowned as well as the veteran events which will serve as the first of two qualifiers for the 2021 Veteran World Championships in Daytona Beach, Fla. For fencers in the 50-59, 60-69 and +70 age groups. The veteran events feature both fencers who took up the sport later in life as well as Olympians returning for a new type of competition. Watch for 2004 Olympian Ivan Lee (Brooklyn, N.Y. / Long Island University) to make his debut in the 40-49 men’s saber competition and Ann Marsh Senic (Royal Oak, Mich. / Renaissance Fencing Club) to age up to the 50-59 foil category and a chance at her first Vet World Team.