'A legend,' 'a wonderful human being,' a 'loyal friend' and so much more — the fencing community shares its memories of Team USA's four-time Olympic armorer. 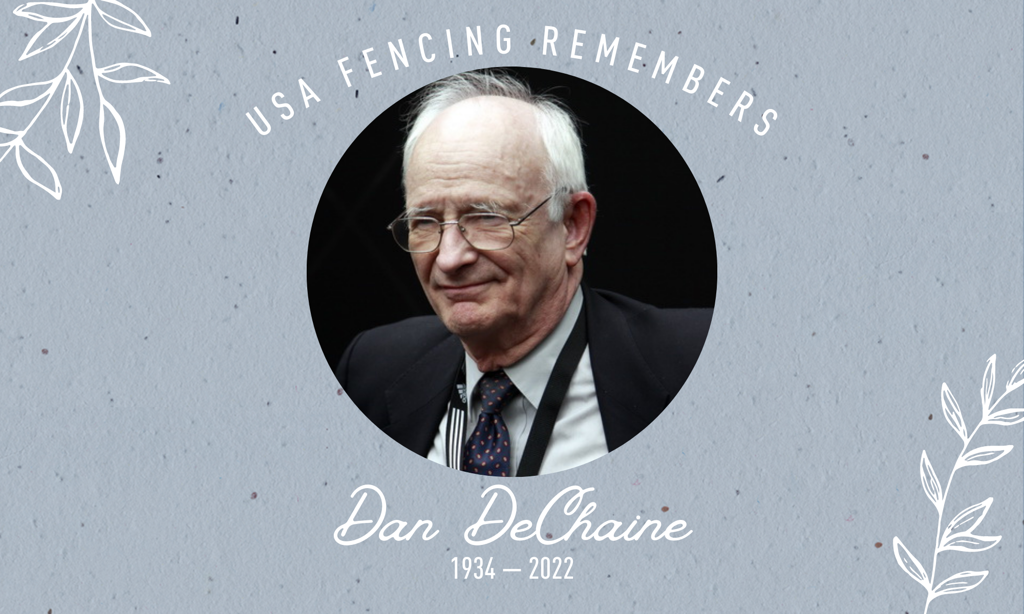 Those who knew Dan DeChaine inevitably have a story to tell about his talent as an armorer. They’ll recall that time he came through at the eleventh hour to return a lost-cause piece of fencing equipment back to working order.

But even those who never met the armorer extraordinaire certainly benefit from his legacy. He helped put U.S. armory on the map — one of the so-called “Holy Trinity” of armorers, alongside Ted Li and the late Joe Byrnes.

“In my fencing life, Dan was a fixture,” says three-time Olympian Rob Stull. “His name was synonymous with ‘armorer’ and so very much more.”

Dan DeChaine, who served as Team USA armorer at four Olympic Games and numerous Junior and Senior World Championships, World University Games and Pan American Games, died on May 20. He was 87.

In addition to ensuring that Team USA’s equipment was in tip-top shape at high-profile events like the 1968, 1976, 1988 and 1992 Olympics, DeChaine advanced the art of armory through his skilled and selfless service at the international level.

In 1985, DeChaine was elected to the FIE’s Electronic Signaling Equipment and Installations Commission, also known as the SEMI Commission. He served in that role for more than 30 years.

A year before his election to that prestigious post, DeChaine served as technical manager of fencing and the manager of armorers at the 1984 Olympics in Los Angeles. Those Games also featured test devices for fencing that DeChaine had personally invented, designed and constructed.

Somehow at those 1984 Olympics, DeChaine still found time to help others dodge disaster.

“Dan came up to me and told me that virtually none of the epees of the pentathlon team passed inspection,” remembers two-time Olympian John Moreau. “They were too long. Dan and I spent four hours filing the base of the blades so the weapons would pass. He didn’t have to do that since he wasn’t the pentathlon armorer. But that was Dan, always willing to help.”

Daniel Robert DeChaine Jr. was born Oct. 29, 1934, in Paso Robles, Calif. He grew up in a small farming community where “the classical music was Hank Williams,” he told fencing historian Andy Shaw in 2010.

“The idea that I would ever be in an international situation was something beyond my wildest dreams,” DeChaine said.

DeChaine found his love of fencing at Pomona College in the early 1950s, but the zoology major soon discovered that his passion for the sport was strongest when he was fixing weapons.

“In those days, there were only about six armorers in the United States, and none of them would speak to each other,” DeChaine said in 2010. “When you asked them a question — ‘how do you change a spring in the point?’ — [they’d say], ‘find out for yourself.’”

That attitude didn’t sit well with DeChaine or his fellow armorer Joe Byrnes.

“We decided that the situation was ridiculous,” DeChaine said. “It’s not going to happen anymore. There was no more ‘them and us.’”

By being a person others wanted around, DeChaine saw door after door open for him — including when, in 1967, he was named Team USA armorer for the Pan American Games.

“It was a monstruous surprise,” DeChaine said. “And it is a pack full of memories I will never forget. For the first time, I actually had an opportunity to work with people from other countries.”

DeChaine had a natural proclivity for helping others — even those not wearing the red, white and blue of Team USA.

Level-1 Armorer Donald Hollis Clinton Jr. holds a lot of titles, but he says he’s most proud of this one: “apprentice to Dan DeChaine.”

Clinton remembers meeting DeChaine nearly 50 years ago. Clinton had just been named manager of the fencing team at California State University, Long Beach, and his coach suggested he visit the local fencing shop to get some pointers.

Looking back, Clinton realizes this was a bit like asking a kid who wanted to learn basketball to go ask LeBron, Magic or Kareem.

Clinton absorbed as much as he could by watching that man from the local fencing shop. And by the time the 1984 Olympics arrived, DeChaine’s talent had become known around the world.

“Since then, U.S. team armorers have been recognized as the best,” Clinton says. “They also figured out why we have the best armorers: We share. And that is Dan. He gave his knowledge and experience freely and asked nothing in return — just help the next one.”

Whenever someone had a fencing equipment problem, no matter how dire, they could count on DeChaine.

Two-time Olympian Molly Sliney points to a tournament from her teenage years as the perfect example of DeChaine’s grace. She remembers arriving at the venue with such pride — pleased that she had prepared her equipment herself.

“I had cut all the wires,” she says. “Dan patiently fixed them all for me and showed me the correct way of doing it without chastising me. He made me feel taken care of.”

Three-time Olympian and U.S. Men’s Foil National Team Coach Greg Massialas remembers the time when, at the 1984 Olympics, foil fencer Jana Angelakis discovered a hole in her back shoe.

“[DeChaine] pulled out a leather patch and sewed it on,” Massialas says. “Truly a great person that would do anything for the fencers.”

That was true wherever the job took him. At the 1985 World Championships in Barcelona, Spain, Team USA saber entrants Peter Westbrook and Steve Mormando faced funding problems, hastily made travel arrangements and flight delays.

The fencers — and their gear — arrived in Spain the night before the competition.

Thanks to DeChaine’s technical wizardry and “no-sleep-till-it’s-done” spirit, Westbrook and Mormando got their equipment approved the morning of the tournament and were able to compete.

“Dan was a good brother and a wonderful human being,” Westbrook says. “They do not make too many men like Dan.”

Learning From the Best

Olympian Carl Borack, who served as team captain alongside DeChaine at the 1988 and 1992 Olympics, had the good fortune of having DeChaine as his personal armorer.

“I’m not kidding,” Borack says. “He built every weapon I fenced with all through my competitive days.”

DeChaine and Borack lived just a few miles apart, and Borack would travel to DeChaine’s house to get his weapons prepared before tournaments.

“In my whole career, I never made or fixed a weapon. I had Dan in my life. How good is that?” Borack says. “I was spoiled by the best.”

At one tournament, Borack remembers being told one of his foils had failed the check.

“I knew since Dan had prepared the weapon, it must be a mistake,” Borack says. “So I went back a few minutes later to have the foil checked again, and, of course, it passed. Dan loved to tell this story.”

For all of DeChaine’s work — “into the wee hours of the morning making sure that all the team’s weapons would pass” — Borack also recalls a lighter side to Dan DeChaine.

When the 1992 Olympic team held its training camp before traveling to Barcelona, DeChaine joined the team in a dance line. He even tried to learn the moonwalk.

“Makes me smile when I think about it,” Borack says. “Dan, you were a legend to the sport, a godsend to the U.S. teams and others who needed your expertise, and one of the best people I have known in my life.” 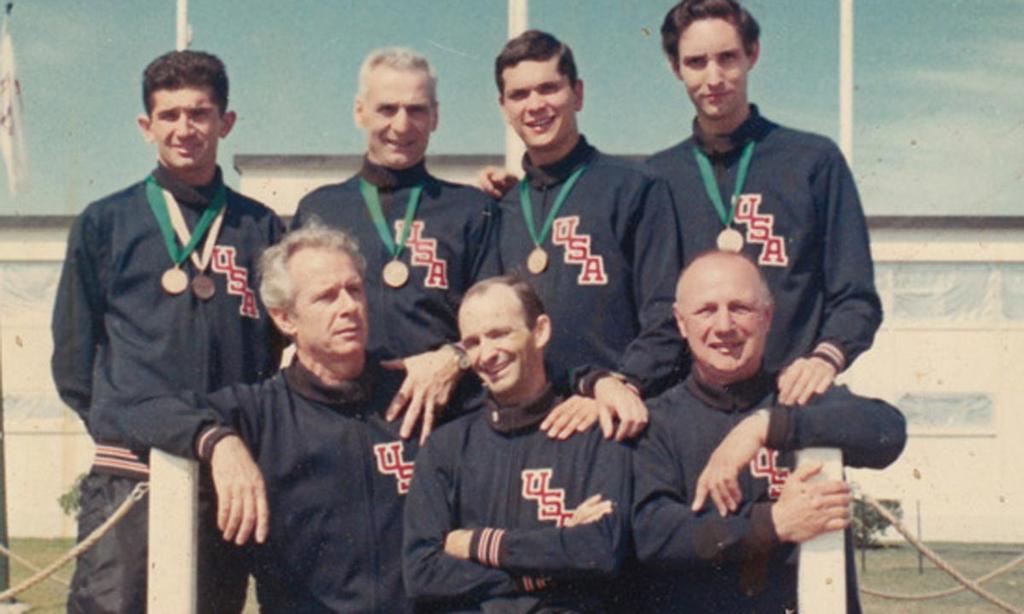 Memories from the Community

“Dan DeChaine was the humanitarian of American fencing — a beacon in the harsh, competitive world, and a moral compass. I will always be grateful for the kindness and inspiration he gave my three children, Jennifer, Jessica and Marty, to my students and me. Just a few minutes of his time would recharge our spirits.”
Fencing coach Connie Yu

“Dan was the guy who not only knew the material rules, he understood why they were there, and what the intent of the rule was. He taught me a lot about how the international SEMI worked and how decisions by it were made. He was always willing to lend a hand, teach me anything, and share a pint of Guinness. He was gracious, kind, and well dressed. I will treasure every moment I had with him.”
Brian Rosen, armorer and member of the U.S. SEMI Commission

“Hardest working team member ever — a terrific guy you could count on for anything.  We spent quite a bit of time together as teammates, with him usually berating me gently about the state of my weapons.”
Four-time Olympian Harriet King

“I remember Dan as one of the most interesting people I ever met. More than the guy on the old Dos Equis commercials! Expert in many things, funny, knowledgeable, advisor, talented, sincere, teacher, storyteller, loving.”
Olympian Phil Reilly

“Dan was a giant in USA Fencing and in the FIE. For generations, he was the authority on all aspects of armory and material rules matters. Dan served countless world and Olympic teams, educated most of our armorers, and was a paragon of integrity and class.”
Donald Alperstein, former president of USA Fencing and current member of the Board of Directors

“Daniel was an extraordinary person, always willing to help any fencer from any country. A loyal friend, passionate about our sport, a good man.”
Víctor Sergio Groupierre, president of the Argentinian Fencing Federation