Join Us for ‘State of Fencing: Access, Inclusion & Sustainable Change,’ a Panel Discussion on Sept. 8

Hear from panelists about how the fencing community can work together to ensure we're creating safe and inclusive spaces for everyone to enjoy the sport of fencing. 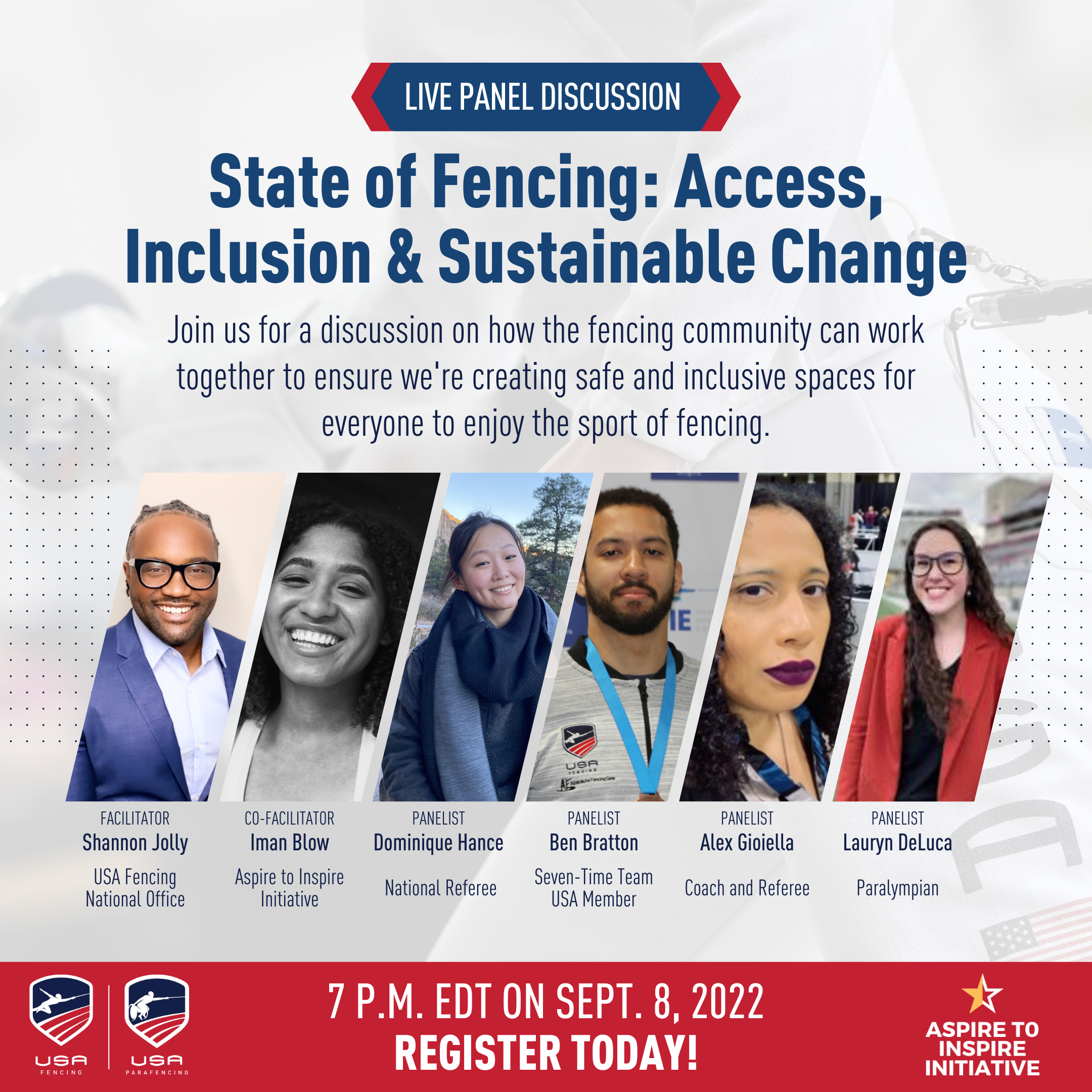 COLORADO SPRINGS, Colo. — What’s the current climate in fencing? How can the fencing community create safe and inclusive spaces so everyone can enjoy our sport? What will it take to push fencing forward in positive ways?

Those weighty — and essential — subjects will be on the agenda during “State of Fencing: Access, Inclusion & Sustainable Change,” a panel discussion scheduled for 7 p.m. EDT on Thursday, Sept. 8.

You can register to attend now and join the discussion on Zoom.

The panel discussion is hosted in collaboration with the Aspire to Inspire Initiative LLC, founded by fencer Iman Blow (Brooklyn, N.Y./Peter Westbrook Foundation).

Blow and other panelists will share their unique experiences in fencing and how they use their agency to push the sport forward in positive ways.

Jolly is the Senior Manager of Diversity, Equity, Inclusion and Belonging for USA Fencing.

Blow is a pre-medical Columbia University graduate and world-class athlete who is passionately involved in performance education and development. Over the past 10 years, Blow has functioned as a coach and athlete-educator while simultaneously managing an award-winning academic and athletic career. After ending the 2020 Olympic season as an alternate for Team USA, Blow continues with the goals of competing in the 2024 Olympic games in France and matriculating into medical school.

As the founder of the Aspire to Inspire Initiative, Blow embodies its mission to inspire athletes through community engagement, education, and mental health awareness. Iman believes that there is a champion in everyone and defines a champion as a person who lives in a way that inspires themselves and others.Through her communal work and personal journey, she aspires to inspire.

Hance has been involved in fencing for the last five years. Based in Indianapolis, she serves as a national referee, member of the DEIB Task Force (Referees’ Commission), and vice chair of the Indiana Division. She is currently working to increase accessibility to the sport and referee development through her local club and the Indiana Division.

Bratton is one of the most decorated men's epee fencers in the history of the United States.  A product of Queens, N.Y., Bratton made history when he became the first African-American fencer to win a World Championship title in fencing as a member of the U.S. men's epee team that won gold at the World Team Championships — a first for any U.S. men's fencing team.   He is a seven-time Team USA member and winner of a silver medal at the Pan-American Games in 2015. Bratton founded Fencing 101, a youth enrichment program that teaches fencing at public schools and youth centers in Harlem and Brooklyn.

In 2020, he was named to the United States Olympic and Paralympic Committee Team USA Council on Racial and Social Justice, where he refines and provides recommendations to the USOPC to enhance oversight of racism and acts of discrimination within the organization. He is currently an assistant coach at New York University and is the head coach at the Fencing Academy of Philadelphia’s West Chester location.

Gioiella is currently a national and international referee for able-bodied fencing, and a national referee for parafencing. She has been refereeing for nearly a decade. Gioiella volunteers her time in her local fencing community, offering insight in para-fencing and helping young referees hone their skills. Gioiella works actively as a CRO and formerly as a CRI to recruit and retain diversity within fencing, and specifically the referee cadre.

In her professional life, she holds a law degree, is the director of a housing program in the Metro-Detroit area focused on stable housing for survivors of domestic violence and sexual assault, and holds several certifications in domestic violence prevention, sexual assault education, and trauma informed care. In her spare time (when not at work or engaged in fencing) Gioiella is an avid archer and enjoys spending some quality time with her guinea pigs.

DeLuca received her undergraduate degree from The Ohio State University in child and youth Studies with a minor in disability studies. Prior to attending university, DeLuca competed at the 2016 Paralympics in Epee (Women’s Category A). As a once-competitive fencer, DeLuca held national championship titles in two weapons while being a Pan American Champion. DeLuca is wildly passionate about creating a more welcoming and engaging environment around fencing and the Paralympic Movement as a whole.