I'll Be Back Next Time 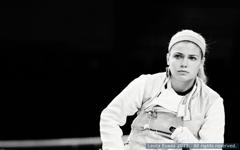 In her latest blog for ESPN.com, Paralympic fencer Cat Bouwkamp (Fishers, Ind.) talks about competing on the world's largest stage and her goals for the 2016 Games in Rio...

Tuesday was the day I fenced in my event (women’s foil Category A) here in London at the Paralympics, and it was rough, to say the least. I went into the experience with the biggest butterflies in my stomach and a lack of confidence in my own skills. I did have an abundance of support, though. With me were my two coaches, Julio Diaz and Les Stawicki, plus two of my amazing teammates, Ryan Estep and Joey Brinson. My parents were also up in the stands, cheering after every point.

One of the weirdest parts about fencing in a big competition like the Paralympics or a World Cup is that I have to be able to fight against people whom I’ve also learned from and have so much respect for. When I started wheelchair fencing three years ago, I had no idea what in the world I was doing... more>