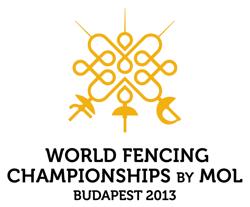 (Colorado Springs, Colo.) – On Monday, Aug. 5, competition will begin at the Senior World Championships in Budapest, Hungary where Team USA will face a field that is expected to include 835 fencers from 100 nations.

Mariel Zagunis (Beaverton, Ore.) holds 10 Senior World and three Olympic medals from a career that has spanned 14 seasons on the senior international circuit. Ranked as the #2 saber fencer in the world, Zagunis is aiming to reclaim her position as the best fencer in the world with a third career individual Senior World title after taking gold in 2009 and 2010.

Zagunis could reach another first in Budapest where she could become the first U.S. fencer to earn both an individual and team Senior World title in the same year as she is joined by two of her teammates from the squads that won bronze in 2011 and 2012 – Dagmara Wozniak (Avenel, N.J.), a 2012 Olympian, and Ibtihaj Muhammad (Maplewood, N.J.) who is fencing on her fourth Senior World Team. Eliza Stone (Chicago, Ill.) joined the national team for the first time this year and made a quick impression with a silver medal win at the Pan American Championships in June. Last month, Stone went from team rookie to team anchor at the World University Games where she led a young American squad to a 45-44 victory over Ukraine – the #1 team in the world. Team USA also earned a key victory over Russia – the three-time reigning Senior World Team Champions – at the final World Cup of the season in Chicago in May. Watch for all three teams to be in contention for gold in Budapest.

Individually, all four U.S. women’s saber team members are ranked in the top 16 in the world which means that they each will be exempt from the individual preliminary rounds and will advance directly to the table of 64.

Soren Thompson (New York City, N.Y.) made history in 2012 when the U.S. Men’s Epee Team became the first U.S. Men’s Fencing Team to win gold at the World Team Championships. Although his teammates are not competing this season, Thompson has anchored the squad to two medals this season – silvers at the Legnano World Cup and the Pan Am Championships. Thompson will be joined in Budapest by first-time Senior World Team members Adam Watson (Richford, Vt.), Jason Pryor (Colorado Springs, Colo.) and Alexander Tsinis (Little Neck, N.Y.)

In London, the U.S. Women’s Epee Team made history when the ladies won bronze and, together with China and Korea, shut European out of the podium for the first time in history. Three members of Team USA will be back in action in Budapest – Maya Lawrence (Teaneck, N.J.), Kelley Hurley (San Antonio, Texas) and Courtney Hurley (San Antonio, Texas) who moved up to a #16 world ranking – and an exemption from the preliminary rounds – after her gold medal win at the Pan Ams. Although Katharine Holmes (Washington, D.C.) will be fencing at the Senior Worlds for the first time, the two-time Junior World medalist won silver in the individual competition at the Pan Ams – the first senior international podium finish for the 20-year-old.

In 2011, Lee Kiefer (Lexington, Ky.) won bronze at the Senior Worlds as a 17-year-old. Now ranked sixth in the world, Kiefer finished fifth at the London Games. Two of her teammates from London – Nzingha Prescod (Brooklyn, N.Y.) and Nicole Ross (New York City, N.Y.) – will be fencing in Budapest as well with Prescod competing at her fourth Senior Worlds and Ross at her third. A silver medalist behind Kiefer at the Pan Ams, Prescod had a breakthrough season this year with a gold medal win at the Marseille World Cup. Margaret Lu (Greenwich, Conn.), a four-time Junior World medalist, will be fencing at her first Senior Worlds.

Men’s foil fencer Gerek Meinhardt (San Francisco, Calif.) won bronze as a 20-year-old at the 2010 Senior World Championships where he became the first U.S. men’s fencer to earn a Senior World medal. During the past three years, the U.S. Men’s Foil Team has climbed the rankings and Meinhardt and his teammates are now ranked as the #2 squad in the world with a gold medal win at the Paris World Cup and silvers during the next three tournaments. Ranked fourth in the world, Meinhardt won two individual silvers and a bronze on the circuit this year and finished the season with gold at the Pan Ams. Alexander Massialas (San Francisco, Calif.) is ranked ninth after a silver medal at the St. Petersburg Grand Prix and bronze at the La Coruna World Cup. Race Imboden (Brooklyn, N.Y.) sits just three ranking points behind Massialas and is 10th in the world rankings after a gold medal finish at the Havana World Cup. A fifth-place finisher at the 2010 Senior Worlds, Miles Chamley-Watson (Philadelphia, Pa.) earned top-eight finishes at the Venice Grand Prix and Seoul World Cup this season.

Men’s saber fencer Daryl Homer (Bronx, N.Y.) earned a career high world ranking of seventh this season. On the heels of a sixth-place result in London, Homer added three more sixth-place finishes on the World Cup circuit as well as a bronze at the Pan Ams. Homer will be joined by his London teammate Jeff Spear (Wynantskill, N.Y.) who will be fencing at the Senior Worlds for the first time. Two other saber fencers will be making their Senior World debuts in Budapest – two-time Junior World medalist Eli Dershwitz (Sherborn, Mass.) and Aleksander Ochocki (Linden, N.J.) who won silver in the individual competition at his first Pan Ams last month.

The complete athlete roster is as follows:

Team staff are as follows: